Does Brittany Have the Right to “Die with Dignity?”

Does Brittany Have the Right to “Die with Dignity?” 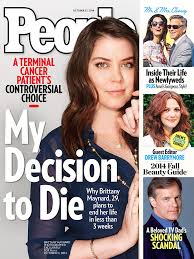 In exactly 9 days (November 1, 2014) a young and beautiful 29-year-old woman is committed to killing herself by taking a handful of pills.  This woman’s name is Brittany Maynard. She is married and has led a very active life. In fact, she has run half marathons,  traveled extensively and even climbed Mount Kilimanjaro (the largest free-standing mountain in the world). A year ago she and her husband were trying to get pregnant so they could start a family. However, on January 1, 2014, she was diagnosed with stage 2 glioblastoma, a malignant brain tumor. They operated and removed the tumor. In April, the doctors discovered that the tumor returned, only now it was stage 4. She was given 6 months to live.

Pro: This form of cancer is very aggressive and attacks the brain. As predicted, she is already experiencing severe migraines, seizures, vomiting…she still has some good days and some bad days, but the good days are dwindling. She knows what’s coming next and it isn’t pretty.   Her mind will soon be unable to tell her body what to do and she will quickly lose the ability to move her limbs, control her bowels and eventually breathe.  It is an awful way to die and there is no cure.  Her choice is to live out her good days to the fullest and die with dignity. When she is asked if she is comfortable with suicide, her response is, “There is not a cell in my body that is suicidal or that wants to die.  I want to live. I wish there was a cure for my disease but there’s not.” She continues, “My glioblastoma is going to kill me, and that’s out of my control,” she says. “I’ve discussed with many experts how I would die from it, and it’s a terrible, terrible way to die. Being able to choose to go with dignity is less terrifying.”

Con: There are several arguments against “euthanasia”  or “death with dignity.” There are those who believe this is a slippery slope. If “suicide” becomes an acceptable end of life option, this could lead to abuse or pressure on loved-ones to take this option. For example, an older adult in a family might feel an obligation to take this option and save loved ones extra stress, money and time. It is also feared that insurance companies might incentivize this option for people dealing with chronic illness. Another objection comes from biblical principles. Many say, “God has a plan and humans should not deviate from this plan for convenience-sake.” There might be late-life lessons to be learned or the illness might be instructive to relatives or friends. For example, a person’s fight might serve as inspiration for someone who is witness to this struggle and then go on to achieve far greater feats with his/her life.  Finally, physicians take a Hippocratic Oath, stating that they will do everything possible to keep a patient alive and that they will, “do no harm.”

Author’s Perspective #1 – Libertarian Perspective: Sometimes I reserve judgment and let the students decide on their own. Other times, I have strong opinions and wage on one side. In this case, I choose the latter. I believe that as humans we have certain rights and that medicine and/or government should stay out of it. I believe that we all have the right to make certain choices and how we choose to die should be among them.  I would hate to have someone or some system tell me that I don’t have that right. I have the right to die for my country and protest my country, and I should have the right to choose how and when I die.  And… so should you.

Author’s Perspective #2: – It’s a moot point: Whether or not you, I or the law agrees, everyone has the choice to end their own life. While doctors and law enforcement agencies have a legal right to try to stop anyone from doing so, almost everyone will have the freedom to make that choice for themselves.  People have done so, are doing so and will continue to do so. It’s difficult to stop a motivated person with a plan.

1. Do you believe that Brittany has the right to die on her own terms or do you think she should allow life to play out as it was intended? Why or why not?

2. Do you believe that government, doctors or other entities have the ethical right to stop Brittany and other terminal patients from ending their lives prematurely? Why or why not?