What Would a Homeless Person Do with $100?

What Would a Homeless Person Do with $100? 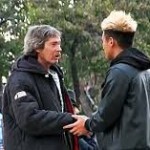 A man ran a simple experiment. He wanted to see what would happen if he gave a homeless person $100.

So, if you can’t watch the above video, Josh walks up to a homeless man (Tom) and gives him $100 and walks away. Josh then secretly follows Tom with a camera to see how he would spend it. Tom immediately puts down his sign, picks up his bag and proceeds directly to the liquor store. Thinking he is about to nab Tom, Josh continues to follow him with the camera. However, acting a lot like Santa, Tom takes food out of his sack and gives it to other homeless people. He gives away pizza, burritos and chips.

Josh confronts Tom, but this time he begins by apologizing, “When I saw you go into the liquor stores, I thought you were going to get drunk,” Josh says, “I’m shocked.” Josh then gives him an additional $100. The two continue the conversation and it leads to further revelations. You see, Tom quit his job to be with his father as he fought cancer last year. His father died and two months later, his mother died. He has been living on the streets ever since then. Tom goes on to remind us that, “There are a lot of homeless people who are a victim of circumstance. They aren’t lazy. One thing just leads to another… A lot of homeless people are good people.”

Joe’s Perspective #1: After doing some investigating, I discovered that Josh initially set out to do an instructive video on why one shouldn’t donate money to a homeless person. His initial suspicions were correct when Tom ventured in to the liquor store. However, Josh was admittedly surprised by the selfless act that followed. Josh was surprised that a homeless man who was begging for money could turn around and basically donate most of that money to fellow homeless people he did not even know.

Joe’s Perspective #2: I think this story reminds us not to stereotype… anyone. To understand someone, you must first get to know a person’s character. How many of us were thinking Tom or any other homeless person would misuse that money at the liquor store? I know I was. Why? Because I hold certain beliefs about why someone becomes homeless. That might be true in some or even the majority of cases, but it’s not fair to put all homeless people in this category. Everyone has a story and their story deserves to be understood.

Joe’s Perspective #3: To complete the journey, Josh found Tom at a later time at a homeless shelter. He took him out for dinner, got him a hotel room, and gave him a makeover – complete with a new suit and a hair cut. Josh is now trying to raise $100,000 to get Tom some housing and job training. I hope it works out. Watch the video below for the 2nd part of the story.

1. Forget what you just saw, what would you have thought that a homeless person would do with $100?

2. Does this change your perceptions of homeless people. If so, in what ways?

3. How will you respond the next time a stranger requests money on the streets?