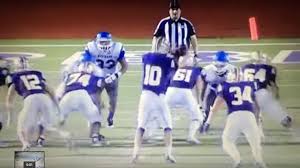 Recently at a high school football game in San Antonio Texas between  Jay High and Marble Falls High School, two players maliciously attacked a referee in the game. There is no debate about this. The video clearly shows one player hitting him from behind and the next player spearing him with his helmet. This was done on purpose and with intent to harm. Watch below to see for yourself.

The two students were immediately suspended from the team and from high school. The district is investigating further to decide a suitable punishment.

PRO: Is there really a debate here. The students deliberately targeted the referee with intent to do bodily harm. If this happened in a classroom, these students would have been arrested, expelled and prosecuted. Because it happened on football shouldn’t matter. Officials lives matter. Officials need to be protected just as teachers and coaches. These kids need to be prosecuted to the full extent of the law. They need to be banned from playing high school sports of any kind at any school in the state of Texas (period).

CON: Why a debate? There are two sides to every story. When questioned about this incident, the students said that the official intentionally made unfair calls and directed racial slurs (the ‘N’ word) at the students. The students also contend that their own assistant coach encouraged this retaliation by saying, “that guy needs to pay for cheating us.” The assistant coach has been suspended for his part. Can you really blame the kids for loosing their composure in such a scenario? These are just kids, right?

Your Turn: If you were in charge of providing a punishment for these boys, what would decide? Does context matter and circumstances matter?