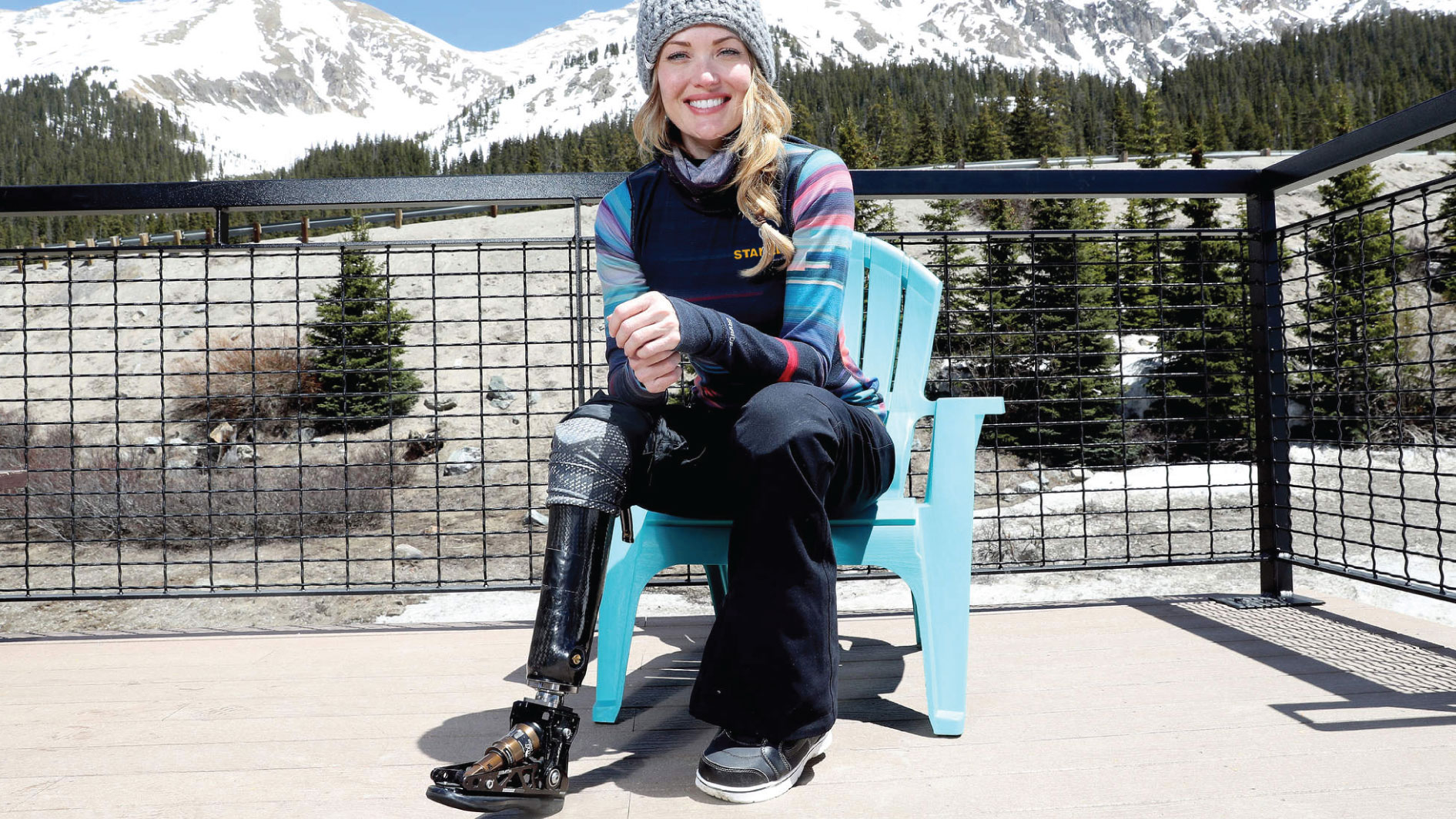 “Faith is taking the first step even when you don’t see the whole staircase.”

Life changes in an instant.

On July 14, 1999, 19-year-old Amy Purdy was an upbeat, vibrant young woman living her dream. She was making $125 per hour + tips working as a massage therapist at several upscale resorts in her hometown of Las Vegas, Nevada. She loved her life and she loved her career. Her only worry was saving enough money to travel the world.

On July 15, Amy left work early because she was feeling ill. When she arrived home, her mother took her temperature and she retired to her bedroom for some rest and recovery. The next morning her mom and dad left for a weekend trip. Her mother felt guilty leaving her daughter alone with a 101 temperature, but Amy reassured her. “Mom, don’t worry about it. I’m sure I’ll be fine.” Unfortunately, Amy did not get better. Her temperature, along with her heart rate rapidly increased. She began slurring her words. Worse, her feet turned purple.

Within hours, Amy was driven to the hospital by a friend. During the intake assessment, the nurse sprinted down the hall, yelling, “I need a doctor.” Amy’s veins and lungs had collapsed. Her blood pressure was dangerously low. She was in cardiac arrest. Sensing the worst, the nurse picked up Amy’s cell phone and called Amy’s mother. The nurse proceeded to describe a parent’s worst nightmare: “We have no idea exactly what’s wrong with Amy, but you need to get here as fast as you can. Her entire body is crashing. And at this rate she has maybe two hours left to live.”

Indeed, Amy had less than a 2% chance of survival at that point. She was in septic shock, her major organs were shutting down, and she was suffering from a massive blood infection. As her heart raced at 226 beats per minute, the attending doctor shouted “Code Blue!” At that moment Amy had what she described as an “out-of-body-experience.” She felt weightless. She floated in the air, levitating above her physical body. It quickly became apparent to Amy that she had died.

Amy saw a light. Within that light were three spirits. Without using their mouths or voices, these phantoms communicated the following message: “You can come with us or you can stay.” Amy responded with all her energy: “No, I’m not going anywhere.” The spirits replied: “You made the choice to return. You will have major challenges in your journey, and you will experience great beauty. In the end, it will all make sense.” And with that, Amy took a deep breath and returned to the living.

These major challenges in her life were immediate and overwhelming. She spent the next several days drifting in and out of consciousness. She was ultimately placed into a medically induced coma. A ventilator was used to breathe for her. She was placed on 24/7 dialysis because both kidneys had failed. When she finally woke up, she scribbled down, “I had a choice, and I chose to live.” But her life had been totally changed. She had bacterial meningitis and both of her legs had to be amputated just above the knees. She also lost 85% of her hearing in her left ear. Amy would remain on dialysis for many months until her father donated his own kidney to save her life.

Despite all these enormous challenges, Amy made three concrete life goals from her hospital bed: I will never feel sorry for myself; I will snowboard again this upcoming season; Once I figure this out, I will help others.

To accomplish the first goal, Amy successfully walked down the aisle of her sister’s wedding within two weeks of receiving her prosthetic legs, and she danced with her father at the reception. Amy soon found gainful employment as a massage therapist again and kept moving forward with her life. Over the next several years, she lived in San Diego, Los Angeles, Colorado, Lake Tahoe and Las Vegas. She fell in love, out of love and back into love several times before ultimately marrying her true love in 2015. Amy carries a smile with her everywhere and she says yes to both big and small adventures. Anyone who knows her story is much more likely to envy Amy than pity her.

Accomplishing her second goal of snowboarding took more than a positive attitude. It required the courage to go down a mountain on a snowboard with prosthetic legs. It didn’t go well at first. Her legs wouldn’t bend and she often fell. Although immensely frustrated and depressed, Amy pushed herself onward. In the process she created her own robotic legs for snowboarding and she improved. Amy now looks back at that difficult period and laughs. “I traumatized all the skiers on the chairlift one day when I fell. And my legs — still attached to my snowboard — went flying down the mountain! And I was still back on top of the mountain.”

Amy’s third goal — helping others fulfill their dreams — took the form of encouraging amputees to lift their goals above walking. She believed that people with physical disabilities   could and should become involved in active sports such as snowboarding, motor cross and skateboarding. Sometimes people just need a helping hand. Unfortunately, Amy discovered that resources for such things were few. So Amy founded an organization, “Adaptive Action Sports,” to make this happen. This effort worked so well that many adaptive action sports became important parts of the X Games and the Paralympic Games.

A highlight of Amy’s childhood had been snowboarding with her father. However, even then she had never thought of herself as a competitive snowboarder. However, when she herself became an adaptive sports person at 33, she began to think of herself as an “athlete.” And, thanks to her and her associates’ collective efforts, Amy now had a place to compete. She began racing in the World Cup Series to accumulate enough points to join Team USA and represent her country. As an Olympian, Amy earned a bronze medal at the 2014 Paralympic Games in Sochi and four years later she earned a silver medal at the 2018 Pyeongchang Paralympic Games.

When she is competing, Amy usually trains about 40 hours a week. However, her daily life goes far beyond that. For example, in 2012, she competed on the Amazing Race and in 2014 she competed on Dancing with the Stars. She has appeared in a Madonna video and a Super Bowl ad. She has acted in movies and has been a runway model. She authored a best-selling book entitled, “On My Own Two Feet.” Her inspirational 2011 Ted Talk spurred a successful career as a motivational speaker.

Right before Amy coded in the hospital bed on that fateful day, her doctor whispered in her ear, “Whatever it is you believe in, Amy, think about that now.” At that moment and throughout her life, her response was and is “I believe in love.” At the heart of this is faith; in herself, in humanity, and in the love that binds everything together. That near-death experience inspired Amy to discover a larger purpose for her life. She has continually pushed for “something more.” The opening line in Amy’s Ted Talk was, “If your life were a book, and you were the author, how would you want your story to go?” Amy wants you to recognize that you are the author of your own book and so you get to choose how your story goes. Every day you get to write a new page. Each significant challenge begins a new chapter. Amy is still writing her story. And so are you.

Amy Purdy is one of the 144 “Wednesday Role Models” featured in the Student Athlete Program. This program is designed to improve the character, leadership and sportsmanship of high school athletes. To learn more about this program and how you can implement it in your school: