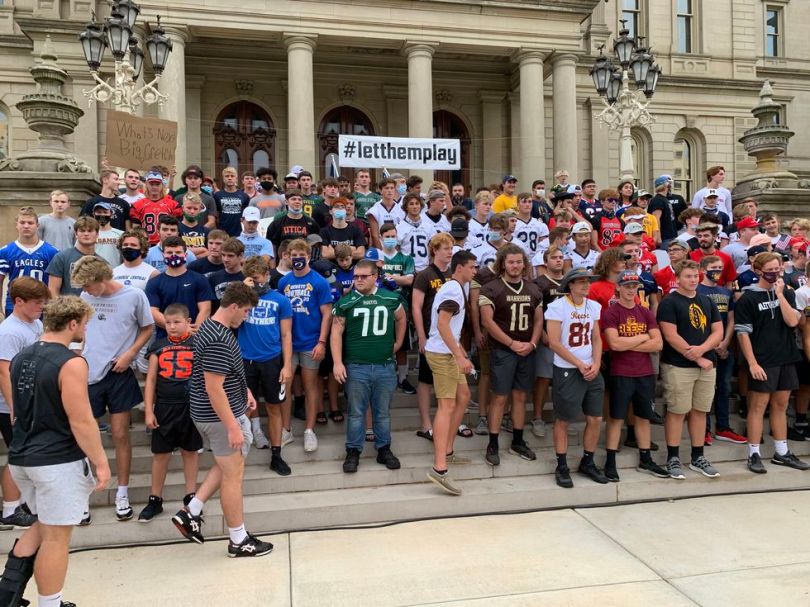 Football Cancelled: On August 15, the MHSAA moved the Michigan high school football season from the fall to a spring sport. This was mainly due to Executive Order 160 from the Michigan governor which essentially stated that contact sports were too dangerous due to Covid-19. Students who played football were devastated, as they had made a commitment to the football team and were preparing for games. Athletic directors across the state had a message for these student-athletes, “Don’t fret young man, this is your opportunity to play another sport.” And so, many of them did. Collectively, they signed up for tennis, soccer, cross country… They made a commitment to a new sport.

Meanwhile, parents were upset. Students were upset. Football coaches were upset. Even members of the MHSAA complained about the the Governor’s mandates. Many took their anger directly to the State Capital to protest. The name of the protest was called, “Let them play.” These protests made an impact on the governor.

Football Reinstated: On September 3, the governor reversed her executive order, which allowed the MHSAA to allow football to proceed in the fall. Based on the timing, it meant a shortened 6 game season, but hey, a win is a win. Everyone is happy, right?

An Athlete’s Dilemma: Football coaches texted their players and told them that football practice would resume. However, all the texts didn’t come back positive. “Coach, I’m now a starter on the soccer team.” “Coach, I’m the #3 singles player on the tennis team.”  “Coach, I broke 18 minutes on the cross country team and I am running as the #5 runner on our cross country team.” Yikes. A commitment is a commitment, but in this bizarro Coronovirus world, each student essentially made two commitments this fall. Should a player have more allegiance to the new sport or football?  Should the student pick one sport? Should they try to play both? Clearly, this is unchartered territory with no one “right” answer.

Placed in this difficult position, athletes talked with coaches and chose different options. Tanner Neuman said, “I’m going to do mainly football and then help out the soccer team with games. That’s what’s going to work best for both teams.” Andrew Williams said, “I don’t know if it’s possible (to play both sports). Football is really competitive. To get the playing time you want, you have to be there every day giving it your all. I have a feeling I’ll have to make a choice.” Caleb Beilby said, “I don’t know what to do now, because I’m trying to do two sports and I just got a job as well. I have a lot to do. I’m planning on doing both practices, run the meets for cross country and play the games for football.”

The return of fall football is leading to a lot of tough decisions for high school athletes."I just wanted something to do," said Hopkins junior Andrew Williams, "I was hoping we'd have a season and it turns out we have two now."Story: https://www.fox17online.com/homepage-showcase/return-of-fall-football-leads-to-tough-decision-for-several-high-school-athletes

Joe’s Perspective: Clearly this is an unintended consequence. It’s also a “good” problem to have. When athletic directors encouraged football players to compete in another sport, they did not anticipate this dilemma. Neither did the athletes. However, this is just another reality of the crazy 2020 Coronavirus year.  I can blame the governor, as many have done. However, it does nothing to solve the dilemma.

Your Turn: If you were going to give these students advice on how to handle this situation, what would you tell them and why?