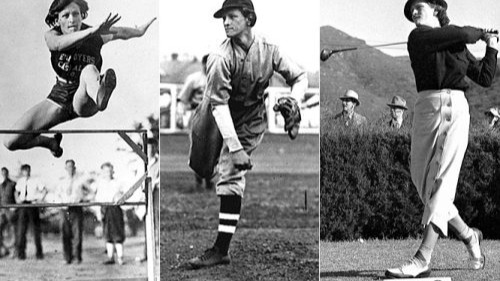 Quick, who is the greatest female athlete of all time? Most people today would probably say Serena Williams for tennis or Simone Biles for gymnastics or Katie Ledecky for swimming or Jackie Joyner-Kersee for track and field or, maybe, even Mia Hamm for soccer. However, only one woman dominated multiple sports in a given lifetime. Only one person won a national championship in basketball, won two gold medals in track and field in the Olympics, and went on to have one of the most successful golfing careers of all time. She also mastered the sports of tennis, swimming, bowling and even played in a few spring-season Major League Baseball games. A reporter once asked her, “You play basketball, volleyball, baseball, football, everything else. Is there anything you don’t play?” This tremendous athlete responded:

“Yeah, I don’t play dolls.” She had only one trigger: She was driven to compete. Across the board. In anything.

This athlete’s name is Babe Didrikson Zaharias. The associated press named Babe the Woman Athlete of the 20th Century. In their own ranking, ESPN Sports Century ranked her as the 9th greatest athlete of the century, and the top-ranked woman. She has won more contests and broke more records than any woman in sports history. Still, most young people reading this story are probably scratching their heads because they never heard the name, Babe Didrikson Zaharias. Don’t feel bad, most Americans today couldn’t name the sport or sports she played. That’s rather sad since she was a true trailblazer for women. We must remember there was a time when male reporters wrote columns about her that essentially said, “It would be much better if she and her ilk stayed at home, got themselves prettied up, and waited for the phone to ring.”

In 1911, Mildred Didrikson was born the sixth of seven children to a poor Norwegian family in Beaumont, Texas. She loved to play games and she usually won. Her thing was, she wanted to compete. It could be a neighborhood marble game or a running race to the end of the block. She hit so many home runs in the sandlot baseball games that the neighborhood boys gave her a nickname. “She’s a regular Babe Ruth. We’ll call her Babe.” Even before she became a teenager, Babe set her sights high.

“I knew exactly what I wanted to be when I grew up,” she later wrote in her autobiography. “My goal was to be the greatest athlete that ever lived.”

With the blessing of her parents, Babe dropped out of high school to play professional basketball. Well, she was paid $75 a month to be a secretary, but her employers were really paying her to play basketball for the company team, Employers Casualty. At a time when entire teams routinely scored 20 points, the 5’ 7’’ 125-pound Babe averaged 32 points per game. In 1932, she was named the MVP and her team won the national championship.

During the off-season, Babe took up other sports, once again competing for Employers Casualty. Even though she had never seen a track meet in her life, she entered and won four events in her first meet. Babe simply had to be the best in any sport. Deep inside, she just had to win and she was willing to work hard to achieve that top level of success. “I trained and trained and trained,” she wrote. “I’ve been that way in every sport I’ve taken up.”

She was the only runner from her team to qualify for the 1932 AAU National Championships. Because the rules allowed her to compete in as many events as she wanted, Babe entered eight of the ten events. In heat that exceeded 100 degrees, she literally ran from one event to the next for two and a half hours. At the end of the meet, her coach exclaimed, “You did it! You did it! You won the meet all by yourself.” By winning five events, Babe had scored 32 points, which was 10 more than the total number scored by the Illinois Women’s Athletic Club. In the process, she broke four world records. “It’s the most amazing series of performances ever accomplished by any individual, male or female, in track and field history,” wrote George Kirksey, a reporter for the United Press.

Some two weeks later, Babe was competing for another team, the United States of America, in the 1932 Summer Olympic Games. In the 80-meter hurdles, she broke the world record and beat her teammate by less than an inch. In the javelin, she set another world record by winning the competition by several feet. In her final competition, the high jump, her fellow teammate had just set a world record of 5 feet 5 ¼ inches. Babe ran up to the bar and cleared it. However, the judges declared that her jump was ineligible because she led with her head. It’s the same form that she used all meet, but the judges held firm. Babe was awarded the silver medal. The following year, that rule was eliminated.

At the ripe old age of 21, Babe felt like she had mastered track and field. She needed a new challenge. While on vacation in California, she visited a golf course. She met a golf pro named Stan Kertes and asked for a couple of lessons. In an instant, Babe was hooked. “Most things come natural to me,” Babe said. “And golf was the first that ever gave me trouble.” She worked with Stan daily and didn’t leave Los Angeles for six months. She arrived at 9 in the morning and often stayed until dark. “She hit ball after ball until her hands began to bleed,” Stan remembered. “And I had to make her wear gloves and finally beg her to stop and rest. I knew she had the makings of a champion.”

When Babe ran out of money, she moved back home to continue her instruction at the Dallas Country Club.  Two years later, Babe entered the Texas State Women’s Amateur Championship and won. “Staging a sensational finish, the irrepressible Babe Didrikson Saturday rudely upset the polite circles of women’s golf in Texas,” wrote an AP reporter. “The tom-boy girl took up golf only two years ago.”

As the winner of this prestigious tournament, Babe qualified for the Women’s US Amateur. However, the United States Golf Association ruled Babe ineligible. In that era, there were only two tournaments that a professional could play. The most prestigious tournaments were all amateur events. The United States Golf Association deemed Babe as a pro because she accepted prize money for some of her earlier appearances in basketball and track. At the time, many viewed this ruling as a way to keep someone of her meager social standing out of what then was an elite socialite golfing world. Babe’s supporters used the phrases, “big joke” and “dirty deal”. Nonetheless, the USGA ruled that Babe had to forgo any revenue or sponsorships in sports for three years to earn back her amateur status.

For several years Babe thumbed her nose at the USGA. She signed endorsement deals for golf apparel companies. She toured the country with Gene Sarazen, a top male pro, and took on other twosomes in big-money matches. She even played with the boys in a couple of events on the PGA Tour. She made the cut in the Los Angeles Open, making her the only woman to make a cut in a PGA event. She also entered the two women’s events that would allow a professional, and usually won.

Babe was making a lot of money in those years. In fact, she was making more than most male professional athletes. However, she was not satisfying her desire to compete against the best golfers. “What I really wanted in golf was to compete and win championships,” Babe recalled. “I’d much rather be competing for the fun of the game than just playing for money.” So, in 1940, she began her three-year hiatus from endorsements and prize money.

Of course, 29 years old with all this time on her hands, Babe decided to master another sport. This time it was tennis. She took lessons from Eleanor Tennant, the club pro at Beverly Hills Tennis Club. She applied her work ethic and quickly became a force on the court, routinely beating the best tennis players in the area. However, the United States Lawn and Tennis Association would not allow her to play in any sanctioned event… ever. They ruled that anyone who had previously been a pro in any sport was ineligible to ever play amateur tennis. Despite playing for two years, Babe gave up the game cold turkey. “I have to be able to try for championships. So I quit tennis cold. I still have racquets, but I haven’t touched them from that day to this.”

By this time, Babe’s hiatus from money winnings was completed and she received her amateur status in golf. She immediately began dominating her opponents. Babe won 17 straight tournaments. This was a feat never equaled by any woman or man in the game of golf. Moreover, in the span of only a few years, Babe went on to win every major tournament available that she could win.  At the end of her career, she had 82 victories.

In 1947, Babe wanted to bring the women’s golf game to the level of the men’s game. She joined with fellow golfer Patty Berg to start the Ladies Professional Golf Association (LPGA). She recruited other women to play. She attracted sponsorships to fund professional tournaments. Under her leadership, the prize money grew from $15,000 in 1949 to $225,000 in 1953. “Babe changed the game for women — not only by bringing along the LPGA, but by her kind of golf,” stated Berg. “She came along with that great power game and it led to lower scores and more excitement.”

Babe continued to dominate women’s golf until she was diagnosed with colon cancer in 1953. But, even then, 42 years old and wearing a colostomy bag, Babe won the U.S. Women’s Open Championship. The next year, the Associated Press voted her the Outstanding Female Athlete of the Year which was the 6th time she had received this award. At the time of her death in 1956, she was still ranked the #1 golfer in the world. While lying on her death bed, she still had her golf clubs in her room. The final words she uttered to her husband, George Zaharias were “George, I hate to die. I’m just learning to play golf.”

Babe’s legacy in sports is cemented in history. Babe created excitement everywhere she went. She was the first legitimate female sports star in history. She brought in a six-figure annual income, which was more than almost every male athlete in her era. Still, she is most remembered for her competitive spirit. As friend and fellow competitor, Betty Todd said, “She wanted to win. I don’t care what she was doing — cards, pool, ping-pong, it didn’t make any difference.” True to form, whether it was basketball, running or golf, she regularly arrived in the locker room and said, “Okay, Babe’s here! Now, who’s gonna finish second?”

Babe Didrikson Zaharias is one of the 144 “Wednesday Role Models” featured in the Student Athlete Program. This program is designed to improve the character, leadership and sportsmanship of high school athletes. To learn more about this program and how you can implement it in your school: