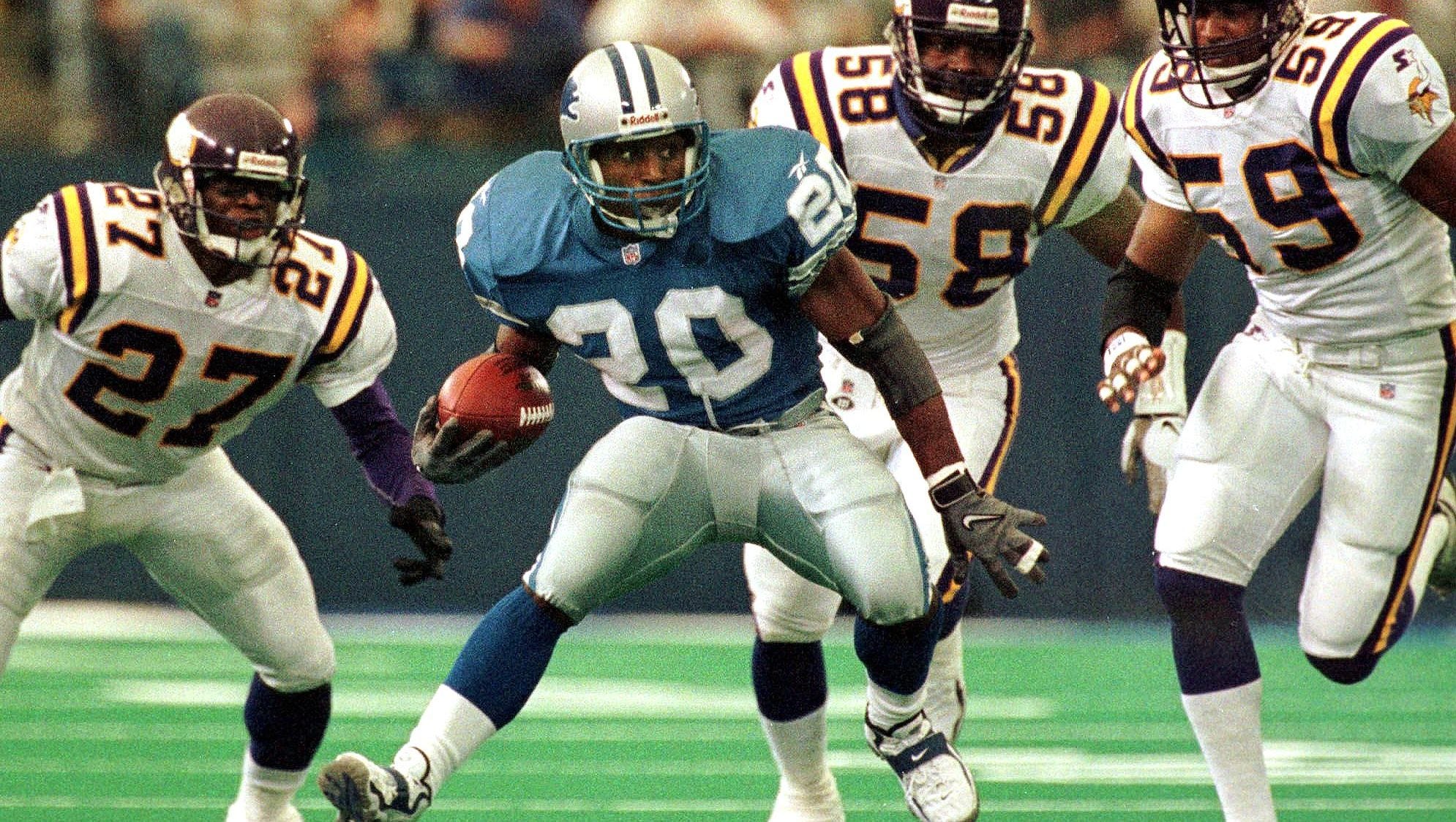 “Happiness does not come from football awards. It’s terrible to correlate happiness with football. Happiness comes from a good job, being able to feed your wife and kids.”

Statistics do not adequately tell the story of Barry Sanders. To fully understand why many call him the “greatest running back of all time,” you really need to watch a highlight video of him in action. He had all the moves to make the best defenders look silly. He juked, he spun, he jump-stopped, he reversed field, and he sprinted away from defenders — and that was just one play. Defenders who had a clean shot at the man would grab air as Barry ran right on by. Barry spent his entire career with the hapless Detroit Lions. Even though the Lions hardly ever did well, people watched those games just to see what Barry would do. “You can’t ask a person in Detroit to name their favorite run of Barry because that would imply there was just a handful and you could remember one,” said Joe Dumars, longtime Detroit Pistons guard. “He did something great every Sunday. Barry really was a “human highlight reel.”

Barry played ten seasons in the NFL and was a pro-bowl selection each of those seasons. He led the league in rushing four times and was the NFL’s Most Valuable Player in 1997.  The man scored 109 touchdowns in his illustrious career. Yet, at the end of each of those 109 touchdown runs, Barry simply flipped the ball to the closest referee. That’s it. He acted like he had been there before and that he planned on returning very soon. No touchdown dance. No “Look at me!” celebration. Barry just wasn’t that kind of person. To Barry, he was just doing his job, and doing it well didn’t require a celebration. The man was humble to the core. He always let his on-field actions do the talking.

Today we see all kinds of celebrations in football. Players score a touchdown and celebrate by spiking the ball, throwing the ball into the stands, dancing, pulling out a sharpie marker and signing the ball, and a lot of other “Me!” “Me!” “Me!” celebrations. Today, even when his team is down by 30 points, a linebacker will make a tackle and start dancing. This was never Barry Sanders — the ultimate team player and sportsman. Most players and fans found Barry’s matter-of-fact manner both classy and refreshing. They respected him for it. Barry never showboated or taunted opposing players on the field even though he certainly could make them look foolish at times. Instead, he helped opposing players up off the ground and patted them on the head as if to say “well-done.”

So, why was Barry so humble? Look no further than his childhood environment. Barry grew up in Wichita, Kansas, and was the seventh child out of eleven children. His parents were determined to teach Barry and his siblings the importance of being a good person and what it meant to have character.  His father was a hard-working roofer who was very strict around the house. On many occasions, Barry and his older brothers helped his father with roofing jobs. The boys never asked for any payment even though it was back-breaking work. They realized how hard their father worked and their payment was having a roof over their heads and food on the table. Barry could never get over how some of his classmates received an allowance for no reason other than just being alive.

Given his talent, you might think Barry Sanders had a distinguished prep career. But that was not the case. He did not start until the fourth game of his senior year at Wichita North High School. In those seven games, he rushed for 1,417 yards, averaging 10.2 yards per carry. This late achievement earned him all-state honors but, because it was such a brief time on the field, it didn’t provide him with much college exposure.

Barry did sign an offer from Oklahoma State University but, because he was playing behind future NFL Hall of Famer Thurman Thomas, Barry’s first two college seasons were much like what had happened in high school. He sat on the bench. But then, in his junior season, Barry finally earned the starting running back job — and he shined. Barry turned in what is now considered one of the greatest individual seasons in college football history. He led the nation, averaging 8 yards per carry and more than 200 yards per game. He set multiple college records that year by accumulating 2,628 rushing yards, 3,248 total yards and scoring 39 touchdowns. With stats like this, Barry easily won the Heisman Trophy for being the nation’s most outstanding college football player.

The secret was out. Barry no longer would be spending time on the bench. The Detroit Lions selected Barry with the 3rd pick in the 1989 NFL draft. The Lions let Barry do his thing. At the end of that first season, he was named the NFL offensive rookie of the year. He also was well on his way to re-writing the NFL history books. As Lions commentator Jim Brandstatter later would say, “Barry was the absolute X factor of any football team, that could bring you from the depths of despair to the height of joy in one carry.” In 1994, he was named the NFL Offensive Player of the Year. In 1997, Barry became the third person in NFL history to rush for more than 2,000 yards in a season.

There is an irony here. Despite all of Barry’s personal success and his focus on “team,” the Lions only won one playoff game in his tenure. But, here’s the most important point of this story and the sole reason you are reading this short biography: Although Barry was absolutely electric on the football field, he continuously demonstrated incredible humility on and off the field. Barry never forgot that he didn’t achieve success alone and he never looked for recognition. Instead, as Barry pointed out, “Maybe a good rule in life is never become too important to do your own laundry.” He truly believed that being a football player didn’t make him a better human being than anyone else.

When thousands of people are cheering you in the stands, and millions of people are watching you on TV, it would be easy to forget who you are. But Barry never did. He just seemed to have zero ego. Barry clearly defined success and happiness differently than other stars. “Happiness does not come from football awards. It’s terrible to correlate happiness with football. Happiness comes from a good job, being able to feed your wife and kids,” Barry quietly said. “I don’t dream football. I dream the American dream – two cars in a garage, be a happy father.”

To recognize this about Barry, and to respect it, makes what happened next easier to understand. Barry had just completed his tenth professional season and was in the prime of his career. He had accumulated 15,269 rushing yards, which is still the highest total rushing yards ever by any NFL player in a 10-year span. At the time, he was just 1,457 yards short of breaking the NFL’s all-time rushing record. However, just before the season, Barry inexplicably decided to retire. There was no fanfare, no goodbye tour, no press conference with tears running down his face. Instead, Barry announced his retirement in true Barry style — he faxed a letter to the Wichita Eagle, his hometown newspaper.

Fans and players were outraged by his decision to retire. “How could he do this when he is so close to the record?” Barry responded: “In all the time that people have known me, has anyone heard me talk about the importance of rushing records or finishing with the most touchdowns? So, if that’s never been important to me, then why would that be a motivation to keep playing?”

In 2004 Barry was inducted into the NFL Pro Football Hall of Fame. He chose his father to do the honors of introducing him. On this huge night, it wasn’t difficult to understand where Barry learned humility. His Dad introduced him as the third greatest running back of all time, deferring his praise to the great Jim Brown. Barry didn’t even seem to notice. When he took the stage, he never even mentioned his individual accomplishments. Even with the spotlight on him, his humility shined brighter. He thanked everyone who helped him become the man that he had become – his coaches from every level, childhood friends, teammates and, of course, family. His speech was short and sweet.

As you might expect, Barry has maintained a low profile in retirement. He doesn’t broadcast games or appear in a lot of commercials. He is a father to four children and that seems to be enough for him. He has a strong faith and lives by certain principles. While humility might be his defining trait, he also is respectful, gracious, and a man of integrity. His example reminds us that when the spotlight comes, maybe it is best to simply hand the ball to the ref.

Barry Sanders is one of the 144 “Wednesday Role Models” featured in the Student Athlete Program. This program is designed to improve the character, leadership and sportsmanship of high school athletes. To learn more about this program and how you can implement it in your school: