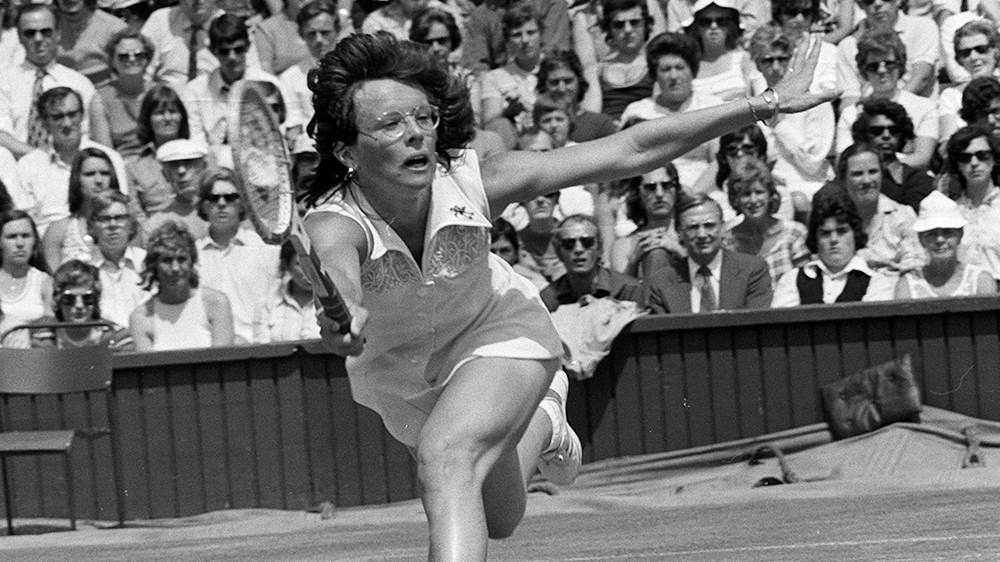 The highest national honor that can be given to a civilian is the Presidential Medal of Freedom. Billie Jean King is the first woman to receive it. One reason is that she was the most dominant female tennis player of her time. But perhaps the most important reason is the social change she created off the court. Long before today’s focus on the equal rights of women, Billie Jean King had been pushing the envelope of gender equality in professional sports. Her focus on  social change was cited as the main factor when Life Magazine named her as one of the “100 Most Important Americans of the 20th Century.” History will undoubtedly remember her as one of the most powerful and influential female athletes of all time.

Billie Jean’s story begins in 1954 when she was a preteen. One day she was invited by a friend to take a tennis lesson at a fancy country club. Billie Jean liked that experience so much that, when she got home, she told her mother, “I’m going to be the number one tennis player in the world!” And she meant it. From that point on, Billie knew exactly what she wanted to do with her life and she showed everyone around her that nothing was going to stop her.

Within a year of that first lesson, Billie Jean’s developing talent led her to compete on a broader scale. However, these new tennis experiences opened Billie Jean’s eyes to a world where women and men weren’t treated equally. This was during the 1950s and women had few opportunities to participate in organized sports and, when they did, they weren’t always taken seriously. In fact, in 1955, Billie Jean learned firsthand how social injustice felt. She was competing in a Los Angeles Tennis Club tournament, and she was excluded from a group picture because she wore tennis shorts instead of the traditional skirt. Although it was a subtle form of discrimination, this action had a profound effect on Billie Jean. She later would identify it as a crucial event that shaped her lifelong mission as a woman in sports.

Billie Jean’s accomplishments as an athlete are incontrovertible. She was a rising tennis star in the decade following that wardrobe misadventure. She was setting records continually and, in 1966, Billie Jean earned the rank of # 1 female tennis player in the world — a rank she repeated seven times in the next 10 years. In that period, Billie Jean had won a record 20 Wimbledon titles, 13 United States titles, four French titles, and two Australian titles for her final total of 39 Grand Slam titles.

In the process of all of these accomplishments in professional women’s tennis, Billie Jean had become increasingly aware of how women were being discriminated against. “Acceptable” attire for women on the courts was just the just the tip of the iceberg. For example, throughout the 1960s and 1970s, male tennis players received an average of 11 times more in tournament payouts than female players. Billie Jean decided to focus on this clear sign of gender discrimination and inequality. And, because she was ranked # 1, and for so long, Billy Jean had a platform from which to get and keep her nation’s attention on that issue: “Unless I was number 1, I wouldn’t be listened to.”  She made it her mission to empower women and educate men on the importance of “equal pay for equal play.”

In the 1970s Billie Jean began a heroic — and historic — fight for gender equality in women’s tennis. Her voice rang loud as she petitioned for equal prize money for all players. Along with nine other prominent players, Billie Jean formed a new women’s tour called the Women’s Tennis Association. Their goal was to boycott the US Open unless the $15,000 payout difference between men and women was leveled. And, in 1973, it worked! Billie Jean’s efforts changed history when the US Open became the first major tournament to offer equal winnings.

Your parents may remember how, shortly thereafter, a retired male tennis pro named Bobby Riggs gave Billie Jean a once-in-a-lifetime opportunity to promote her cause through a primetime television event. This sexist male stated that women were “beneath” men on the court and that “women belong in the bedroom and kitchen, in that order.” He went on to say “Women play about 25 percent as good as men, so they should get about 25 percent of the money men get.” And, to prove his point, Riggs challenged Billie Jean King, the #1 ranked female tennis player in the world, to a televised match. Billie Jean found his accusations so outrageous that she accepted his proposition.

On September 20, 1973, the historical event known as “Battle of the Sexes” captivated an estimated 90 million viewers across the globe, classifying it as one of the most watched sporting events in history. Billie Jean won all three sets, 6-4, 6-3, 6-3 in convincing fashion and deservingly took home the winner-take-all prize money of $100,000. After the event, Billie Jean put the moment into context for us: “This match was about social change. I thought it would set us back 50 years if I didn’t win that match. It would ruin the women’s tennis tour and affect all women’s self-esteem. To beat a 55-year-old guy was no thrill for me. The thrill was exposing a lot of new people to tennis.”

As it turned out, the legendary match influenced Americans everywhere. Women felt confident and began asking for raises, and a generation of men who would have daughters were thankful that they were able to witness such social progression. One such future dad was former US President Barack Obama: “I saw that match at 12. And now I have two daughters, and it has made a difference in how I raise them.”

Billie Jean’s movement in the 1970s  remains influential today. Pay equal to male players is the status quo of women’s professional tennis around the world. Serena Williams recently observed “I feel like all women — not only in tennis, but all sports — really owe everything to Billie Jean King. Everything that she’s done for us, demanding equal prize money, demanding equal pay, really makes me want to focus on, not what I do on the court, but (also) what I do off the court.”

Billie Jean’s social movement is currently shaping the expectations of women in other professional sports. For example, the US women’s soccer team recently filed a gender discrimination lawsuit against the US Soccer Federation. Their complaint claims that, despite having more international success than the men’s team, including more television viewers, their players are being paid considerably less than those on the US men’s team. Becky Sauerbrunn, veteran defender for the US women’s soccer team, recently said, “We have been inspired by Billie Jean King, Venus Williams, and those who came before us, and fought for equal prize money. We keep building off each other, and we’re just hoping that it becomes something that people and companies and federations can’t ignore.”

Billie Jean has always been on the forefront of equal rights and she is known for acting ahead of her time. Although she grew up in an era in which gay rights often were frowned upon, she pushed her nerves and fear aside and publicly came out in 1981. This declaration made her one of the first openly gay female athletes of our time. Her rationale was simple — she wanted to help others in the same situation, and she wanted the world to start accepting human diversity. “It’s just really important that we start celebrating our differences. Let’s start tolerating first, but then we need to celebrate our differences,” said Billie Jean.

Currently, Billie Jean continues her fight for gender equality through a philanthropic foundation. It is called the Billie Jean King Leadership Initiative and its goal is to help people of all races, gender, and sexuality reach their full potential in the workforce by encouraging  corporations to embrace those with different lifestyles. Billie Jean often shares these words of advice to her audiences: “Look at the person, look at their heart, look at their inner success and really go from there, no matter what their sexual orientation is.”

Sir Issac Newton famously said, “If I have seen further than others, it is by standing upon the shoulders of giants.” In this story, Billie Jean King is the giant who changed the role of women in sports. Chris Evert, a tennis great in her own right, appropriately placed Billie in her proper context as not just a sports legend but an icon. “She is the smartest and wisest person I have ever met in my life. Every woman tennis player, every woman athlete should thank her personally for building up a sport and confidence and power in women.”

Billie Jean King is one of the 144 “Wednesday Role Models” featured in the Student Athlete Program. This program is designed to improve the character, leadership and sportsmanship of high school athletes. To learn more about this program and how you can implement it in your school: