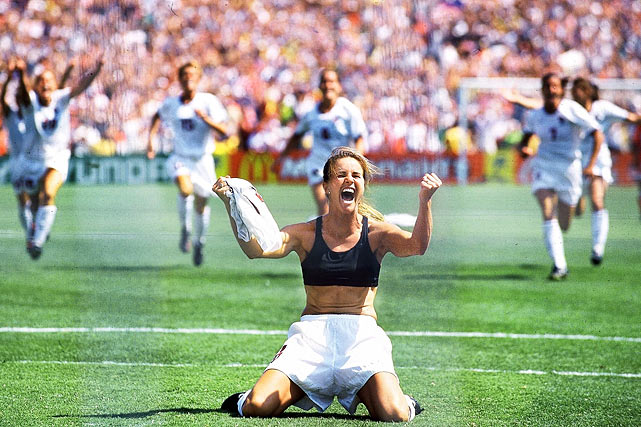 “Wow! Unbelievable! It was relief, satisfaction, joy, everything rolled up into one moment.”

Men’s soccer has been around for a long time. The first Men’s Olympic soccer game was played in 1900 and the first men’s FIFA (Federation International Football Association) World Cup was held in 1930. Their games have routinely sold out stadiums around the world. In 1991, FIFA added a women’s competition. Team USA won this inaugural event in Japan. Upon arriving back to the states, the team expected to be greeted by mobs of people at the airport or perhaps a parade. Instead they were met with silence. When Team USA won the first Olympic gold medal in women’s soccer at the 1996 games, NBC had not even provided a live broadcast of the final game. The average attendance at the 1995 Women’s World Cup was 4,316. One game was played in front of 665 fans. It was a humble beginning for the pioneers of women’s soccer.

This all changed in 1999 when America served as the host nation for the women’s World Cup. FIFA had dreamed big and booked major U.S. stadiums in which to play each game. A marketing campaign was launched to spur interest. However, no one really knew how many people would turn out. The opening game was played in New Jersey at Giants Stadium. On the way to the game, the bus carrying Team USA got stuck in traffic. U.S. Team captain Julie Foudy was frustrated and annoyed.  She asked, “What is the traffic jam going into Giants Stadium, like what are all these people doing?” The answer became obvious when the bus reached the stadium – 78,972 fans had arrived to watch the game. Another 50,484 people attended an elimination game in Foxboro, Massachusetts. The US team dominated the group of teams they were assigned to play. They beat Germany in a quarterfinal match in Baltimore, Maryland. In their semi-final match, they shut out Brazil in Stanford, California, in front of 73,123 fans.

The stage was set. On the 10th of July, 90,185 fans filed into the Rose Bowl in Pasadena, California to watch the largest women’s sporting event in the history of the world. President Bill Clinton and the First Lady also decided this was too big to miss. Another 40 million televisions tuned in worldwide to watch the finals – China vs. the United States of America. Los Angeles Times writer, Grahame Jones put the game into perspective when he said, “For the first time a group of female athletes captured the attention of the world.”

The game was a defensive struggle. Neither team managed to score a goal through 90 minutes of regulation time. The game went into overtime, but again both teams came up empty. This game would be settled in a shootout. The rules of a shootout are simple. In alternating fashion, each team gets five penalty kicks from 12 yards out. The only person between the ball and the goal is the goalie. The team with the most goals wins. Both China and USA easily scored on their first two goals. However, the game changed when USA goalkeeper, Briana Scurry, blocked Liu Ying’s attempt. The next four kickers sent their shots into the net, setting up the final shot by the Americans.

Brandi Chastain was given the vital assignment to score the winning goal. She carefully placed the ball and waited for the referee’s whistle. Thousands held their collective breathes. Her teammates anxiously watched from midfield. Chastain then took four steps toward the ball and kicked it toward the right post. China goalkeeper Gao Hong dove toward the ball, but couldn’t reach Chastain’s well-placed shot.

Chastain instinctively ripped off her jersey and swung it around like the men do after a big goal. She momentarily fell to the ground with clinched fists. She grinned from ear to ear. Her teammates sprinted toward her and mobbed her with pure excitement. Smiles, shouts and tears followed.  It was pure euphoria and unbridled enthusiasm. Can you imagine a more dramatic scenario? The host team wins in a penalty-kick shootout in front of the largest audience to ever see a women’s sporting event? If Hollywood wrote that script, you wouldn’t believe it.

This sporting event changed the landscape of women’s sports, particularly women’s soccer. The media couldn’t write enough stories about the USA victory. Mainstream America began to show interest in this sport. Accordingly, television contracts were signed with ESPN to broadcast more games in the future. A professional league was launched with eight teams located in major cities across the country. Thousands upon thousands of young girls went out for youth soccer around America. It was a cultural shift.

That championship game set the table for everything that would come later. The women that played in that game became known as “The 99ers.” While Mia Hamm became the face of that group, Chastain provided the lasting image. The photo of Chastain swinging around her jersey is arguably the most iconic moment in the history of women’s sports. At least that’s what ESPN decided when they counted down their “Greatest Moments in Women’s Sports”. In 2016, this photo was voted the second-most iconic cover in the history of the magazine, behind the 1980 “Miracle on Ice” photo of the triumphant USA hockey team from the Lake Placid Olympics.

Brandi Chastain always brought a high level of enthusiasm to the game. When she was a child growing up in San Jose, California, she played on the junior high boy’s team because her school didn’t provide a girl’s team. She then led her girl’s high school team to three consecutive state championships. She starred at the University of California, Berkeley, and then later did the same at Santa Clara University. As a member of the US National Team, she won 2 gold medals (1996 and 2004) and one silver medal (2000). Two of her national teams also won the FIFA Women’s World Cup (1991 and 1999). She went on to play professionally from 2001 to 2010 and then retired at the age of 40. In 2017, Chastain was inducted into the National Soccer Hall of Fame.

In 2005, Chastain authored a book entitled, It’s Not About the Bra: Play Hard, Play Fair and Put the Fun Back into Competitive Sports. When asked about her 1999 celebration years later, she said, “It was momentary insanity, nothing more, nothing less. I wasn’t thinking about anything. Wow! Unbelievable! It was relief, satisfaction, joy, everything rolled up into one moment.”

Perhaps that moment will live on forever because of what it represents. It was that moment when a female athlete showed the world that her sport can be just as exciting as men’s soccer. “Nobody knew the impact that this game would have,” said 2005 USA team member, Cat Reddick. “The idea that these were athletes, as opposed to female athletes. There was an acceptance of the fact that the woman athlete was not just here to be on the sideline anymore. They wanted to be on the field.”

The lasting image of Brandi Chastain also reminds us that enthusiasm and passion should serve as the foundation of all athletics. We play sports because it’s entertaining, it’s fun, and it’s exciting. There should be smiles on faces. Athletes should embrace the moment and celebrate victory.  “We are not the first and we definitely won’t be the last,” Chastain reflected. “But, I think we’ve had an important impact on our culture.”

Brandi Chastain is one of the 144 “Wednesday Role Models” featured in the Student Athlete Program. This program is designed to improve the character, leadership and sportsmanship of high school athletes. To learn more about this program and how you can implement it in your school: