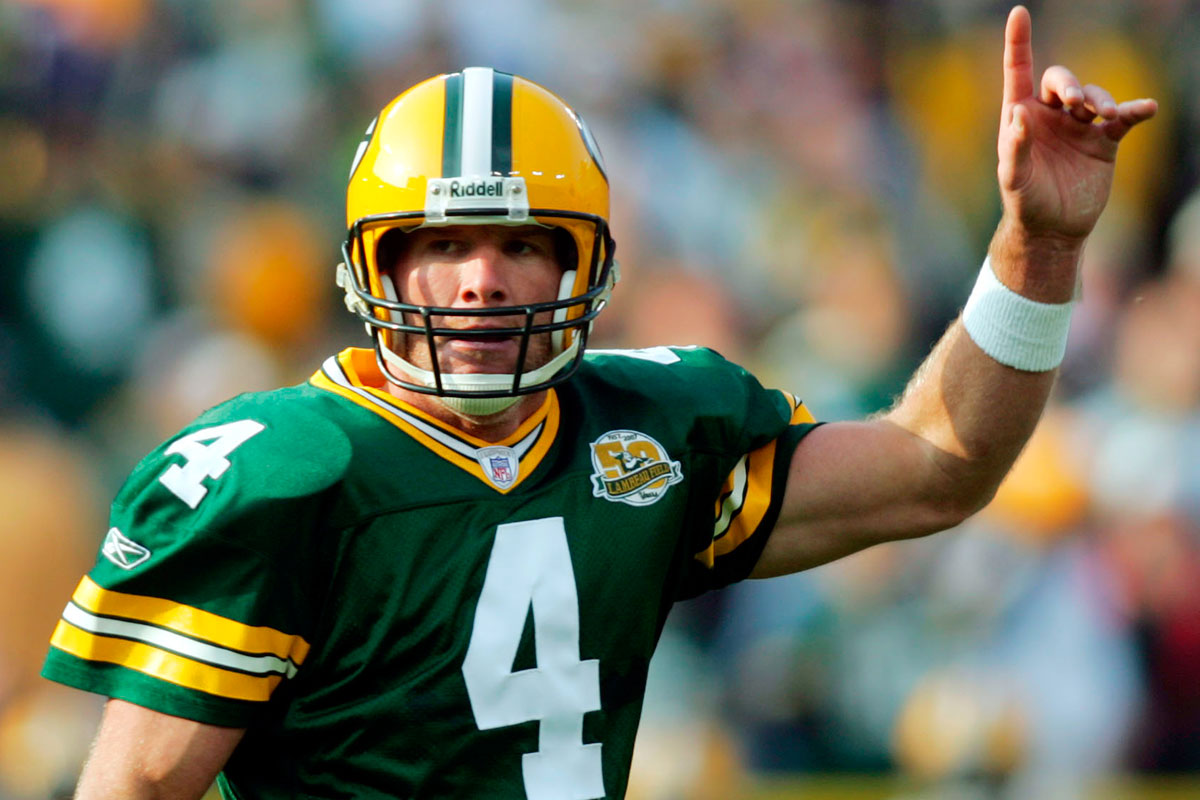 “I look at this game as being brutal, and you’ve got to get up if you can. Other players don’t look at it that way. But jumping up, and pumping up our players and fans, it may give us an advantage. I’ll use anything I can, including my body.”

Only a select few have what it takes to become a professional football player in the National Football League. Of those select few, only a small portion have what it takes to forever write their names in history. Brett Favre has done exactly that, and he will be remembered as one of the best quarterbacks to ever play the game. But what made Brett Favre special compared to other quarterbacks? Undeniably, his athletic ability, arm strength and knowledge of the game are key factors. But, overall, it’s Brett’s grit that made him legendary.

The average career of an NFL player lasts only three years. Players lose a step, become injured, or someone better comes along to take their position. However, this was not the case for Brett Favre. He played professional football for 20 years and set many records along the way. He won a Super Bowl in which he was game MVP, he was named NFL MVP three consecutive years, and he was invited to 11 Pro-Bowls. Perhaps most impressive of all, Brett started 321 games in a row. Most players can’t even start every game in a season, because of uneven performance or injury. Brett Favre had a special something that separated him from the rest —grit.

Brett was the starting quarterback for Hancock North Central High School in the small town of Kiln, Mississippi. His father was the coach and despite Brett’s talents as a passer, Coach Favre ran the wishbone offense. Brett rarely threw more than five times a game. As a result, Brett received only one scholarship to play football, and it came from the University of Southern Mississippi. For the record, it was the last scholarship they awarded that year. The coaches recruited him to play defense, but Brett insisted on playing quarterback. So, at the beginning of his freshmen year, he was ranked 7th on the depth chart. As a testament to his will to compete, Brett moved all the way up the depth chart and started the third game of the season. He never relinquished that role, becoming a four-year starter.

Before his senior season, Brett and several college teammates decided to go fishing off the Gulf of Mexico. Afterward, Brett faced a long, 95-mile drive back home. Brett made it close to home before his car flipped over several times. He almost died. He had serious injuries to his mid-section and doctors had to remove thirty inches of his small intestine. The attending physician told Favre that these injuries meant that playing football would not be an option for his upcoming senior year. Brett replied, “Just watch me.” Just two months later Brett led his team to an upset 27-24 victory over powerhouse Alabama in his first game back, and to an overall 8-4 record on the season.

Following college, Brett made his mark on the NFL. This future Hall of Famer didn’t play much during his first season with the Atlanta Falcons. In fact, he was traded in his second year to the Green Bay Packers, and that’s when he started making history. Brett was named the starting quarterback for the Packers in a game against the Pittsburg Steelers on September 27th, 1992. He then never missed a game for the next 18 ½ seasons.

You need to be incredibly tough to complete 18 ½ years in the NFL without missing a start. Brett played through broken bones, sprains, pulls, and bruises. Leroy Butler, former starting safety for the Packers, saw Brett roll his ankle in a game against the Minnesota Vikings. He looked at Brett’s ankle and saw the swelling and the multiple colors his ankle had turned. Butler thought there was no way that Brett would be playing in the game the following week. No worries. Brett started the following week and threw for five touchdowns in a win against the Chicago Bears. Leroy said, “Whenever it’s his time to leave this earth, I want to see the X-rays. I don’t believe it. He’s not human. I’m telling you the guy’s a mixture of wolverine, Robocop, and Superman.”

Brett Favre’s physical grit had garnered the respect of players, coaches, and fans. His mental and emotional grit took him to a completely new level. Brett’s father, Irvin Favre, was very close to Brett. “My dad has been to every game from fifth grade, and he coached me in high school,” Brett said. Tragically, his father passed away from a heart attack on Sunday, December 12th, 2003. The Packers were playing on the national stage against the Oakland Raiders for Monday Night Football the following day. Most humans would not be able to muster the courage to play football a day after losing their friend, coach and, most importantly, their father. Brett not only started the following day in honor of his father, but he also inspired his teammates by doing it. Packers wideout Donald Driver told it like it was: “I talked to the receivers before the game and told them ‘Anything he throws, we catch,’” said Driver. “I don’t care what it is — behind us, over our head, if we have to get on a ladder or jump on a guy’s shoulder, we’re going to catch the ball.”

To honor the emotional pain that Brett was enduring that day, the Oakland Raider fans uncharacteristically greeted Brett with cheers and an ovation. Brett had said he was never so nervous before starting a game in his life. That night he threw for 311 yards, and four touchdowns in the first half alone. The Packers went on to win the game 41-7 and Brett played one of his best games ever. “I knew that my dad would have wanted me to play,” Favre said. “I love him so much, and I love this game. It’s meant a great deal to me, to my dad, to my family, and I didn’t expect this kind of performance. But I know he was watching tonight.”

Brett Favre was known as a “Gunslinger” because he would do just about anything to get the win. He had 28 comeback wins in the fourth quarter during his career. “We’re watching for those ‘Did you see that moment,’ and he gave you so many of those where he’s throwing it backwards, under arm, or shot-putting it,” said longtime coach, Steve Mariucci. Because Brett has never been afraid to make mistakes in the pursuit of greatness, he still holds the record for the most career interceptions (336) by an NFL quarterback. Likewise, he also has been sacked more than any other quarterback in league history (525). These sacks were by players who outweighed him by 50-100 pounds and he always got up from those sacks. This was just Brett.

When the game was on the line, Brett Favre was the guy you wanted under center. He never backed down from a challenge. He always stepped up in the face of adversity. Brett didn’t look to have his toughness recognized; it just was. He made the people around him want to play harder. When his teammates saw his determination, they followed suit by giving their best effort.

When Brett retired in 2011, at the age of 41, he held just about every major record for NFL quarterbacks, including most passes attempted and completed, career passing yards, touchdown throws, and most wins by a quarterback. In 2016, he was inducted into the NFL’s Pro Football Hall of Fame. Although Brett Favre’s playing days are over and his records are being broken, his impact on the game will not be forgotten. In the end, it was his physical, emotional, and mental grit that separated him from other players, and other humans for that matter. He played the game the way it was meant to be played.

Brett Favre is one of the 144 “Wednesday Role Models” featured in the Student Athlete Program. This program is designed to improve the character, leadership and sportsmanship of high school athletes. To learn more about this program and how you can implement it in your school: