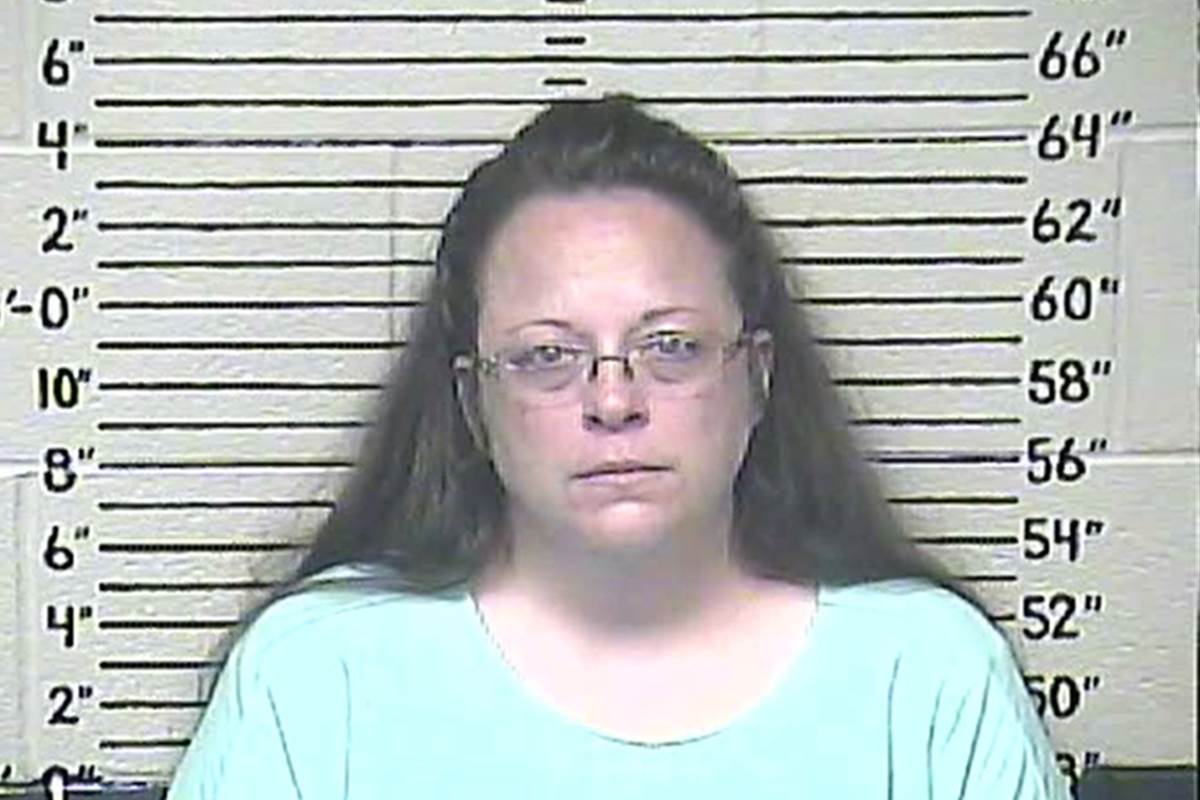 In July of this year, by a 5-4 decision, the Supreme Court ruled that marriage is a civil liberty granted by the Constitution of the United States. This decision essentially ended decades of debate about same-sex marriage in America. The very next day marriage licenses were legally granted by county offices across this nation. Whether you agree or not (most polls show 60% favor while 40% do not favor same-sex marriage), the debate was over. Or so I thought.

In Kentucky, several county clerks, decided to stop giving marriage licenses to any couples. One of those individuals is Kim Davis, County Clerk of Rowan County. She has been on record saying that gay marriage is inconsistent with her Christian beliefs and in good conscious, she cannot grant same-sex couples a marriage license with her signature. In September, Kim Davis was arrested for Contempt of Court and jailed without bond. She has since been released, and her office is issuing licenses without her name and authority. Some say these marriages are legal and will be recognized by the State of Kentucky and and some say they will not.

I went to visit my father-in-law this weekend, and as usual, the topic of politics came up as did this case. I couldn’t believe that there was much to debate, but boy, was I wrong. Here is a bit of the back and forth (picture Archie Bunker and “Meathead” arguing about politics on ‘All in the Family’).

Joe: Did you hear about the county clerk in Kentucky who got arrested for not issuing marriage licenses to same-sex couples? Can you believe that one woman and her personal beliefs can impede the law of the land and the Supreme Court decision on same-sex marriage?  This is the United States, not a Christianity state. We are a country of laws and religion doesn’t trump those laws. Whether she agrees of not, the Supreme Court ruled on this, period, end of story. She needs to do her job without prejudice.

George: Ever hear of the first Amendment to the Constitution, which grants all Americans freedom of religion? And, if her religious beliefs dictate that she can’t authorize same-sex marriages, she shouldn’t be forced to do so. The nation, state or county should provide her with an accommodation and work with her religious beliefs. They do this with captured terrorists in Guantanamo Bay detention camp, so they should grant this to Ms. Davis, an American citizen.

Joe: Civil liberties are pretty important too. She is violating their civil rights to get married. If she doesn’t feel like she can issue a marriage license to gay couples, simply do the honorable thing and resign like others in similar positions.

George: I disagree. These couples can go to the next county and get married. She is not violating anyone’s civil rights. She is merely acting in accordance with her religious beliefs. Furthermore, she is an elected official, elected by the people of Rowan County. She doesn’t have to resign and she cannot be fired for not obeying a law. The President doesn’t obey the immigration laws of this country now, but can you fire him?

Joe: No, but he can resign and he can be impeached.

George: That’s right, and if the good people in Rowan County disagree with her, they can impeach her or the state government can change how they issue marriage licenses in Kentucky.

Joe: So, you’re saying that one elected official can override the Supreme Court of the land. You’re comfortable with that? Are you comfortable with a county clerk who will not authorize marriages from different racial groups based on his/her religious beliefs too?

1) Do you think that a county clerk should be able to ethically put his/her religious beliefs before the law of the land?

2) What do you think Ms. Davis should do in this situation?