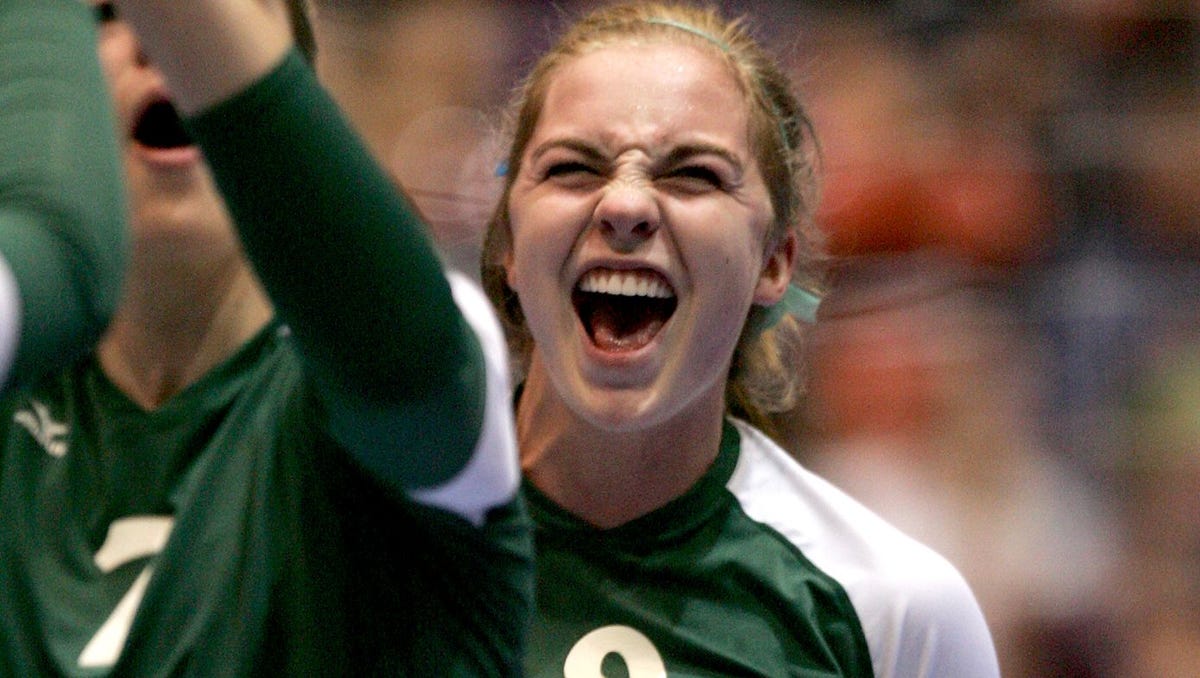 In the fall of 2010, Iowa City West High School women’s volleyball team won its first state title. It was everything the coaches, players, and parents had imagined it would be. The team members (the Ladies of Troy) jumped up and down and screamed with excitement. They raised their championship trophy while crying tears of pure joy. They hugged their beloved Coach, Kathy Bresnahan, who had been trying to win a state championship since she had come to West High School 23 years before.

The linchpin on that championship team was Caroline Found. She always hated the name Caroline because it sounded old-fashioned to her. So she instructed everyone she met to simply call her Line. Line was a junior and all-state setter for West High. For those unfamiliar with volleyball, the setter is like the quarterback on the team. She calls the plays and distributes the ball, whereupon it is strategically spiked over the net. It’s almost impossible for a team to be successful without a quality setter. A key factor in winning their state championship was Line’s excellent job of quickly analyzing the other team’s defense and distributing the ball to her hitters.

However, Line did much more than pass the ball to the right hitters on her team. She also was their emotional leader. She always had a smile on her face and a laugh to offer others. Her enthusiasm was contagious. At the end of each team huddle, this team leader would reward a teammate who worked particularly hard that day by saying something like, “Shelley, love your hustle, West on 11,” (Shelley’s number).  Off the court, Line was the person who orchestrated the goofy teenage dance moves at parties. She also had a reputation for pulling pranks and no one was immune from her antics. Her teammates used the following phrases to describe Line:

“A genuine zest for life,” “a bubbly and infectious personality,” “a caring soul,” and a “heart of gold.” One person wrote, “Ask anyone who met Line and they will tell you that her energy and enthusiasm could power an entire town.”

She also befriended students with special needs at school and often sat with unpopular kids during lunch. “Hi, I’m Caroline and I’d love to be your friend” was commonly overheard at West High School during Line’s tenure. The West High School principal observed “I never saw her have a bad day. She was an indiscriminate hugger.” Indeed. One day, Line spotted her principal down the hall and charged him at full speed, launched herself into his arms, and nearly knocked him over.

However, in April of 2011 Line’s life turned upside down. Her mother, Ellyn, was diagnosed with pancreatic cancer. It was at an advanced stage, and so the prognosis was not good. Since Line’s father Ernie was a physician, he fully understood that Ellyn only had a few months left to live. As spring turned into summer, Line’s mom transitioned into hospice care.

On August 11, Line attended a Young Life Christian meeting and had plans of spending most of the night with her mother at the hospital. To expedite her travels, she borrowed a moped from a friend. Unfortunately, Caroline never made it there. Less than a half mile from her school, on a road that she had traveled thousands of times, Caroline lost control of the borrowed moped and crashed. Police investigators would later conclude that her body catapulted over the handlebars and struck the curb head-first. Caroline was killed instantly. She was just 17.

Four days later, hundreds upon hundreds of Iowans filed through the gymnasium at West High School to offer their condolences. Entire volleyball teams from neighboring towns waited up to four hours in line to say goodbye to this beautiful soul. The next day a funeral was held at St. Andrew Presbyterian Church where Caroline’s number 9 volleyball jersey draped the closed coffin. Coach Bresnahan provided a eulogy that reminded family and friends of the way Line truly lived life to the fullest. Caroline’s mother found the strength to attend the funeral, and with her husband by her side, she was able to walk down the aisle. This would be the last time she ever walked. Seven days later, Caroline’s mother lost her battle with cancer. Within a few short days, Doctor Ernie Found had lost his youngest child and his wife.

As the 2011 volleyball season began in the following days, assistant coach Scott Sanders turned to Coach Bresnahan and asked, “Not that it’s important, but we’re going to be terrible this year, aren’t we?” Bresnahan replied, “Yeah, we are. We’ve lost our setter, our leader, and our identity.” The success of the upcoming season was redefined in the aftermath of this tragedy for the defending state champs. Success was not going to be measured by wins and losses. Getting the kids through the season in one piece would be the main priority. Simply getting through a practice without tears would feel like a victory.

At such a tragic time, the team had to find a new setter and no one wanted to replace their dear friend. It just felt wrong. No one wanted to take Line’s place. Coach Bresnahan finally settled on Kelley Fliehler, Line’s best friend since the age of three. Kelley’s response: “No. Please don’t do this to me!”  However, her teammates gave her the encouragement she needed to hear by saying, “Line would want you to do this.” Within a few days, Kelley committed to trying the new position. Kelley also took over the emotional leadership duties and ran the team huddle. She ended each huddle with, “West on 9,” to keep the memory of Line with the team all year.

As expected, the season got off to a rocky start. Kelley struggled in the setter position and the team just wasn’t clicking. The only constant during that season seemed to be the presence of Ernie Found. He never missed a game. “I did a lot for those players because I felt like it would help them. It did a lot for me too,” said a teary-eyed Dr. Found. “Those were her buddies out there.”

To help the community heal, a West High student named Maddie Vernon came up with an idea for a t-shirt. It was a simple phrase, “Live Like Line,” in white block lettering on a basic blue shirt. Little did Maddie know that this t-shirt would soon be purchased by the thousands. This shirt ignited a spark in the community. Those three simple words quickly became a life philosophy. West High School counselor Amy Kanellis observed:

“It meant we were going to embrace life, smell the roses, look around, and appreciate the people that were walking the halls with us. We were going to live life in a most positive way.”

As many as 600 students attended volleyball games that year. Most were wearing their blue “Live Like Line” shirts. The packed house had acquired an electric atmosphere and, as the season moved along, the Ladies of Troy played better and better. After every victory, the P.A. announcer played a classic song from Neil Diamond entitled “Sweet Caroline.” The team would turn to the crowd and sing: “Sweet Caroline, bum, bum, bum. Good times never seemed so good.” And the crowd would scream back, “So good, so good, so good!” Singing this song made everyone feel like everything was going to be okay. And it was.

The Ladies of Troy went on a winning streak. They were always good enough to beat the weaker teams in the area, but they began to compete against and even beat the ranked teams in the state. The West High Ladies of Troy ended their regular season with 28 wins and only 6 losses. Next, they won their conference championship, thereby earning a spot in the state playoffs. Once in the playoffs, they kept winning — sectionals, regionals, quarterfinals, and semi-finals. Finally, on November 12, 2012, West High School was set to play for the 5A Iowa State Championship.

Ironically, their foe was their crosstown rival, City High School. In volleyball, a match is won when one team wins three out of five sets. In this match, City High School took a decisive 2-0 set lead. The prospects of West High School taking home their second state championship in two years looked bleak. However, in their huddle the Ladies of Troy challenged each other and Coach Bresnahan spoke about her love for the players. Then the Ladies of Troy came out swinging. They won set 3 and set 4. The two teams were tied. In the final 5th set, the winner is determined by the team who first reaches 15 points (and wins by 2). It was a tight set. In fact, the Ladies of Troy found themselves down 15-14 and City High School had the serve. But what would have been the championship point for them went into the net. A few points later, West High School striker Shelly Stumpff nailed the ball over the head of a City High defender and sealed the deal for the Ladies of Troy, 18-16.

“It was almost as if there was divine intervention,” declared Line’s dad. “The outpouring of love and affection and pride was just overwhelming. And, Ellyn and Caroline – you could feel them.” As team captain, Kelly Fliehler, said, “We had to do it for Caroline and honor her the best we could.” The noise level could be measured in decibels and the emotions could be measured in tears. Due to the special circumstances, Iowa officials told Coach Bresnahan that her team could have all the time they needed to enjoy this celebration. So, celebrate is what they did. The team laughed and they cried just as they had the year before. However, this year the coaches, players, and parents used the phrase “I love you” a lot more. The entire team went up into the crowd to hug Line’s dad. Senior Olivia Mekies then grabbed a framed picture of Line and brought it back down to the floor and made sure that Line’s face was included in every team picture. Of course, the celebration ended with a singing of “Sweet Caroline.”

These days you can stream “The Miracle Season,” a movie that pays tribute to this story. Two books have also been written to honor the memory of Caroline Found and the story that unfolded after her untimely death. There are many ways to characterize this story. It’s an emotional story, it’s a sad story and it’s an inspirational story. But more than anything, it’s a love story about a girl with a beautiful soul, the West High School Volleyball team, and the community of Iowa City.

Caroline Found is one of the 144 “Wednesday Role Models” featured in the Student Athlete Program. This program is designed to improve the character, leadership and sportsmanship of high school athletes. To learn more about this program and how you can implement it in your school: