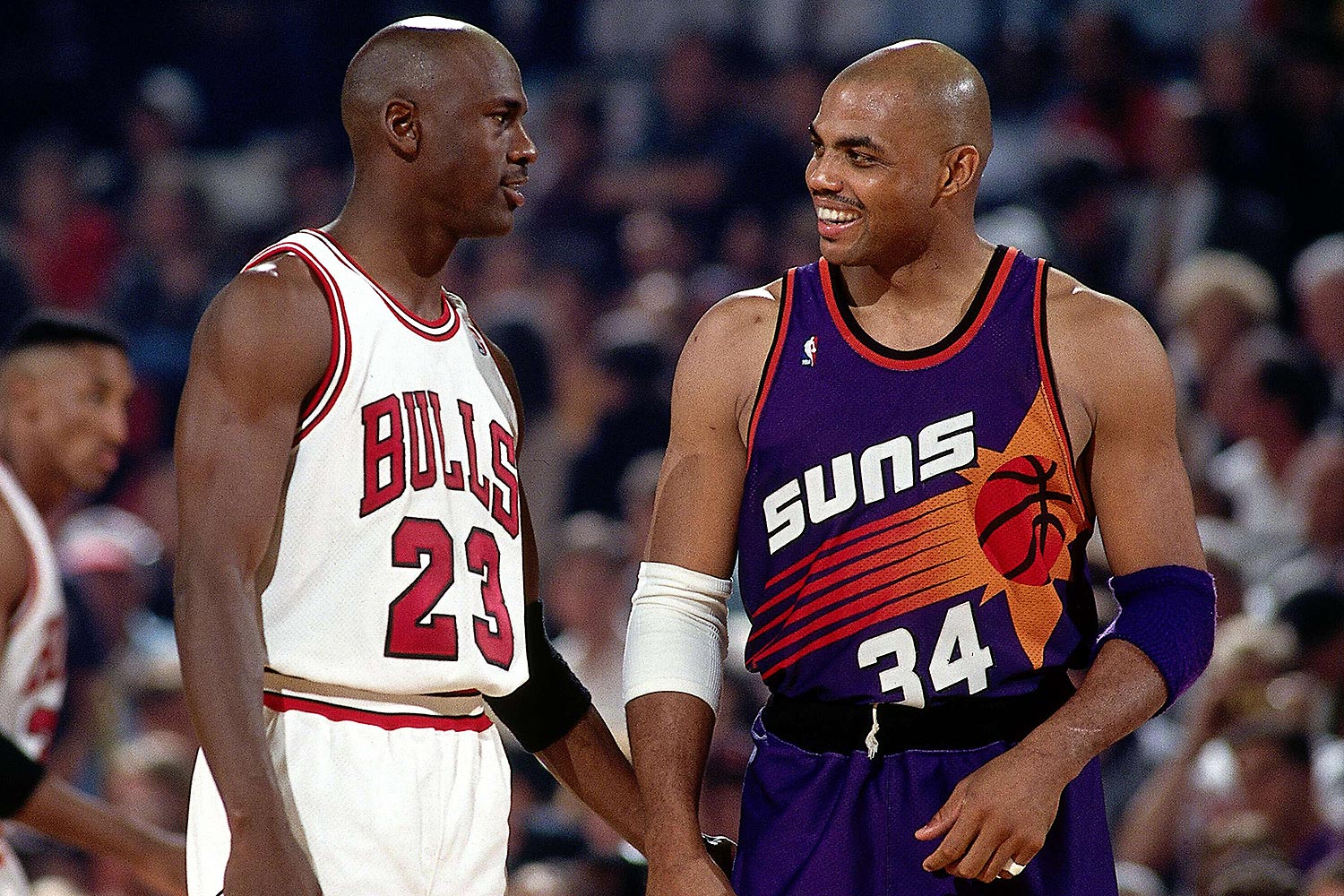 “I don’t create controversies. They’re there long before I open my mouth. I just bring them to your attention.”

Charles Barkley has written three books: Outrageous; I May Be Wrong, But I Doubt It; and Who’s Afraid of a Large Black Man? While he has many nicknames, the ones that have stuck are “Sir Charles” and “The Round Mound of Rebound.” As an NBA superstar, Barkley played 16 years in the league with three different teams. He is one of only six players with 20,000 points, 12,000 rebounds, and 4,000 assists. He was named an 11-time all-star, and he took home the league MVP in 1993. When the NBA named their top 50 Greatest Players in NBA History, Charles Barkley easily made the list.

In 1993, his Phoenix Suns had the best record in the NBA and Sir Charles was named the league MVP. His team was set to play against his good friend, Michael Jordan and the Chicago Bulls, for the championship. Just before the first game, a reporter asked him if “…America is going to love you as much as they love Mike?” Charles responded with his usual candor: “Love me? Oh, I’m their worst nightmare. A brother who won’t be quiet.”

For better or worse, Charles always had something to say —  and he never met a microphone that he didn’t like. Reporters flocked to his locker because he always gave the best interviews: He was entertaining, funny, and provocative. Although most athletes shied away from controversial topics, Barkley confronted them head-on. This man spoke straight from his heart. If he believed it, he would say it. When you do that enough times, you will put your proverbial foot in your mouth. You will make controversial comments. You will make jokes that cross the line. You will say things that rub people the wrong way. Therefore, over the course of his career, Barkley received a lot of hate mail. However, because of his honesty, he also became one of the most beloved sports figures this world has ever embraced.

The story of Charles Barkley begins in the small town of Leeds, Alabama in 1963. Within the first year of his life, his parents separated. Charles never really knew his father as his dad quickly skipped town after the separation. Instead, Charles grew up in the projects on welfare with his mom, grandma, and his two siblings. “I really struggled with not having a father,” Charles acknowledged.

Charles spent a lot of time on the playground, playing basketball late into the night.  However, for much of his childhood, Charles was not tall. As he later described, “I quickly realized, there’s not much use for a fat 5-foot 10-inch point guard.” And so, he was cut from the basketball team during his junior year. The following summer, he grew 6 inches and made varsity. As a senior, Charles understood that he was not the first, second or third option, so he focused his efforts on rebounding. Averaging 18 rebounds a game, he discovered a sure-fire way to get the ball and to gain attention from college coaches.

The next step for Charles was a full-ride scholarship to Auburn University in his home state of Alabama. However, instead of growing up, he grew out. He reported to school at 232 pounds and by the end of his freshman year, he weighed 278 pounds. Despite the excessive weight, Charles excelled on the court. During his junior year, he was named the SEC player of the year and led his team to the NCAA Tournament for the first in school history. He left college early and was drafted as the 5th overall selection in the 1984 draft by the Philadelphia 76ers.

Charles Barkley went on to have a stellar NBA career. He was a dominant force and a legitimate superstar. At 6-feet, 4-inches, he was usually the smallest big man on the court but, as reporter Bill Lyon wrote, “Inch for inch, Barkley is the greatest rebounder ever in the NBA.” Finally, in 1992, Barkley found himself on the legendary US Olympic Dream Team.  Subsequently, both Coach Chuck Daly and his fellow NBA teammates referred to Barkley as the team MVP. “He was definitely our MVP during that Olympic run,” said Magic Johnson. “And still today, you sit here and wonder how a man his size was able to do the things that he did.”

Just remember that Charles was chosen to represent honesty. This is because he gained as much notoriety for his words off the court as for his play on the court. For example, in a Nike commercial, he said, “I am not a role model. Parents should be role models. Just because I dunk a basketball doesn’t mean that I should raise your kids.” This commercial ignited a national debate about the role of athletes and celebrities. On one side, writers like Mike Wilbon said, “Barkley said what everyone should be saying. Don’t wait for a professional athlete to mentor your child because he is a celebrity.” Those on the other side villainized Barkley for this “irresponsible message.” National pundits like Stan Hochman commented, “You can’t not be a role model. There is an obligation for celebrities to be role models and you can’t duck that responsibility.”

Charles quickly learned that, whenever you take a stance on an issue, people will line up around the block to bash you for it. His public comments were costing him many commercial opportunities: He was too controversial; too opinionated for corporate America. Companies wanted a squeaky-clean image and Charles did not fit that mold. Most celebrities will react to this threat of being rejected by toning it down. Instead, Charles doubled down. “He finally decided that he was going to stop worrying what people thought of his comments, his responses to questions,” said reporter Phil Jasner. “Stop thinking about it and say what you feel, say what you believe, and if you have to defend it, defend it.”

Charles criticized. He joked. He lashed out. He spoke on racial issues, political issues, and social issues. When a controversial current event occurred, the media frequently turn to Barkley for his viewpoint. The phrase “no comment” was not in his vocabulary. And, although there was a certain segment of the population that couldn’t accept him, most people came to admire him for his honesty. They found it to be refreshing and authentic.

It can also be said that Charles enjoyed being famous. Instead of grabbing a corner table in the back of the restaurant or hiring a posse to shield him from the public, Charles would belly up to the bar and mingle with the people. This always led to crowds — and sometimes it led to altercations. But he refused to hide from the fans. “I meet 50 people a day, so I’ve probably met a million people. So, a million have been great. Five or six have been really bad. I wouldn’t trade that for the world. I’ve met the greatest people.”

If you think Barkley was opinionated while in the league, imagine what happened when TNT handed him a microphone to host Inside the NBA after he retired from the NBA in 2000. Some two decades later, you still can catch him and Shaquille O’Neil yakking it up in the studio before and after games. Once, in 2016, Barkley criticized his friend, Michael Jordan, and some of the decisions that he made as the owner of the Charlotte Bobcats. Michael apparently took that criticism personally and, to date, the two don’t talk. When asked if he regrets making those comments, Barkley said, “I’m going to be honest and I’m going to be fair. I’ll always love him like a brother, but I’m going to do my job.”

Most recently in 2021, during the Black Lives Matter protests, Barkley again stepped up to the microphone to give his perspective. “I believe most white people and Black people are great people,” said Barkley. “I believe that in my heart, but our system is set up, whether they are republicans or democrats, to make us not like each other, so they can keep their grasp on money and power. They divide and conquer.” Bold statements like this have garnered Charles Barkley much credibility in a divided America.

Perhaps the most interesting part of the story is that Charles doesn’t feel like he is controversial. He has just set out to be himself — an honest guy who offers his candid perspective. He says what other people are too afraid to say, and he gets paid for saying it. If he were a regular guy, his friends would just say that he has “an opinion.” However, since he is famous, people call him “controversial” and “outspoken.”  And, as Charles has pointed out, “I don’t create controversies. They’re there long before I open my mouth. I just bring them to your attention.”

Charles Barkley is one of the 144 “Wednesday Role Models” featured in the Student Athlete Program. This program is designed to improve the character, leadership and sportsmanship of high school athletes. To learn more about this program and how you can implement it in your school: