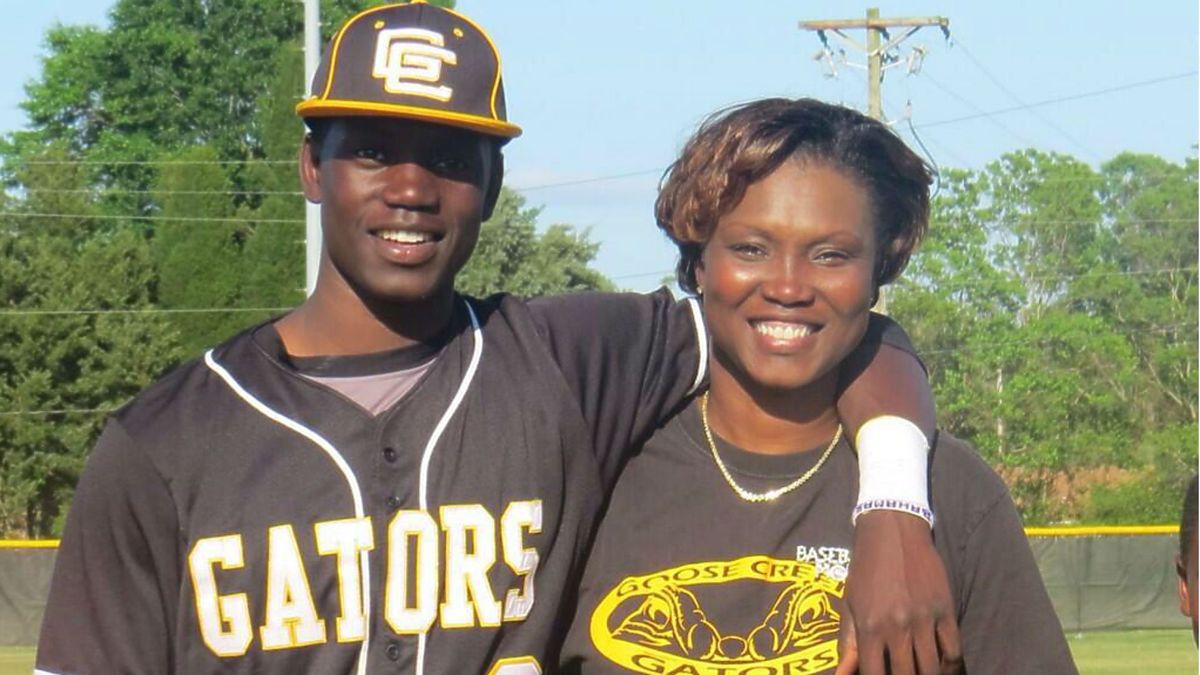 “My mom knew I’d need faith one day when she was gone. She got me ready for this moment. I will be successful because of how she raised me.”

Chris Singleton, an 18-year-old sophomore baseball player at Charleston Southern College, stood on the Collins Park baseball field facing a group of reporters. It was early morning on June 18, 2015, and Chris was about to be thrown headfirst into adulthood. The night before, Chris’ mother Sharonda Coleman-Singleton — an ordained minister, high school speech therapist and track coach — was one of nine people shot dead in cold blood by a hater with a gun. The murderer had calmly walked into a Bible study at Emanuel African Methodist Episcopal Church in downtown Charleston and sat with the group for a while. He then pulled out a gun and shot the attendees, one by one. Obviously Chris’ heart was heavy. Yet he was expected to field questions from media reporters.

Chris did not want to do this. But he knew that he needed to be there at that moment. He needed to speak. The reporters were looking for a story and Chris wanted to make sure they knew who Sharonda was — this woman for whom he held great love and appreciation. He did not want to let her down and he knew it was up to him to share the message she would have shared. It was a message of peace, forgiveness, healing, and love for everyone, including the shooter whose intent upon entering the African American church that fateful evening was to start a race war. Family members and Sharonda’s closest friends felt chills as they listened to Chris. It was as if she were speaking through him. Chris’ appreciation for his mother came out not only through the words he spoke that morning, but through everything he did in the days and months that followed.

Only a day before the heinous crime Chris was living the life of a typical college student-athlete. That afternoon he had been on the very same ball field playing baseball with an under-19 summer league squad. He had been a high school standout in basketball and baseball at Goose Creek where his mother taught and coached. Now there already was talk of a possible major league career. After the game that day, Chris had come home and called his mom who was at the church in the middle of her Wednesday night bible study. As the call ended, he told her he loved her and she said the same to him.

Later that evening Chris received another call coming from his mother’s phone, but this time it wasn’t her on the other end. It was clear right away that something was wrong. “She was very frantic,” said Chris of the unknown caller. “She asked if there were another adult around and I said, ‘No, it’s just me’.” She told Chris something bad had happened and he needed to come to the church right away. Not letting on that anything was wrong, he told his sister Camryn, 15, and brother Caleb, 12, that he needed to go to the church and he would return later.

As Chris jumped into his car and sped toward downtown, his thoughts raced. “I was just hoping and praying that my mom wasn’t severely hurt in any way,” he said. He waited with others in a hotel lobby across from the church. But for hours the only official news he heard was that there had been a fatal shooting inside the church. No one said whether his mother was alive or dead. His girlfriend, Mariana De Andrade, was the first to join him there. She had collected Camryn and Caleb on her way downtown. Hours later the coroner came outside. He asked for the Singleton family. Chris was immediately alarmed, and he told Camryn and Caleb to wait in the hallway. He returned to them after having identified their mother’s body. Chris located a private spot where he told his younger siblings what had happened. He then held them as they wept. On their drive home, Camryn asked if their mom was watching over them and Chris said he was sure of it. He even managed to make them all laugh by saying that dying in a church guaranteed you’d go to heaven. When they got home it was nearly 5 a.m. and everyone collapsed on the couch.

The next morning, when Chris faced all those reporters, he had every right to be angry and to flat-out express it. However, Chris knew his words carried consequences and could either tear apart or bring together his community. Rather than express his anger and resentment, Chris thought of his mother and instead decided to express forgiveness for the shooter up front. He responded to every question that was asked of him by describing something positive about his mom. Chris explained that his mother had taught him that everything happened for a reason. He was going to use what happened here for good. And he did. Chris decided the best way to show appreciation for his mother was to deny the shooter’s wish that a race war would come from his actions. Chris had seen how similar recent events in Ferguson, Missouri, and Baltimore had sparked riots and he did not want that to happen in Charleston. He observed that unity and love were stronger than hate, and the people in the crowd took that to heart. Then, just four days later, thousands of people held hands and marched across the long bridge that spanned the Cooper River from Mount Pleasant to Charleston, South Carolina.

Chris’ mother had taught him and his siblings to step up and be a leader. Their civic duty was to help the public get back on the right path. She walked her talk: When his mother had heard that Chris’ baseball coach had reprimanded her son for not meeting his potential, she went out of her way to thank him: “These boys have too many other boys in their lives. I’m glad I can count on you to be a man. And to help make Chris into one, too.” A year later, after CSU was swept in a series against Longwood and fell well below .500 on the season, Chris called a players-only meeting. He then told his teammates to stop caring for themselves individually and to start thinking about their goals as a team. As you can see, Chris had learned the value of being a stand-up guy, a positive role model, and a team builder.

Another thing that Chris came to appreciate about his mother, especially after her passing, was her dedication to everything she did in life. Therefore he now has dedicated his life to his family. In so doing he has stepped up from being a big brother to Camryn and Caleb and has tried to be their father figure. The two younger siblings eventually moved from living with an aunt to Chris’ college apartment.

During 2017 MLB draft, the Chicago Cubs franchise selected Chris as their 19th round draft pick. Last season was Chris’ first in pro ball and he batted .304 in 12 games with the Cubs’ Arizona rookie league team. He then hit .185 in 27 games with Class A short-season Eugene. “I started off really hot and cooled off a little bit, and when I started getting into the minor league life, it hit me a little bit,” he said. “(But) I battled and played every single day and it was a lot of fun.”

The following year, Chris’ estranged father died after a long bout with alcoholism. Ironically, at about the same time, Chris became a father himself. He and Mariana (now his fiancé) became parents to Chris, Jr.  Thereafter, Chris, Mariana, his newborn son, and his two younger siblings resided together in Charleston. Chris supports the family through his baseball pay, money from his pool cleaning business, and gigs as a motivational speaker.

Although Chris still dreams of being called up to the Majors, he continues to remain grounded in his goals. When his ball playing days are behind him, he says he would like to be a high school athletic director and give back just like his mom did. “I want to have an impact on young athletes the way my mother did,” said Chris, going on to explain how he now lives for her and his family.

Chris Singleton is one of the 144 “Wednesday Role Models” featured in the Student Athlete Program. This program is designed to improve the character, leadership and sportsmanship of high school athletes. To learn more about this program and how you can implement it in your school: