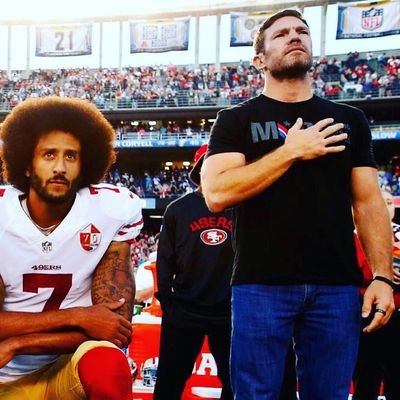 “Believe in something. Even if it means sacrificing everything.”

Colin was born on November 3, 1987, in Milwaukee, Wisconsin. His mother is Caucasian of Italian descent and his father is an unidentified African-American. Because his mother felt it would be too difficult to raise Colin on her own, she put him up for adoption. The Kaepernicks, also Caucasian, decided to adopt Colin after previously losing two young sons to heart defects.

After moving across the country to California at the age of 4, Colin began playing a variety of sports. By the time he was a senior at Pitman High School, Colin was both a straight-A student and an all-state player in football, basketball and baseball. That year he was offered multiple baseball scholarships. But Colin wanted to play football. The University of Nevada was the only school to offer him a football scholarship. Colin accepted it and, by all accounts, he had made the right decision. The trait that separated him from most other quarterbacks was his ability to throw the ball and to run the ball equally well. Doing so, Colin became the only player in NCAA Division I history to amass 10,000 passing yards and 4,000 rushing yards in a career. Moreover, he did all of this while maintaining a perfect 4.0 GPA in business management.

The San Francisco 49ers were impressed with Colin’s intelligence, skill set, and character, and selected him with the 4th pick in the second round of the 2011 draft. Colin bided his time and waited for his opportunity. It came in his second season when starting quarterback Alex Smith went down with a concussion. Colin played so well during that game that the head coach decided to start him for the next game. And the next. And the next. In fact, Colin played so well that he led the 49ers to the Super Bowl, only to lose a nail-biter 34-31 to the Baltimore Ravens. The following season, he led the 49ers to the NFC Championship Game. In 2014, Colin signed a six-year contract worth $126 million and was deemed the franchise quarterback. However, his next several years were filled with injuries and coaching changes. As a result, Colin lost his starting job, regained it, and lost it again several times between 2014-2016.

During this brief career, Colin was continually striving to become a more self-actualized person. He was always trying to figure out who he was and what he believed. As a bi-racial person coming to terms with what it meant to be a Black man in America, he paid close attention to race relations and, in particular, police treatment of black individuals. Colin began commenting on social media about shootings of black men by police. As he did so, he was growing increasingly dismayed by his perception of systemic racism in America. So, as a high-profile athlete, he decided to take a stand — or in this case, a knee.

Before the first pre-season game in 2016, Colin decided to sit during the national anthem. He did the same for the second game. After doing this again before the third game, a reporter spotted this action and broke the story during the post-game media session. “Why are you doing this?” was the first question asked of Colin. He responded, “I am not going to stand up to show pride in a flag for a country that oppresses black people and people of color. To me, this is bigger than football and it would be selfish on my part to look the other way.”

Upon hearing this answer, reporters swarmed to Colin’s locker to ask more questions. He proceeded to answer questions for 18 minutes on this specific topic. Colin spoke calmly, he spoke articulately and he spoke passionately about the wrongs he saw in society.

As you can imagine, these comments drew a tremendous amount of backlash. Sitting during the national anthem was a sacrilege in America. After all, we were all taught to stand and show respect to our country and to the men and women who fought for this country. So the criticism grew. Some criticized him for politicizing sports. Some were angered at Colin for criticizing the very country that afforded him the opportunity to receive his substantial wealth and privilege. Others called Colin a hypocrite for being critical of a problem, but not donating his own money to help. Finally, in a subsequent interview, Colin wore a shirt with communist Cuba’s dictator Fidel Castro on it. Many suggested that if Colin really wanted to understand oppression and inequality, maybe he should (permanently) visit Cuba and see what happens to people who speak out against the government. As a result of his controversial statements, many fans vowed not to attend or watch NFL games, which resulted in an 8% reduction in viewership during the 2016 season.

This was a tumultuous time in American history, and everybody had an opinion on this topic. So, before the next game, Colin sat down with Nate Boyer, an Army green beret soldier who briefly played football in the NFL. Both came to the conversation ready to listen and move the conversation forward. Nate told Colin how his actions were affecting the military and Colin told Nate about the inequities and oppression he saw as a Black man. Nate urged Colin to stand, but Colin wholeheartedly believed he needed to bring public awareness to social inequities. After 90 minutes, they reached a compromise of sorts. Instead of sitting by himself on the bench, Colin would join his teammates and kneel during the national anthem. “I thought kneeling showed reverence in some way, respect in some way,” Nate said. “It felt more proactive.” That night, Nate stood with his hand over his heart right beside a kneeling Colin to show his support for Colin and his right to peacefully protest. “At the end of the day, I’m defending someone I disagree with because I support his rights,” Nate said emphatically. “Those are rights that I have fought for, everyone on this ship fought for – whether we agree with him is not what matters.”

For the remainder of the 2016 season, Colin kneeled during the national anthem. A few other NFL players joined him in his protests. Colin also pledged to donate 41 million to organizations working in oppressed communities, and he did just that. Then, at the end of the 2016 season, the 49er’s head coach was fired and the new coach did not believe Colin fit the new scheme. So the franchise released him. During the offseason, no team would give Colin a tryout to make the team. Because Colin had been a championship caliber quarterback and no team was willing to give him a chance, he believed that he was being “blackballed.” In October of 2017, he filed a grievance against the NFL. He accused them of collusion to keep him out of the league. In 2019, the league paid Colin an undisclosed settlement to settle the case. However, the reality is that Colin Kaepernick never played another down in the NFL after the 2016 season.

This might have been the end of the story, but newly elected President Trump stated that NFL owners should fire any player who did not stand for the national anthem. This did not sit well with the players because they believed that Trump was dismissing the issues and concerns of Black America. So, the following Sunday, over 200 NFL players knelt during the national anthem. As an act of solidarity, the Dallas Cowboys players, including owner Jerry Jones, locked arms, walked to midfield, and they all knelt together before the national anthem was played. Then, in 2020, NFL Commissioner Roger Goodell issued a statement apologizing for not previously listening to the concerns of African-American players.

Although Colin Kaepernick is not credited with starting the organization Black Lives Matter, he added credibility to the movement. And, when George Floyd died after a police officer kept his knee on his neck for 9 minutes, more people began to pay attention. Players in many professional sporting organizations also took a knee in protest. College players and even high school players joined in. Black Lives Matter protests spread across America. What started as one man’s protest had become an American protest. Protests led to conversation. And conversation led to change.

Nike subsequently released an ad that featured Colin with the text, “Believe in something. Even if it means sacrificing everything,” in reference to Kaepernick not playing professional football after his on-the-field protests. Mike Rosenberg of Sports Illustrated wrote, “Mainstream white America is going to reconsider Kaepernick at some point –- the way it reconsidered Muhammad Ali after he refused to go to Vietnam, the way it reconsidered Jackie Robinson and Jack Johnson.” When President Obama was asked to reflect on Kaepernick’s protest, he said:

I believe that us honoring our flag and our anthem is what binds us together as a nation. But I’m also always trying to remind folks that part of what makes this country so special is that we respect people’s rights to have a different opinion and to make different decisions about how they want to express their concerns… The only way that we make it (democracy) work is to see each other, listen to each other, try to be respectful of each other, not just go into separate corners.

The definition of integrity is an internal set of values from which we make most or all of our decisions. Integrity also is about standing up for our convictions, despite the backlash of negative consequences we may face. Colin Kaepernick shows us that this is easier said than done. However, he teaches us that leading a life with integrity is possible. His example of integrity shows us that we can all make a difference in this world, and so can you.

Colin Kaepernick is one of the 144 “Wednesday Role Models” featured in the Student Athlete Program. This program is designed to improve the character, leadership and sportsmanship of high school athletes. To learn more about this program and how you can implement it in your school: