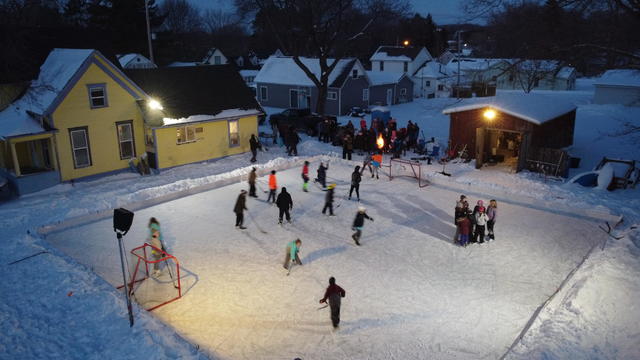 In the sleepy little town of Manton, Michigan, Scott Chittle, watched his two elementary-aged girls settle in for the winter. In-person school was on-again, off-again. Even when it was full time, kids had to sit in assigned seats in class and at lunch, careful not to interact. The local elementary basketball season was cancelled. So, the daughters mainly sat and watched a lot of TV for much of the winter, careful to be socially isolated from their friends.

So, one night, Mr. Chittle, got an idea. He ordered a plastic lining and enough wood to build a 55 x 55 skating rink in his sideyard. Never mind that he didn’t know what he was doing or that his kids didn’t even skate. As he will tell you, he didn’t just do it for his kids. He did it for all the kids in the town who were watching their phones and playing video games all day.

Word spreads in a small town. The local government ordered the fire department to deliver 24,000 gallons of water to the Chittle house. Within 48 hours, the water turned to ice. At first, no one came. But then Mr. Chittle began knocking on doors. Now, it seems every kid in the town shows up on his side lawn every day after school. Neighbors donated money for skates and hot chocolate and hot dogs. The lumber yard donated wood for the daily fire. Mr. Chittle even put up some make-shift lights on poles so kids can skate into the moonlight. And, just like that, one man changed the course of the town’s pandemic winter. In an outdoor setting, kids were being kids again. Fun could be heard again.

“This is amazing. It’s very, very awesome for our community,” said Becky DeYoung, a neighborhood mother of two young boys. “They need this. They need to be outside. They need to be active. But No. 1, I think it’s just the socializing, being able to be social with one another again and giving them a sense of community.” One day a stranger walked by and introduced himself to Mr. Chittle. “I gotta say, you got the coolest yard in the county, and it just melts my heart when I walk by here, because my dad did the same thing when I was a kid.” And with tears in his eyes, he said, “Man, just the memories.”

Joe’s Perspective: This is my childhood 40 years ago. On the bus ride home from school each day, we would vote on the sport we were going to play that day and at whose house we would play. We played all kinds of sports – football, basketball, baseball, kickball, tennis, hockey. We loved it. It was fun, competitive and free. We made our own rules and settled our own disputes. In the winter time, it was usually hockey. This is how I grew up. Although no one made us an ice rink, we would create one on the local pond. Sure, it was bumpy and we had to used hats as hockey goals, but we played for hours – every day.

And, here’s the thing, I tell my kids today. It was fun! We laughed, told stupid jokes and pulled pranks on each other. We did not need an adult to organize our activities. No one told us what game to play that day. No TV, video games, social media or hours sitting around. Our mean parents wouldn’t allow it anyway – they literally pushed us out the door and told us to find something to do. I didn’t know a pudgy kid because we were always active. Although, I can’t prove it, I would be willing to bet that my generation had a lot more fun than your generation. So, my wish is that today, you will find the same childhood joy that my generation found every day.

Your Turn: What do you think of the this story and how much unorganized sports do you get to play as a kid?