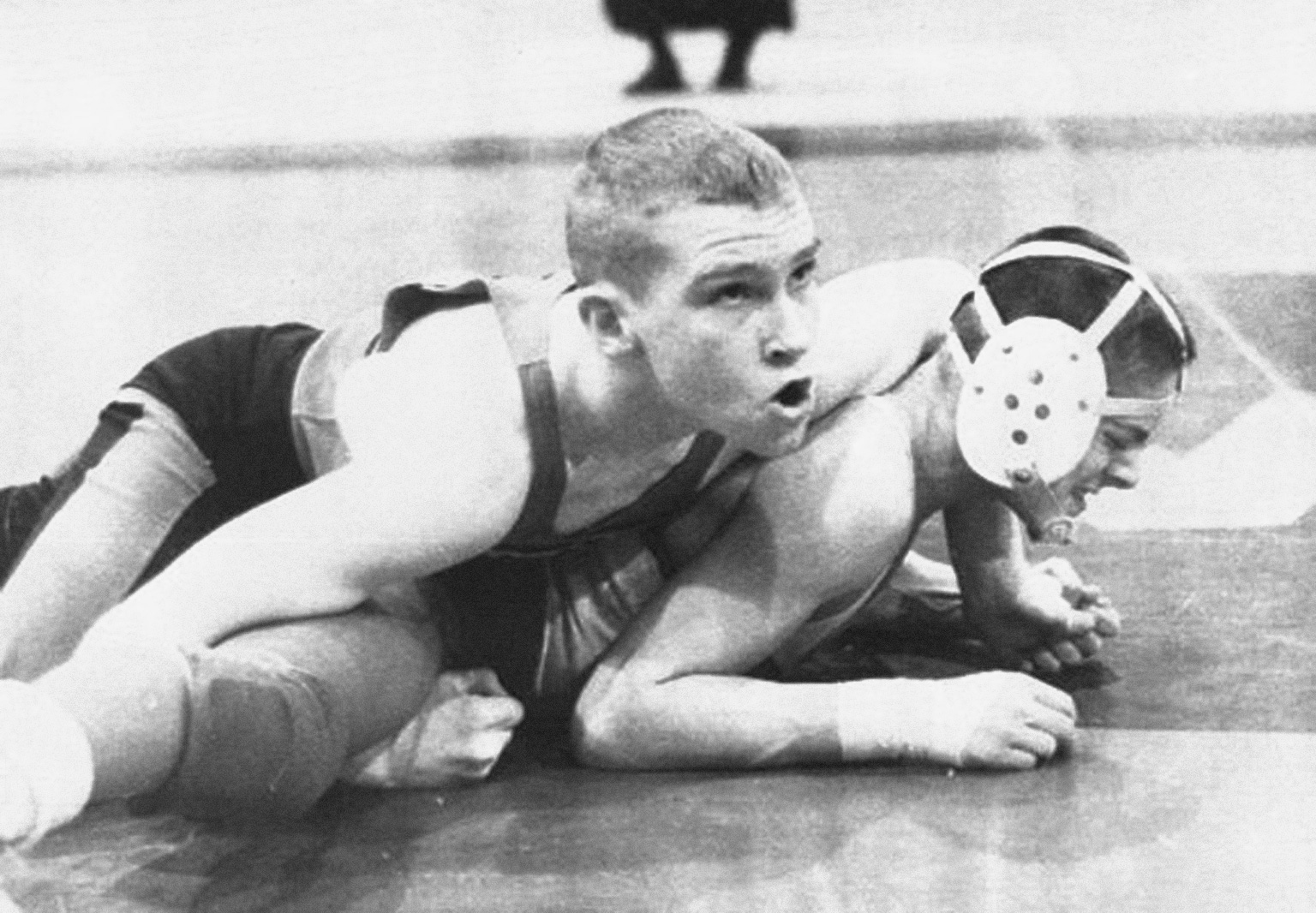 “What Gable understood about wrestling is that it’s the cruelest mistress in the world and that it required all your attention, all your time, all your focus. What Gable did is he was able to concentrate on one area. Wrestling was all he cared about.”

Make no doubt about it, wrestlers are a different breed. They train in hot, smelly gyms day after day, hour after hour. They run the halls of their high schools in goofy-looking plastic sweat suits spitting into cups in order to cut weight prior to meets. They learn wrestling moves like the Cradle, the Half Nelson and the Granby Roll. Then, in three 2-minute periods, they wrestle other wrestlers from opposing schools for the singular goal of determining who is tougher. “The whole idea of the sport is to have one man dominate the other man,” said veteran referee Pascal Perri. “He’s trying to submit you to his physical power.” It takes strength, technique, dedication, and focus to become an elite wrestler.

No one exemplifies what it takes to become an elite wrestler more than Dan Gable. He had the ability to focus better than perhaps anyone in the history of the sport. At Waterloo West High School in Iowa, Gable never lost a match. At Iowa State University, he only lost once. Gable racked up an impressive 181-1 record with three high school state championships and two collegiate national championships (freshmen didn’t compete in those days). After graduation, Gable had a short, yet distinguished career on the international stage. In 1971, he won a world championship. In 1972, Gable won gold in the Munich Olympics as a member of Team USA. Gable did that without any opposing wrestler scoring a single point on him.

“Life according to Dan Gable is a simple process,” said Sports Illustrated columnist Doug Looney. “The basics were hard work, perseverance, dedication, focus.”  When he was a child, Gable’s parents installed a 12 x 12 wrestling mat in his basement. When he entered high school, he successfully begged his wrestling coach for the keys to the weight room. Gable worked out alone at 6 a.m. every day. He essentially sacrificed his social life in order to solely focus on wrestling. When he did go to a movie, he typically left halfway through it. Gable didn’t date because it interfered with his training.

“In college, he literally ran to class every day and he always had ankle weights on his ankles,” recalled ISU teammate, Dave Martin. “He would sit in class and do isometrics during class. He didn’t just do that once. That’s the way he was.”

“I was always the first one in the room, the last one to leave, and the hardest worker in there,” recalled Gable. “When I was on the mat, I always knew I had trained longer, harder, and with more intensity than my opponent. That kind of mental advantage can’t be ignored or discounted.” As an example of his intensity, Gable would routinely challenge any wrestler on his team, regardless of weight class, and spot him 20 points. Gable would then see if he could beat his opponent by the end of the match. And, let’s remember, in Gable’s three years at ISU, his team won the national championship twice and finished second once. That means that his opponents often were all-Americans and national champions.

Gable brought this intensity into the arena too. He was so focused before meets that even his teammates did not talk to him. “I can visualize him walking back and forth with his head down. His eyes would get glassy,” said ISU teammate, Marty Dickey. “You couldn’t even talk to him. In fact, you wouldn’t even try because he wouldn’t answer you.” Then, once the match began, Gable would take it to his opponents. He was relentless, always moving forward, and always attacking. Gable typically would wear down his opponents by scoring numerous takedowns in a match and he won most of his matches by “major decision” or by pinning his opponent. In fact, Gable set an NCAA record with 25 consecutive wins by pin.

It seemed like a foregone conclusion that Gable would win his third straight national championship. Two weeks before the NCAA Championships, ISU honored him with a blanket that included his achievements to date. But an empty space was left at the bottom of that blanket. When he presented Gable with the blanket in front of a crowded auditorium, the university’s athletic director explained that the open space was to make room for the addition of one final crowning achievement. “There’s a place at the bottom where we’d like to place the undefeated national champion…and the outstanding wrestler at the NCAA Tournament.” As you know, nothing is certain in sports. Instead of helping Gable focus, these predictions added undue pressure. So, as fate would have it, the undefeated Gable lost in the finals by a score of 13-11. This was his only loss in both high school and college. Gable was devastated by the loss and the wrestling world was shocked. In fact, even though his team won the national championship that night, no one celebrated.

Gable used this lone defeat to further motivate himself. “I won 181 consecutive high school and college matches before losing to Larry Owings in the 1970 NCAA finals,” Gable acknowledged. “It was after that loss that I got really good.” Because the very next day he began training for the upcoming 1972 Olympics. Those Olympic games would be Gable’s sole focus in life. Accordingly, he trained seven hours a day, seven days a week.

At the time, the Russians were the best in the world. They won the 1971 world championships, but no one on their team could defeat Gable. As the Russians prepared for the Olympics, they put a bullseye on the back of Dan Gable. The Russians publicly stated their goal of scouring their country to find someone who would defeat Gable. Moreover, the Russians simply couldn’t believe that anyone could be that good without performance-enhancing drugs. As such, they insisted that Gable be drug-tested three times prior to the Olympic games. None of this would matter. Gable defeated the Russian wrestler in the finals and won the 1972 gold medal. Following this crowning achievement, he retired from competitive wrestling.

Next, Gable took his aggressive style to the University of Iowa where he became the most successful collegiate wrestling coach of all time. As Gable said, “I attacked coaching with the same ferocity I had as a wrestler.” As a coach, his only focus was to teach his athletes what was required for them to become champions. And they learned. Gable coached at the University of Iowa from 1976 to 1997 and, in those 21 years, his teams compiled a dual meet record of 355-21-5. They won 21 Big 10 championships and 15 NCAA team championships. As an exclamation point to his career, Gable’s last Hawkeye team scored 170 points in the finals, which is still an NCAA record.

Gable’s program reflected his personality. As one high school wrestler recollected, “I was getting recruited and I had five official trips lined up. Iowa was fourth. I canceled the fifth. I knew that was where I wanted to go.” Many of the best wrestlers in the country simply wanted to be around such a renowned competitor. Coach Gable had a hands-on approach. Although he was retired from competitive wrestling, he still faithfully worked out with his teams. Surely these all-Americans did not like getting beat in practice by their coach, so they worked that much harder.

Gable believes that many people fail in life and sports because they want immediate results. He points out that life simply doesn’t work that way. He believes that, instead, positive changes are a product of decision-making and sustained hard work. Gable advocates a 30-day philosophy, saying,

“When you want to make a change in any area of your life, you have to make a decision as to what you are going to do differently in order to make that change. Then you stay on that path for thirty days. Those thirty days then turn into 60 days, and so forth.”

As a result of Dan Gable’s ability to focus, work hard and sacrifice, he has become the most recognizable name in wrestling. He has been inducted into numerous halls of fame and Gannett News Service named him the top wrestler of the twentieth century. However, as Sports Illustrated columnist, Doug Looney once said, “I don’t think Dan Gable physically should have ever accomplished what he did. He made himself into probably the greatest wrestler this country ever had.”

Dan Gable is one of the 144 “Wednesday Role Models” featured in the Student Athlete Program. This program is designed to improve the character, leadership and sportsmanship of high school athletes. To learn more about this program and how you can implement it in your school: