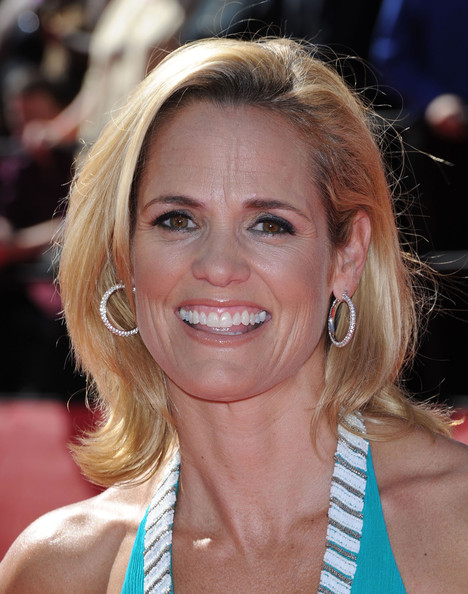 “Never put an age limit on your dreams”

The woman has credentials. She won 12 Olympic medals, including five gold medals. She won her first U.S. championship when she was just 14 years old and broke her first world record at age 15. At the University of Florida, she earned twenty-eight All-American swimming honors – the maximum number possible during a college career. She set three world records and she lowered the American record in her favorite event, the 50-meter freestyle, an astonishing 10 times. Her 12 Olympic medals tie her for the most as a female swimmer. She earned these medals over five Olympic Games, joining the company of just a few athletes to do so in the history of the world.

What truly caught the world’s attention was her comeback in the 2008 Olympics at the age of 41. At the time of her comeback, she was a mother and hadn’t swum competitively in seven years. In a sport where competitors typically retire in their early twenties, Dara Torres was about to show the world what an “older” woman could do. She was going to persevere over Father Time and the best female swimmers in the world.

Torres was always a sprinter. She loved speed.  She excelled at races that were 100-meters or less. Her specialty was the 50-meter freestyle. This swimming race is equivalent to the 100-meter dash in running. It’s all out as fast as you can go – first one to the wall wins. The winner of this event earns the title “World’s Fastest Swimmer”.

Several key ingredients are needed to become the fastest swimmer in the world, and Torres had them all. First, she had a “Type A personality” or, as she put it, a Type A+++ personality. “I’m one of those people who has to do everything I do to the fullest extent of my ability, as fast as I can,” she said. Torres was also ultra-competitive: “I’m pathologically competitive. I hate to lose.” Finally, she loved to exercise, to the point that she felt like a loser if she took a day off.

Torres has retired and returned to the sport she loved several times. She retired after swimming in her second Olympic Games in 1988 at the ripe old age of 21. She made her first comeback in 1992 for the Barcelona Olympics and quickly retired at the age of 25, knowing that she was done for good. After a solid seven-year hiatus, she came back to swim in 2000 for the Sydney Olympics. Of course, her biggest comeback occurred in 2008 as a 41-year-old.

People have asked her the key to a successful comeback. Her response was, “You have to want to keep winning, and to want it badly.  You have to be determined to move closer to reaching your full potential, instead of letting yourself slip farther away.” No matter her age, Torres always had the desire to improve. As she learned over and over again, “The water doesn’t know your age.”

Still, no forty-year-old female swimmer had ever made an Olympic team, let alone won a medal. So, the idea of coming out of retirement as she approached her 39th birthday seemed absurd. When a reporter asked her if he would see her at the 2008 Olympics, Torres responded, “That’s the dumbest thing I’ve ever heard.”  She actually only entered the pool again when she was pregnant because she heard that the buoyancy of the water would relieve the pressure on the belly.

However, once in the pool, Torres’ competitive juices returned. After giving birth to her daughter, Tess, she was asked to participate in some Master’s swim meets for aging former competitors. Not only did Torres beat everyone in her age bracket, but her times were also comparable to the best swimmers in the world. At this point, she began to wonder, “What if?” and “Could I?”

Torres would need every legal advantage to beat the new generation of world-class swimmers. So she quietly put together a winning team. She hired a coach who understood the importance of quality swimming vs. quantity swimming. For the better part of two years, she meticulously took care of herself – ate all the right foods, got 8 hours of sleep each night and did not drink alcohol or caffeine. She also hired specialists to help her with stretching, diet, massage, and weight training.

By the time the Olympic Trials came along, Torres was in the best shape of her life. She believed in herself and she believed that she could still swim fast and, maybe, faster than ever. However, this time she was no longer swimming just for herself. Her dreams had become the shared dreams of the American people and Torres had become one of the media darlings of the 2008 Olympics. For example, Torres was greeted by a 50-foot picture of herself on the Qwest Center in Omaha, Nebraska, at the Olympic  Trials. Torres began to feel a sense of pride that she had never felt before. Her dream had become the people’s dream. She inspired countless others who had been told that they were past their prime, yet still believed that they could achieve something significant. “I just couldn’t let all those people down,” she said. “We were in this together.”

Torres did not disappoint them at the Olympic Trials. She won the 100-meter freestyle, something she had never before accomplished. She then went on to win the 50-meter freestyle, touching the wall in 24.25 seconds. Her time was a new American record and was an astonishing 1.64 seconds faster than she had swum 26 years earlier when she broke the world record as a 15-year-old. Torres was on her way to Beijing to once again represent the United State of America.

Torres anchored both the 4 x 100-meter freestyle relay and the 4 x 100-meter mixed relay in Beijing. She and her relay teams won two silver medals in those events. In both relays, Torres began her leg in second place and could not catch the leaders.  Nevertheless, Torres’ times of 52.4 seconds and 52.27 seconds, respectively, were the first and second fastest splits ever swam by any female athlete in history. In fact, her times were more than a second faster than the individual American record.

The only individual race that Torres chose to swim in her final Olympics was her favorite race – the 50-meter freestyle. She was swimming in lane 4, the lane reserved for the swimmer with the fastest qualifying time. She had a great start, a quick swim and an excellent touch. When she finished, her time was 24.07 seconds, the fastest time she or any other American had ever swum. On the board, however, she also saw devastating news. She had finished second. Britta Steffen, of Germany, swam .01 of a second quicker. Steffen had beaten Torres out of the gold medal by one-hundredth of a second. When asked about her second-place finish right after the event, she said, “I guess I shouldn’t have filed my fingernails last night.”

For Torres, missing Gold by one-hundredth of a second was a difficult pill to swallow. Of that second place finish, she said, “That hundredth of a second doesn’t gnaw at me a little; it gnaws at me a lot.” On the bright side, Dara Torres had just won her 12th Olympic medal, tying her for the most by an American female swimmer. In the process, she had set American records in several events and had swum the fastest times of her life: “I upended the notion that a swimming career must end at age 25 or 35 or even 40 years old,” she said. Torres serves as an inspiration for millions of people around the globe. Her example informs others that, if you have the desire and the work ethic, your dreams are within your reach. She also reminds us all that age is just a number.

Dara Torres is one of the 144 “Wednesday Role Models” featured in the Student Athlete Program. This program is designed to improve the character, leadership and sportsmanship of high school athletes. To learn more about this program and how you can implement it in your school: