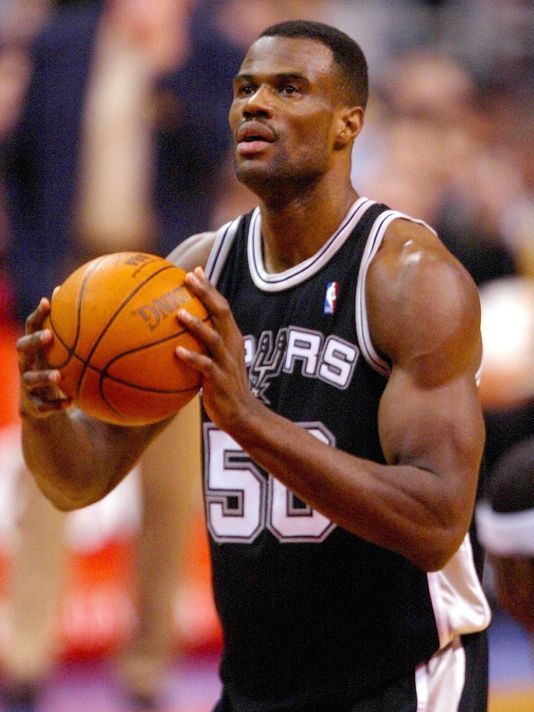 “I am a man first, a husband first, a father first and then someone who just happens to be a pretty good basketball player.”

When he entered high school no one would have guessed that David Robinson would become one of the greatest NBA centers in the history of the game. He measured a mere 5’ 9’’ when he tried out for the basketball team at Osbourn Park High School in Manassas, Virginia. He made the team but subsequently spent more time riding the bench than he did on the basketball court. After the season ended, Robinson gave up the game of basketball. Instead he played baseball, tennis and golf. He also played the piano and he excelled in the classroom.

Still, Robinson just kept growing. By the time, he was a senior, he was 6’ 7’’. The basketball coaches that barely played him as a freshman showed renewed interest. When the varsity coach asked him to try out for the team, Robinson responded, “I’ll try.” So, in his last year of high school, Robinson learned how to play competitive basketball at the center position. Surprisingly, he played well, and earned all-district honors. Nevertheless, despite his new-found physical stature and basketball success, Robinson received very little interest from universities — and zero athletic scholarship offers.

This lack of interest was okay with Robinson. He had his heart set on becoming an engineer. He scored in the top five percent of all seniors in the country when he received a 1320 on his SAT (Scholastic Achievement Test). Based on his grades and this SAT score, Robinson was accepted into the Naval Academy. Subsequently, upon arriving on campus, the coach invited Robinson to join the team. So he did. But basketball played a secondary role to his academics. He acknowledged that, at that time, basketball was just not in his heart. However, nature took its course, and Robinson kept growing. He grew to be 6’ 9’’ during his freshman year, 6’ 11’’ his sophomore year, and reached 7’ 1’’ by the time he was a junior. Robinson became a dominant force in his college basketball career. During his sophomore season, he led the Midshipmen to their first NCAA tournament birth in two decades. During his junior season, he led them to the Great Eight. By the time, he was a senior, Robinson led his team in scoring and rebounds. He then received both the Naismith and the Wooden Awards, which acknowledged him as the most outstanding player in college basketball.

Robinson was projected as the first selection in the 1987 NBA Draft. However, there was a catch. As a graduate of the Naval Academy, he owed the Navy a minimum of two years of service. Undeterred, the San Antonio Spurs selected him with its first pick. So, Robinson served his two years in the Navy as a civil engineer officer at a naval submarine base. When he was honorably discharged from the Navy with the rank of Lieutenant, Junior Grade, Robinson finally joined the Spurs. His teammates tagged him “The Admiral.”

Robinson became a permanent fixture for the Spurs organization for the next fourteen years. He became a 10-time NBA All-Star and won the 1995 league MVP. He is one of four players to ever record a quadruple-double (34 points, 10 rebounds, 10 assists and 10 blocks) in a single game and he is one of six players to score more than 70 points in a single game. Robinson is on a short list of players to ever score 20,000 career points and grab 10,000 career rebounds. Most importantly, he led the Spurs to two NBA Championships, the last of which was his final year as a pro. Robinson walked off the court for the last time as a champion. It was no surprise that the Spurs retired his number and, a few years later, he was inducted into the Naismith Hall of Fame.

Shortly after retiring, Robinson was asked to describe himself. This is what he said, “I am a man first, a husband first, a father first, and then someone who just happens to be a pretty good basketball player.” He is a person who never let fame and athletics define his persona. Robinson was defined by his character. He is a very principled man with deeply rooted values.

Coming into this league, you think that everything is going to be so wonderful. You make a lot of money, you have a lot of time, you have a lot of people telling you how great you are. And it’s not like that at all. I know for myself, I kind of got caught up in the whole game. I thought more of myself than I should have thought of myself. That’s a common trap of fame and fortune. I had to learn to deal with that. Was I going to be this jerk where everything revolves around me or was I going to be a man, a neighbor, a husband?

Robinson openly says that the second most important day of his life was June 8, 1991, the day that he became a “born again Christian”. This perspective informs his views on a variety of subjects. “Life isn’t about putting trophies on your shelf. It’s not about being bigger or badder than the next guy,” exclaimed Robinson. “It’s about trusting that God’s going to use you to do something really special.”

With this as his guiding principle, Robinson was the type of guy who visited hospitals and schools. He donated his time and his good name to numerous causes over the course of his career. He continuously donated 10% of his salary to charity. Most notably, he donated $9 million to start a school for disadvantaged children living in a tough section of South San Antonio. This is one of the largest gifts ever provided by a professional basketball player. After providing this gift, he said: “I like the sense of being a part of being something greater. It’s not about making all the money that you can make. It’s about serving.” Because of his overall character and his service, the NBA named the Community Assist Award after him.

Make no mistake about it. Robinson was an all-time great. The NBA named him one of the top 50 players of the first 50 years of the league. He also won two gold Olympic medals as a member of the US men’s Olympic Basketball team — one in 1992 and again in 1996. These two teams were nicknamed the “Dream Team” and “Dream Team 2” because they were America’s  first Olympics basketball teams that consisted of NBA players.

However, with Robinson, you truly got the sense that his accomplishments off the court mattered more to him. They also seemed to matter to those who knew him best. During Robinson’s NBA retirement party, the Spurs CEO, said the following about Robinson: “Little did we know that you came here to be a basketball player, but you turned out to have such an impact on our lives and so many others.” Maybe the quote from actor Jamie Fox summed it up best when he said to Robinson: “You are legendary. You never got into trouble. And who says the good guy finishes last? This time the good guy is first in our hearts and our minds.”

David Robinson is one of the 144 “Wednesday Role Models” featured in the Student Athlete Program. This program is designed to improve the character, leadership and sportsmanship of high school athletes. To learn more about this program and how you can implement it in your school: