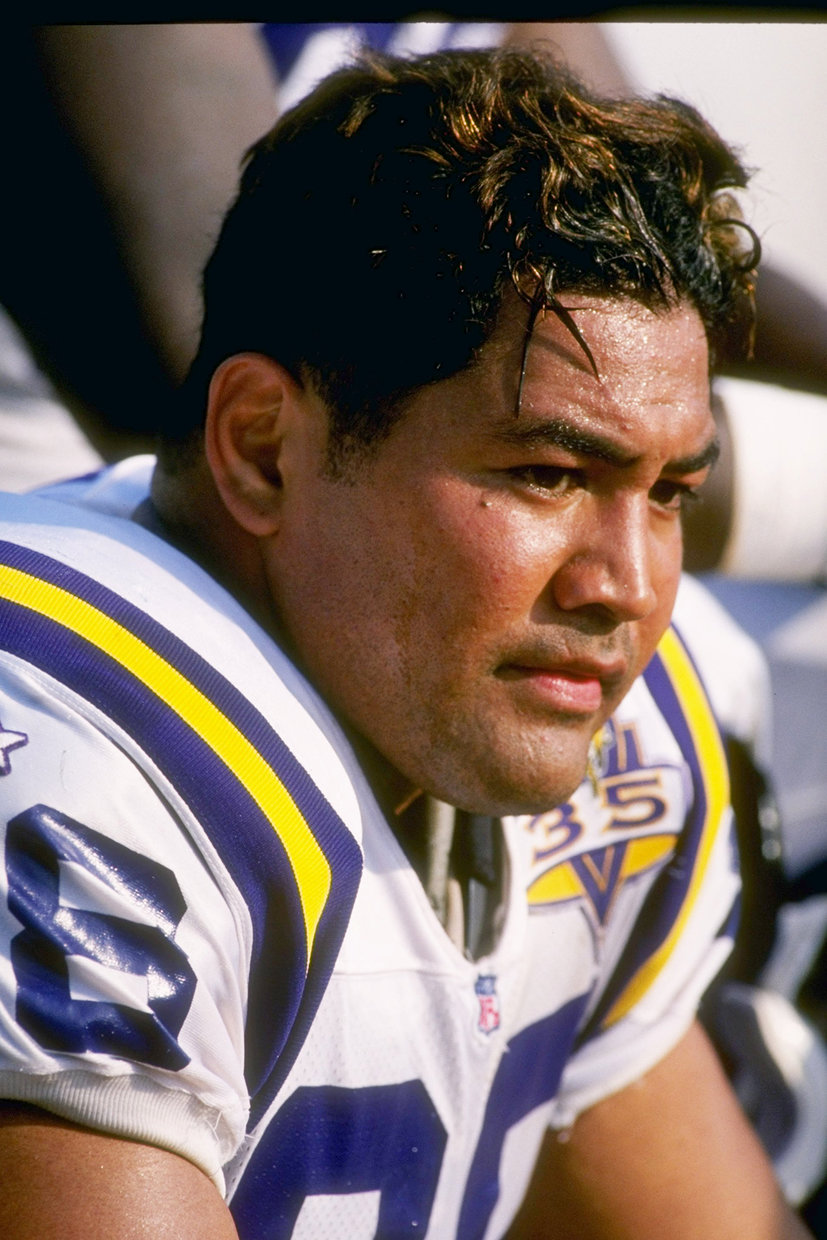 “No one should have to live in that fear. No one should lose everything simply for telling the truth about who they are.”

Esera Tuaolo is a Samoan who was born on the island of Oahu in Hawaii. He is the youngest of 8 siblings. His family was dirt poor — they literally lived in a hut with a dirt floor. Their income came from a small plot of land they leased for banana farming. Esera gained much of his strength from swinging a machete and carrying 50-pound bunches of bananas. It was hard work for a child, but he loved the island life with its beaches, ocean, and sun. Unfortunately, that all ended at age 10 when Esera’s father suddenly died. His mother didn’t feel like she could adequately raise Esera as a single parent, so she sent him to live with family members off the island. He started off living with his brother in the desert in Nevada.

This, of course, was a big shift from the beach scene he loved so much. Furthermore, living with his brother was less than ideal. His brother drank and used drugs. He hit his wife, his kids and, now he also hit Esera. As Esera would later say, “Football saved me.” He was strong, fast, and big, all of which helped him excel on the football field. As time went on, Esera became a star at the high school level and he received many scholarship offers to play collegiate football. He ultimately decided to play at Oregon State University.

Again, Esera excelled. He was a defensive standout on a struggling team that went 11-32-2 in the four years that Esera played. He was named the team’s most valuable defensive player and the most outstanding defensive lineman in the Pac-10. Therefore, despite playing on a lackluster team, Esera’s performance caught the attention of the NFL and he was selected by the Green Bay Packers in the second round of the 1991 draft. Esera then became the first rookie nose-guard in franchise history to start all 16 games. His teammates nicknamed him “Mr. Aloha,” not just because he was from Hawaii, but also because he was fun, engaging, and the life of the party.

Esera went on to play nine seasons in the NFL. His playing weight was 330 pounds and he played nose-guard. This is perhaps the roughest position in football. The nose-guard lines up directly across from the center and is commonly double-teamed to open up the running game. Consequently, Esera’s playing career was shortened from injuries in the trenches. He played for five different teams, and the highlight of his career came when he played in Super Bowl XXXIII.

Shortly after Esera retired, he scheduled an interview with HBO’s Real Sports, a show that highlights human interest stories in athletics. So, what would make Esera so unique that a high-profile show like this would do a feature on him? The answer lies in the first 30 seconds of the interview when reporter Bernie Goldberg asked Esera, “What’s the big secret?” Esera responded with the two words that he had waited to tell the world since he was five. “I’m gay.”

For 32 years, Esera had lived a double life. On the one hand, he was a dominant football player who worked in one of the most macho cultures in the world. On the other hand, he was living his life as a closeted gay man. He was consistently afraid that, if someone knew his secret, his career would come to a screeching halt: “If anyone ever found out, I could lose all of this… It could all just go away in a flash. That paranoia never left me.” Sterling Sharpe, an all-pro NFL receiver, confirmed Esera’s fears later in the same segment when he said, “If the guys found out another player was gay on Monday, he wouldn’t be able to play on Sunday.” Without mincing words, he intimated that the gay player’s own teammates would injure him so badly in practice that he would never play another game in the NFL. The reason? Playing with a gay player would cast doubt on the sexuality of every player on that team. “A gay player would be outcast for life,” stated Sterling. “Question my heart, question my ability, but do not question my machoism.”

This is why Esera was always so careful. From the time that he was in grammar school, Esera knew that he was attracted to males, not females. Growing up in a Pentecostal Church, he listened to plenty of sermons about how homosexuality was a “curse” or a “sin.” So, from an early age, he prayed for this “sickness” to end. When he took up football, he thought that maybe he wasn’t gay. After all, how could a football star be gay? However, he knew that he was gay, and no matter how hard he tried to change it, his sexual orientation remained.

In fact, the main reason that this blue-chip recruit chose a little-known school like Oregon State University was that he wanted to stay out of the spotlight. He wanted to hide out and make sure that his secret remained a secret. At college, Esera hung up a picture of a “beautiful girl from back home” in his dorm room to explain why he did not date women. He even dated several women to retain his cover. He only dated men back in Hawaii who did not know he was a football player. When things got too serious, he broke off the relationship.

Again, Esera always lived in fear. When Esera was drafted by the Green Bay Packers, he was fearful that someone from his other life would “out” him. He took little pleasure in making big-time tackles in games because his face would be displayed on televisions across America. Esera was worried that someone might out him because they recognized him as someone from a gay setting.

“No one should have to live in that fear,” Esera would later write in his book, Alone in the Trenches. “No one should lose everything simply for telling the truth about who they are.”

Whether it be high school, college or at the professional level, football locker rooms are filled with macho talk. Part of that banter is homophobic. Esera has heard it all. “Faggot,” “queer-bait” and gay jokes were just part of the culture. When asked how he dealt with it, Esera said that he bit his lip or simply laughed. Yet inside it was tearing him up. It bothered him immensely that the same teammates who went to battle with him every Sunday undoubtedly hated who Esera truly was as a person. Esera turned to alcohol to numb the pain. He would sometimes drink until he passed out. There were even darker times when he contemplated suicide.

However, on April 4, 1997, — while he still was playing pro ball —Esera met someone who would steal his heart. The man’s name was Mitchell. This man would later become his husband and together, they would adopt twins and raise them in their family. In many realms, this would be a beautiful love story. But in the NFL, it was a secret to be kept at all costs. Esera could never introduce his partner to his teammates. The couple could not be seen together at restaurants or go on double dates with friends. Even when Esera played in the Super Bowl, they had to create an elaborate back story about Mitchell’s fictional role in his life. After the couple adopted the twins, the lies became even more complicated.

It all just became too much. Esera had had enough. He just wanted to be happy and tell his truth. Perhaps the football injuries weren’t the only reason for Esera’s retirement. Maybe it was just time to lead his authentic life and let the chips fall where they may. As he said in that Real Sports interview, “Maybe after this segment, they’ll know me for who I am: a gay NFL — well former NFL — football player.”

After the interview Esera expected the negative attacks to come from everywhere and everyone, but those comments were the exception to the rule. He discovered that most people went out of their way to offer their congratulations and well wishes. Honest conversation ensued with close friends and former teammates. Years later, Esera was asked if he wished he had come out while still in the NFL. He responded, “Yes, knowing what I know now and having received the support that I have from the gay community and the general public, I wish I had.”

To date, no NFL player has acknowledged that he is gay while still a player. Some of the fears that Esera felt in the 1990s still exist today. Esera has acknowledged that several current NFL players have confided their sexuality to him. Nevertheless, each athlete has decided to remain silent. In 2004, the NFL recruited Esera to conduct diversity training in the league. This may have helped to — somewhat — change the NFL culture over time. However, Esera has a much larger mission. He wants to create more diversity and tolerance for the next generation. “I want my children to live in a better world because of me.”

Esera Tuaolo is one of the 144 “Wednesday Role Models” featured in the Student Athlete Program. This program is designed to improve the character, leadership and sportsmanship of high school athletes. To learn more about this program and how you can implement it in your school: