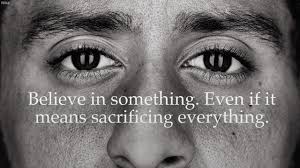 Nike has announced that they will release a new ad featuring Colin Kaepernick, former NFL quarterback. Kaepernick is most known for protesting police brutality and inequality by kneeling during the national anthem before NFL games. This protest sparked a national debate, one that is still raging today.

The new Nike ad says, “Believe in something. Even if it means sacrificing everything.”

Joe’s Perspective: While I refuse to give my opinion on this matter, I will say that Nike appears to have weighed in on this matter. For good or for ill, Nike has sided with the protesters. It will be interesting to see how this one shakes out. Will many Americans protest Nike or demand the ad be pulled? Will it hurt sales or help sales? Is it a bold move or a dumb move? Only time will tell.  It will be fascinating to see how this plays out in the upcoming weeks and months.

Your Turn: What is your opinion of Nike’s new ad? How do you think it will play out in the court of public opinion?