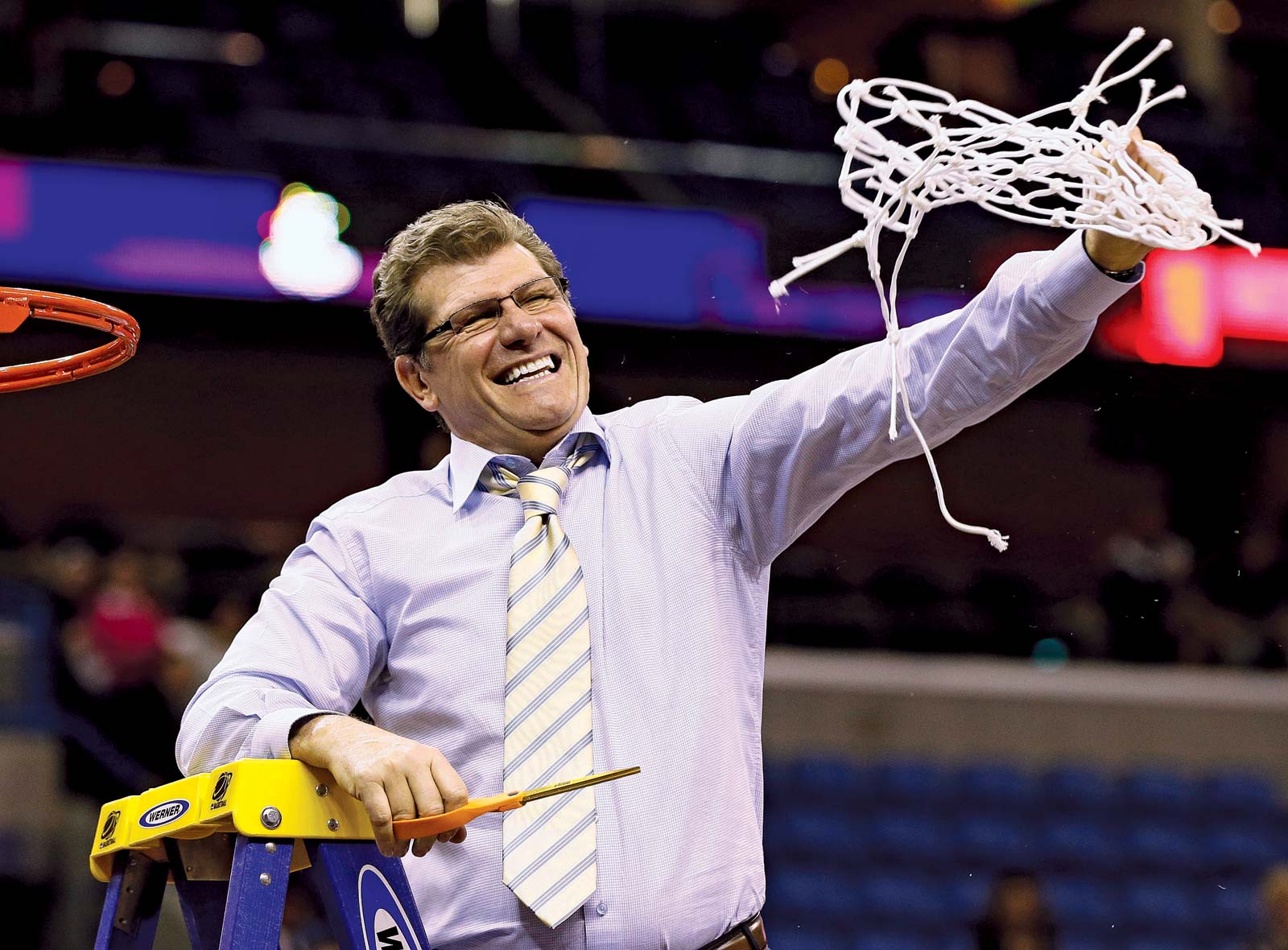 “I think the majority of our success over the years is based on a culture that’s been created and instilled over 29 years.”

Geno Auriemma is the head coach of the women’s basketball team at the University of Connecticut. He has the highest winning percentage of any college coach in any sport: 88.5%. His teams at UConn have won 11 national championships and have appeared in 22 Final Fours. No other men’s and women’s basketball teams has done that well. Coach Auriemma’s teams also hold the longest winning streak of any college basketball program — 111 consecutive wins — and Coach Auriemma has amassed eight Naismith College Coach of the Year awards.

The secret to Coach Auriemma’s success as a coach has been the environment of trust that he has created. He has continually acted in ways that UConn’s players fully believe — correctly — that he wants the best for each of them as individuals and as teammates. Each year, he has driven himself to cultivate a synergistic chemistry of trust based on the unique development of each player, but in a climate of unselfishness and teamwork. Before every game, the University of Connecticut women’s basketball team joins hands in the center of the locker room and yells, “Together!” On more than one occasion, he has had to tell players to “care more about the team’s performance than your own stats.” And the coach’s players absolutely trust in him. Jackie MacMullan is a sports journalist who has covered countless basketball coaches for over 25 years. After carefully researching Coach Auriemma, she said, “I have never-ever encountered a group of athletes who are so fiercely protective of their coach as this one.”

This especially is astounding because Coach Auriemma is extraordinarily tough on his athletes. He sets a standard of excellence and demands his players meet that standard. “I bother my best players,” Coach Auriemma says with pride. “I poke and I prod and I push and I irritate because I want to find out how they are going to react under stress.” While this form of tough love is challenging, the players know that they need this structure. Early on in Coach Auriemma’s coaching career, he took his foot off the gas and the end result was an early exit from the NCAA tournament. At the year-end wrap up, Meghan Pattyson-Culmo told her coach, “I think you were a bit of a wuss this year. I think you need to get back to where you were.” So, Coach Auriemma took that as implied permission to continuously hold his players’ feet to the fire.

Geno learned this form of tough love from his parents. He was born in 1954 in a small town just outside of Naples, Italy. This was less than 10 years after Nazi Germany occupied Italy during World War II, and Italy’s economy still was suffering. So there weren’t a lot of extras in the Auriemma household. The family had no electricity or heat and they did not own a radio, television, or car. Therefore, when Geno was seven years old, his father traveled to America to find work. He settled in Pennsylvania, found work at a factory, and sent for the family.

When he got there, Geno did not speak a word of English. However, even as a young child, Geno challenged himself every day to learn the language and adapt to the American culture. Sports helped him in his acclimation process. He gravitated toward two American sports — baseball and basketball. Then, after high school, Geno played a little ball at Montgomery Community College before graduating from West Chester University. With his brief playing career behind him, Geno turned toward coaching.

In 1978, he could only get jobs coaching women’s basketball. He grew to love these jobs — teaching at high school, then hired as an assistant at several colleges. He was earning his stripes. Seven years later, Geno was invited to interview for the head coaching job at the University of Connecticut. However, the deck was stacked against him. “I was committed to hiring the best woman for the position,” said Pat Meiser, UConn’s Associate Director of Athletics. Without knowing their intentions, Geno laid out his plans for the team if he landed the job. He confidently told the hiring committee that, within 3-4 years, he would turn their women’s basketball program into a top 25 team. The UConn administrators were so impressed with his vision for their program, and his plans for getting it done, they immediately hired this brash young — and male — coach.

Keep in mind, UConn women’s basketball had just one previous winning season in their entire history. They drew less than 50 fans for home games, which mainly included family and friends. Their own college paper didn’t even cover the games. The field house, where the team practiced and played, had a leaky roof. Women’s basketball historically had been an after-thought — until Coach Auriemma turned them into a perennial powerhouse.

Each year the team steadily improved. His first team was the only one to have a losing record in the next 36 years. Then, the following year, the team went 14-13, then 17-11. In his 4th year, as promised, his team was ranked in the top 25 nationally and earned their very first NCAA Tournament bid. In the process, these teams began to take on the fiery personality of their head coach. Geno also was able to hire quality assistant coaches and they in turn brought in better recruits. And so the winning continued. Since 1988, every UConn team has made the NCAA tournament. Twenty-four times he has coached a team to 30+ victories in a season and six times he has enjoyed perfect seasons. In 2009-2010, the average margin of victory for the undefeated Huskies was 35.9 points. Coach Auriemma and famed Coach John Wooden of UCLA are the only coaches in NCAA history to win four straight National Championships.

Due to the success of the UConn Huskies, women’s basketball no longer took a back seat to the men. In fact, in 2017 the women averaged more attendees per game (10,096) than the men (7,829). Moreover, the women brought in more revenue after expenses than did the football team. The fact is, Coach Auriemma has always been willing to “play anybody, anywhere, any time.” When rival schools play at UConn, the dedicated fans fill Gampel Pavilion. On the road, his teams routinely break attendance records at those venues.

In 2018, Geno was asked why he thinks his teams have been so successful. His answer: “I think the majority of our success over the years is based on a culture that’s been created and instilled over 29 years.” It’s a culture that emphasizes accountability, A+ effort, and personal growth. Assistant coach, Shea Ralph said, “You don’t ever see a player come in here and leave the same player. They are always better.”

So, even though Geno is one of the most demanding coaches in the history of the game, he also cares deeply about his people. For example, when rival coach Pat Summitt of the University of Tennessee was diagnosed with Alzheimer’s disease, he wrote a check for $10,000 to her foundation. When Jamelle Elliott, a former player, lost her father, Geno paid for the funeral expenses. When Nykesha Sales tore her Achille’s tendon one point short of the all-time scoring record at UConn, it was Geno who negotiated a special moment at the beginning of the next game to help her score a bucket to break the record.

Based on his stellar reputation, Geno was selected as the head coach of the US Women’s national team from 2009-2016. Under his leadership, these teams won gold medals in the 2012 and 2016 Olympic games. This happened because Geno was able to take the best women basketball players in the world and create UConn’s signature positive culture and climate of trust. As former UConn player and Olympian, Sue Bird once said, “When playing for Coach Auriemma, there is no time for egos.”

Geno now is 67 years old. But he shows no signs of slowing down. Therefore, there is no telling how many more national championships he will win or how many more lives he will change. Coach Geno Auriemma, once a poor Italian immigrant who could not speak English, has developed into the most accomplished college basketball coach of all time, and a major transformer of lives.

Geno Auriemma is one of the 144 “Wednesday Role Models” featured in the Student Athlete Program. This program is designed to improve the character, leadership and sportsmanship of high school athletes. To learn more about this program and how you can implement it in your school: