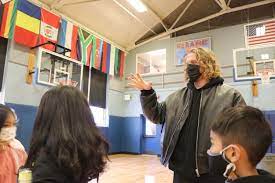 If you haven’t been paying attention, the Omicron strain of the Covid virus is spreading everywhere. Many people are getting this virus, including teachers. So, it was not a surprise when a massive amount of teachers in the St. Louis School District began calling in sick. The district needed substitute teachers in droves. This story became a headline story on the evening news in St. Louis. Most people who were watching, probably commented, “good luck finding subs during a pandemic.”

Harrison Bader is a member of the St. Louis Cardinals. In fact, he won a gold glove last year for his exceptional play in the outfield. In early January, Harrison watched the same story on the evening news. Instead of making the same comments that most people probably did, he decided to help. He volunteered to become a substitute physical education teacher at Meramec Elementary School.

The administration did not tell the children ahead of time. It was just kind of a surprise. The kids were surprised to see a major league baseball player become their teacher for a day. Harrison played with the kids, imparted some life lessons and signed autographs. It was rewarding for him and also for the kids. Pretty cool story.

Your Turn: What lessons can we learn from this story?