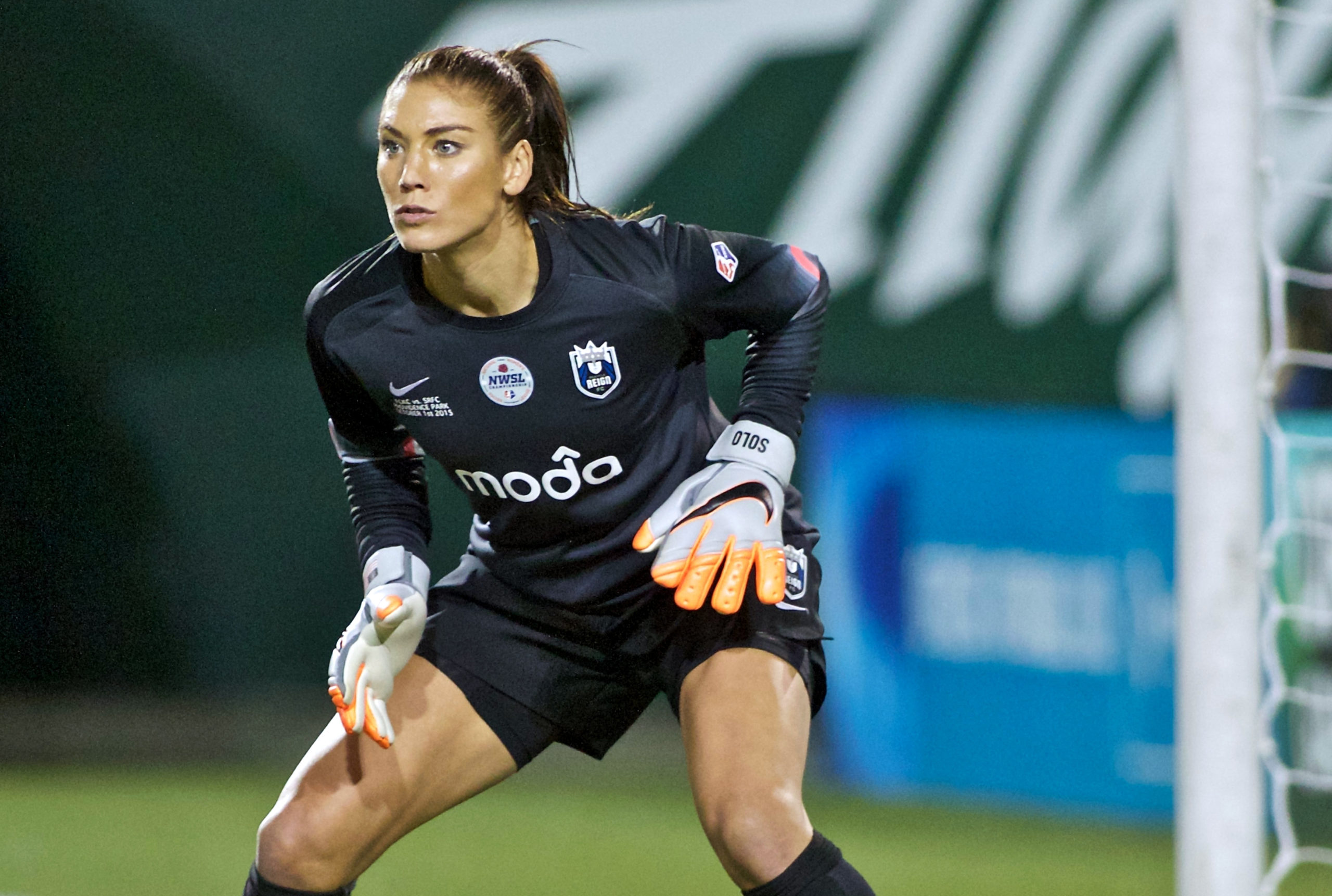 When someone says, “America’s Team,” most people think of the Dallas Cowboys. However, anyone who is paying attention knows that the real America’s Team is the United States Women’s National Soccer Team. Since, 1991, the USWNT has won four out of eight World Cups and four out of six Olympic gold medals. Only once did they finish worse than 3rd place.  Hope Solo was a goalie on this team for 17 years. She was the starting goalie from 2005 to 2016 and she was the one constant on the team: the dependable stopper who kept America in every single game. In so doing she held some impressive USWNT goalkeeping records: 202 appearances, 190 starts, 102 shutouts, 153 wins, and longest undefeated streak (55 games).

“A goalkeeper cannot win a game,” observed Hope “A goalkeeper saves it.” True. Hope never scored a goal in international competition, let alone a game-winner. However, whenever an opposing player breaks through the defense, the lone goalkeeper is the only person standing between the ball and the net. At that point, the other ten teammates can only hold their breath and watch. They wait to see if the goalie — the last possible defender — will save the game or lose it. It’s all on the goalie’s shoulders. Arguably, Hope Solo is the best man or woman to ever play the position. As her longtime US teammate Abby Wambach once proclaimed:

“Hope’s the best goalkeeper in the world. I’d rather have no one else behind me.”

An individual needs a lot of important qualities if she is to become the best goalkeeper in the world. For example, she must be confident enough to fight and scrap for that starting position. She needs to have the toughness to take the heat when she fails. It takes real courage to stand in there against the best scorers in the world. She needs to be a leader as she directs the defense in game situations. And, perhaps, she needs to be a little arrogant and outspoken to pull all of this off. This profile is an excellent portrayal of Hope’s persona.

Hope did not develop her on-the-field personality by accident. Her upbringing had a lot to do with making her who she is as a person and as an athlete. Hope was born in 1981 in the small town of Richland, Washington. She had a chaotic upbringing by anyone’s standards. Her mother and father divorced when she was six years old. Her father spent time in prison and even more time as a homeless person. Her mother was an alcoholic for a good portion of Hope’s childhood and was frequently laid off from her production job at the town factory. As a result, Hope’s family found themselves evicted from their home on more than a few occasions. These experiences taught Hope to be tough, gritty, and accountable to herself.

But, through sports, Hope also learned to be accountable to others. Soccer taught her what it meant to be a good teammate — first as a forward who was responsible for scoring and then as a goalkeeper. Hope led her team to a state championship during her senior year of high school and then accepted a collegiate scholarship to the University of Washington. It was there that Hope established herself as one of the best goalkeepers in the game.

In 2000, Hope was invited to join the United States Women’s National Team. She spent much of her early time either as an alternate or as a backup to Briana Scurry, a famous goal keeper. Nevertheless, Hope kept fighting and scrapping to become the best that she could be  and, in 2005, she won the starting role and started making history.

The career of any goal keeper is filled with highs and lows. It just goes with the territory. Hope anchored the gold medal victories in the 2008 and 2012 Summer Olympic Games. She also played every minute of the victorious 2015 World Cup, allowing just three goals during the entire tournament. She has made diving stops that allowed her team to win overtime shootouts. She has stopped last second chances in the final seconds to secure 1-point victories. At the same time, Hope has made unforced errors at inopportune times. On several occasions, she gave up two goals in the opening minutes of a World Cup game. She once allowed a ball to slip through her legs for a game-winning goal. In the 2011 World Cup final, her team lost in a penalty shootout to Japan after she allowed the tying goal in the final minutes. As the goalie, you have to be accountable for it all.

If should be noted that Hope Solo is no model Girl Scout. She has had her share of controversies. These frequently involved her tendency to boldly make controversial statements. For example, in the 2007 World Cup Games, the undefeated Americans cruised into the semifinal match against Brazil. Leading up to this match Hope had participated in two shutouts while giving up only two goals overall. Nevertheless, the US coach replaced Hope with her backup, Briana Scurry, who hadn’t played a game in three months. The result was a 4-0 loss to Brazil. In a post-game interview, Hope said: “It was the wrong decision, and I think anybody that knows anything about the game knows that. There’s no doubt in my mind I would have made those saves.” This statement earned her a serious suspension and she almost missed the 2008 Summer Olympics. Fortunately for her, the head coach was replaced. Again, in 2016, Hope was terminated from the USWNT after she called the Swedish team a “bunch of cowards” after a tough loss in the Olympics.

Hope’s unrestrained speech has led to other controversies and suspensions and she no longer is actively playing professional soccer. She freely admits that there are some words that she would like to take back. However, Hope firmly believes that her outspoken nature has made her the person that she is today. “I’m very proud of being outspoken because you can’t make changes in the world unless you speak up.” And Hope very much wants to be a change agent for women in professional sports.

Hope may no longer be playing professional soccer, but she feels accountable to the other women playing on the USWNT and to those juniors who have yet to arrive on the national scene. Accordingly, she has become a thorn in the side of the United State Soccer Federation for her crusade for the USNWT to receive equal pay with the US men’s team. Hope points out that the members of the USWNT win more games, and consequently play more games, than do their male counterparts. Moreover, in 2017 the USWNT netted $5 million in ticket sales whereas the USMNT lost over $1 million. Nevertheless, despite their superior financial success at the box office and on television, the women have been paid substantially less than the men. Due to these inconsistencies, Hope filed a gender discrimination lawsuit titled, “Hope Solo vs. The United States Soccer Federation.” In 2022, the two sides compromised on a $22 million settlement going to previous USNWT players and equal pay contracts for the women’s and men’s teams going forward.

So, what will be the eventual legacy of this tough, dependable, courageous, and outspoken woman? Hope was asked this very question in a 60 Minutes interview. These are her words from that interview:

Hope Solo is one of the 144 “Wednesday Role Models” featured in the Student Athlete Program. This program is designed to improve the character, leadership and sportsmanship of high school athletes. To learn more about this program and how you can implement it in your school: