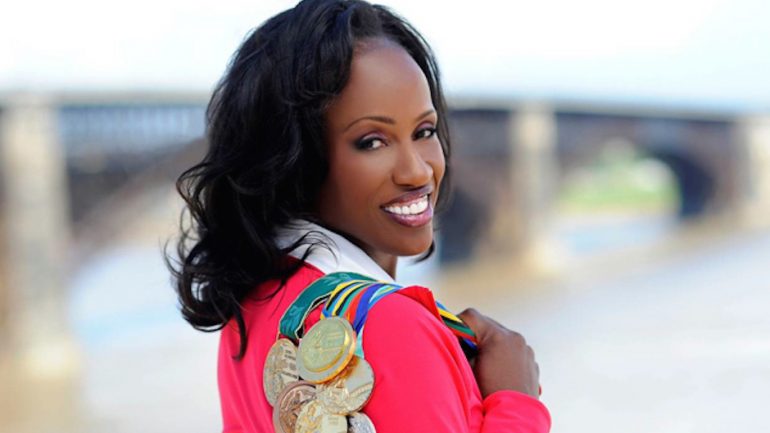 “There has been within me a driving force to be the best I could be – to run faster, jump higher, leap farther –  for as long as I can remember.”

In the 1960s, East St. Louis was one of the most economically depressed cities in America. On one of the most dangerous blocks in that city, 14-year-old Alfred Joyner and 16-year-old Mary Ruther Gaines eloped. Nine months later, Al Joyner was born. Two years after that his kid sister, Jackie Joyner, entered the world. As Jackie later observed, “They (her parents) were just babies having babies.”

To say that Jackie grew up under challenging circumstances would be a huge understatement. Her family was desperately poor. Neither of her parents had graduated from high school. Therefore, they had to take what work they could get. When work was available, the family ate pork chops. When work was limited, they ate spam. When work was not available, they ate mayonnaise sandwiches. Sports journalist Sonja Steptoe once referred to Jackie’s neighborhood as “the worst of the worst when it comes to ghettos.” Within a block of her house she could routinely find “assorted winos, pimps, gangsters, ex-cons, and hustlers.” Drug deals sometimes went bad and violence was an accepted part of the street culture. Numerous family friends were gunned down in the neighborhood. In fact, as a young child Jackie not only witnessed a neighbor get repeatedly shot, but also her 50-year-old grandmother was murdered in her sleep by her boyfriend.

Fortunately, when Jackie was ten, she signed up for AAU track and field at the local community center. They had a non-regulation oval track that measured 550 yards. Jackie tried lots of different events, but she wasn’t very good. “I finished last or nearly last in every race that summer,” she recalled.  The following year, she met Coach Nino Fennoy and he served as a positive male role model in Jackie’s life. He inspired Jackie to make the most of her talent and taught her to avoid the pitfalls that befell most of the other children in her neighborhood. And, knowing that Jackie could not afford her own, he bought Jackie her first pair of track shoes.

Jackie’s life revolved around sports. During high school, Jackie became a track star and a basketball star. When she had weaknesses, she worked hard to turn them into strengths. “There has been within me a driving force to be the best I could be, to run faster, jump higher, leap farther for as long as I can remember,” recalled Jackie. Her desire and hard work paid off. Her track teams at East St. Louis High School not only won three consecutive state titles but Jackie also led her basketball team to a state championship in her senior year. And, because of  this hard work, Jackie was offered several full-ride scholarships from prominent schools across the country.

Jackie chose UCLA because they were willing to let her play both basketball and run track. During her freshman year, she was the starting forward on the basketball team. However, halfway through that basketball season the unthinkable happened. Jackie’s mother suddenly died from meningitis. This loss shook Jackie to the core. She was isolated, depressed, and lost. Her mood was not helped when track season followed in the spring. At a time when she could have used intense support, Jackie instead was assigned a standoffish coach. He typically began practice by asking Jackie what she wanted to work on. She frequently responded “Nothing.” Then he’d say, “Okay, see you tomorrow.”

His indifference to her training was no small matter. Jackie’s specialization was the heptathlon. This is a grueling women’s track event that requires athletes to compete in seven events over the course of two days: 100-meter hurdles, high jump, shot put, 200-meter dash, long jump, javelin throw, and 800-meter run. Despite her inner struggles that spring, Jackie qualified for the national championship meet in this arduous event. However, with little explanation, that same coach refused to accompany Jackie to the event. That did it: Jackie packed her bags. She told her roommate that she was giving up track altogether and that she would not be returning to UCLA the following year. In that pivotal moment, the individual who one day would be voted as the “Greatest Female Athlete of the Twentieth Century” by ESPN — almost quit.

However, when a young assistant coach (and her future husband!) named Bobby Kersee learned that no coach was going to accompany Jackie to the national meet, he went into a tirade: “You mean to tell me your coach isn’t going with you? That’s outrageous.” He immediately went to the athletic director to complain and requested that he accompany the talented freshmen to the championship meet. A relieved Jackie said to herself, “At last, someone is in my corner.” At the meet, Coach Kersee helped Jackie find her confidence again and she finished 3rd in the heptathlon at the collegiate national championships. A few short months later, Jackie finished 2nd at the US Championships.

Coach Kersee received permission to become Jackie’s full-time coach at UCLA. He was a fiery coach who provided structure and enthusiasm. He looked her in the eye and told her, “I’ve never seen an athlete as gifted as you.” That statement was enough to turn the tide for Jackie. She went to work and dedicated herself to becoming the best. During her final three years at UCLA, Jackie won the NCAA championship in the heptathlon, setting NCAA records each year. She also became one of the best long jumpers in the world. Keep in mind, Jackie was also the starting forward for the UCLA basketball team, scoring 1,167 points in her collegiate career.

A little-known part of Jackie’s story has been her struggle with asthma during her career. Sports historian Sonja Steptoe points out: “The other wondrous thing about Jackie’s achievements is that they’ve all taken place with this specter of near-death asthma experiences.” Coach Kersee agrees. “She always tried to fight asthma and conquer it, instead of control it. She didn’t realize that it could kill her.” While the asthma attacks didn’t kill her, they did make it more difficult to compete at the highest level.

In 1984, Jackie took a year off from her studies at UCLA to train for the upcoming Olympics. She trained from 8 a.m. to 8 p.m. six days a week. Jackie won the Olympic Trials in the heptathlon and was favored to win gold. However, hampered by a hamstring injury and self-doubt, she finished with the silver, a microscopic 5 points away from gold. It was a difficult lesson to swallow. “After crossing the finish line, she realized that she beat herself up mentally,” stated Coach Kersee. “She told herself that she will never do that to herself again.” She was physically tough, but she needed to learn mental toughness.

And she did. From 1985 to 1995, Jackie never lost this event. In this span she won two Olympic gold medals in the heptathlon and she also earned one gold medal and two bronze medals for her efforts in the long jump. She added multiple national and world championships along the way. In fact, Jackie has the top six heptathlon performances of all time, including her world record point total of 7,291 points. “People say she is the greatest female athlete of all time. I have a problem with that,” said track star, Gail Devers. “Jackie is the greatest athlete in the world.” Jackie has won just about every possible award devoted to amateur athletes. However, the greatest honor came two decades after she retired, when the USA Track & Field organization renamed its Women’s Athlete of the Year award “The Jackie Joyner-Kersee Award.”

Jackie retired as an athlete after the 1996 Olympic games. However, she did not retire from being a humanitarian. When visiting her hometown of East St. Louis, she realized that the community center where she received her start in basketball and track was now closed. This meant that youngsters from her old neighborhood were not receiving the same opportunities she once received. In response to that awareness, she started the Jackie Joyner-Kersee Foundation to ensure those marginalized children received the opportunities that she did. Nowadays, she dedicates her time, money and focus toward motivating a generation to believe in themselves and build stronger communities. Knowing her strong work ethic and determination, Jackie will undoubtedly help many kids meet their potential.

Jackie Joyner Kersee is one of the 144 “Wednesday Role Models” featured in the Student Athlete Program. This program is designed to improve the character, leadership and sportsmanship of high school athletes. To learn more about this program and how you can implement it in your school: