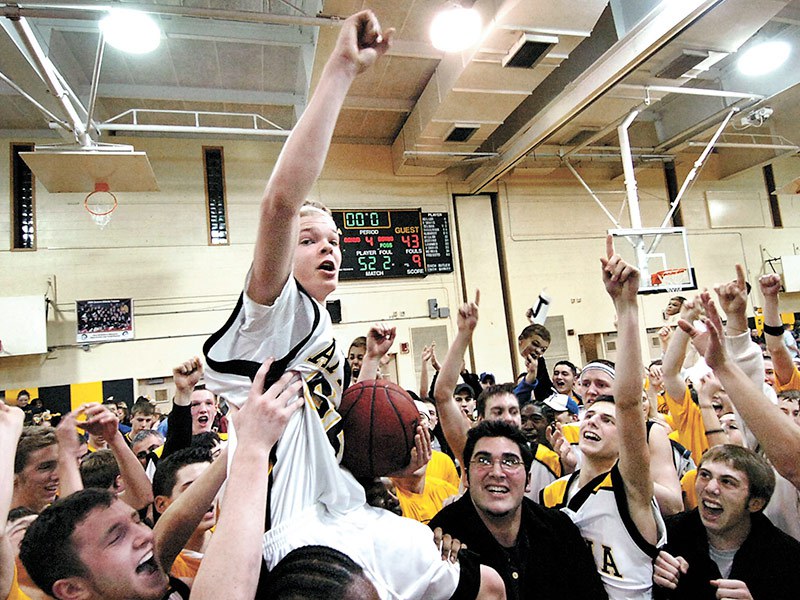 “He was Rudy and Rocky and Rain Man and the Little Engine that Could all rolled into one.”

Jason McElwain was born on October 1, 1987. His parents, David and Debbie McElwain, welcomed him with open arms. They thought he would be the perfect playing companion for his older brother, Josh. However, it didn’t turn out that way. Jason struggled during infancy and as a toddler. He was unable to maintain eye contact and often stared blankly into space. His whole body tensed up when someone tried to hold him. He refused to eat unless he was forced to do so by a parent. He had sudden and violent outbursts and he often exerted rhythmic rocking behavior.  Jason didn’t utter even one word until he was 5 years old. He spent much of his childhood banging together two packs of chewing gum underneath the dining room table

Any mental health expert could tell you that Jason’s behaviors were classic signs of autism. Autism is a pervasive developmental disorder. It affects one in 68 children.  Sure enough, at two-and-a-half, Jason was diagnosed with severe autism.  His parents were dismayed and wondered if they would ever reach him. During his early education, Jason bounced from one special-needs school to the next. His parents were looking for the right fit and the right teacher-to-child ratio. Jason later found a home at Grace Athena Middle School and then Grace Athena High School, but remained in special-education classes.

Two things changed Jason’s life. The first was his relationship with his older brother, Josh. They bonded. Josh helped Jason understand appropriate behavior and he set a positive example. They played sports together and joked around. The other thing that changed Jason’s life was basketball. Autistic kids tend to have obsessions and Jason’s was clearly basketball. He loved to watch basketball and he loved to play it. He practiced all the time.  By the time Jason entered middle school, his autism was no longer considered severe. It was downgraded to “mild” and Jason attributed this to basketball. “I think this helped with my autism, being involved in sports and being more social,” Jason later said.

Jason didn’t make the freshmen basketball team or the J.V. team in his sophomore year. However, the J.V. coach recognized Jason’s love for the game and wanted to reward Jason by making him the team manager. As team manager, his main job was to be a supportive teammate. Jason’s attitude never wavered. Without any fanfare, Jason attended every practice and every game. He encouraged those around him and urged them to be focused on each upcoming game. Jason humbly did the dirty work too. This included getting water and towels for players during the game, mopping up sweat and blood, rebounding for other players during pre-game warmups, and setting up drills during practice.

Being a team manager allowed Jason to spend a lot of time in the gym. He was close to the game he loved. More than anything else, Jason could be “one of the guys.” His whole life, Jason just wanted to fit in. It was difficult being in special education. “Regular kids” sometimes teased him. Jason could list several occasions when he was stuffed in a locker or left in a bleacher. Basketball helped him find his way.

Despite spending countless hours on his game, Jason did not make the varsity team during his junior or senior year. Once again, Coach Jim Johnson asked Jason to be the team manager, this time for the varsity team. And, once again, Jason excelled at the job.  He brought the same level of dedication and enthusiasm to the varsity team. You could always spot Jason on the sideline in his dress shirt and tie and doing whatever was asked of him. Because of his enthusiasm and positive attitude, Coach Johnson gave him the nickname, “J-Mac.” It stuck. No one worked harder or cared more than J-Mac.

At the beginning of his senior year, Coach Johnson told Jason that he would find him a jersey to wear during “senior night.” Senior night is typically the last home game of the year.  Coach Johnson also told Jason that, if the team had a comfortable lead, he would allow Jason to play a few minutes at the end of the game. Coach Johnson figured this was a fitting tribute to the energetic kid who gave so much of himself over the past four years.

True to his word, on February 15, 2006, Coach Johnson provided Jason with jersey number 52 to wear during the game instead of his usual dress shirt and tie. Jason’s name was called over the public-address system before the game. He high-fived his teammates, shook the hand of his coach, gave his mom flowers at half-court, and posed for pictures with his parents. This was truly a special night. Jason was one of the guys.

Jason’s high school team, Grace Athena, was playing cross-town rivals Spencerport for a chance to win the league championship. With Jason cheering for his players from the bench, Grace Athena built a sizable 50-24 lead by the end of the 3rd quarter. The gymnasium was packed with fans. Hundreds of those fans were Grace Athena students. They were chanting, “J-Mac,” clap clap, “J-Mac.” Everyone wanted to see Jason get in the game. They wanted to see him get a chance to score just one point.

With 4:19 left in the game, Coach Johnson turned to the bench and said, “Jason, you’re in.” Jason sprung to his feet and checked in at the scorer’s table. The crowd went wild. Almost everyone was standing. The student section was jumping with excitement. Unbeknownst to Jason, one of the parents worked for Kodak and printed pictures of Jason and put them on sticks. When Jason stepped on the floor, hundreds of students held these pictures in the air. Jason never felt so good in his life.

Jason’s teammates immediately ran a play to get him open. Jason didn’t need to be told what to do. He instinctively shot the ball, only to see it miss everything. It was an airball. The second time down the court, Jason missed a short hook shot. You could hear the collective groans from the stands after each miss. Time was winding down. With 3:09 left on the clock, Jason took a 3-pointer. This time it went in. According to Jason, “the crowd went nuts. It’s like I’d won the Super Bowl and the lottery and the slam dunk competition all at once.” As far as Jason was concerned, his whole season, his whole high school career was now complete.

Despite all the enthusiasm, no one in the gym would have predicted what happened next.  As Coach Johnson later said — and Jason has recounted hundreds of times since then — J-Mac got as “hot as a pistol.” He had one foot on the left-wing 3-point line when his next shot swished. Next time down the court he drained a three from the top of the key. On the next possession, a teammate found him in the right corner for another three. Then another three from the right-wing. Next, Jason stood right in front of his team’s bench – the same bench from which he normally cheered his teammates – and drained yet another three. Then, with the game winding down, Jason could hear the crowd counting down the time, “10…9…8…7…” He prepared to shoot the ball from downtown and it swooshed.  In a little over 3 minutes, Jason scored twenty points. He was the game’s high scorer.

Bedlam is the best word to describe the crowd’s reaction after the game. Adults and students alike rushed the court. In an instant, Jason found himself on the shoulders of several students. Jason had this to say of that moment: “This is what happens when you’re a regular kid and you hit the game-winning shot or make the play of the game. This is what happens when you’re just like everybody else.” Many of the coaches and parents were crying, including Jason’s mom. “You can’t imagine what it’s like to be the mother of a child who was diagnosed as severely autistic as a toddler…” Debbie McElwain said. “And then to have the one great moment where we could all just close our eyes and think he was like everyone else.”

To say that Jason’s life soon changed would be an understatement. The first couple of days following the game, he was treated differently at school. Pretty girls waved and said hello. Teachers shook his hand. Everyone wanted to pat him on the back or give him a high five. Jason smiled a lot. In fact, someone observed that, if you added up all the times he smiled before that night, it wouldn’t get close to the number of smiles since that game ended.

It got even better. ESPN got hold of the video of the game and aired it for the first time the following weekend. This turned Jason from a local celebrity into a national folk hero. People across the country could identify with his story. They felt inspired and full of hope. Next, it was the CBS Evening News. Then it was CNN, followed by Good Morning America. The story took on a life of its own. There were so many media requests that Coach Johnson didn’t teach his classes for two weeks. Jason’s mother was getting so many phone calls at work that her boss said, “Unless it’s the President or Oprah, you are not taking any more calls at work.” To his surprise, the next phone calls came from the White House and the Oprah Winfrey Show.  It turns out that even the President of the United States, George W. Bush, wept after watching the ESPN footage. President Bush flew to Rochester, New York to meet Jason.  At the onset of the meeting, President Bush asked Jason, “Do you mind if I call you J-Mac?”

In the first two weeks alone, the family fielded phone calls from 25 Hollywood production companies seeking the rights to Jason’s story.  The McElwain family ultimately decided to go with Columbia Pictures because one of his idols, Magic Johnson, agreed to produce the movie. The following year, he received the ESPY award for “Best Sports Moment of the Year.”

The Jason McElwain story took America by storm. His was the feel-good story of the year. Jason gave people hope. He inspired others. He became the poster child for Autism. Jason exhibited a positive attitude before he ever made it big. He worked hard, served others on the team and never complained. And then, one day, he got his moment. Americans have always had a soft spot in their hearts for the underdog. If Jason could do it, they reason, maybe we can too.

Jason McElwain is one of the 144 “Wednesday Role Models” featured in the Student Athlete Program. This program is designed to improve the character, leadership and sportsmanship of high school athletes. To learn more about this program and how you can implement it in your school: