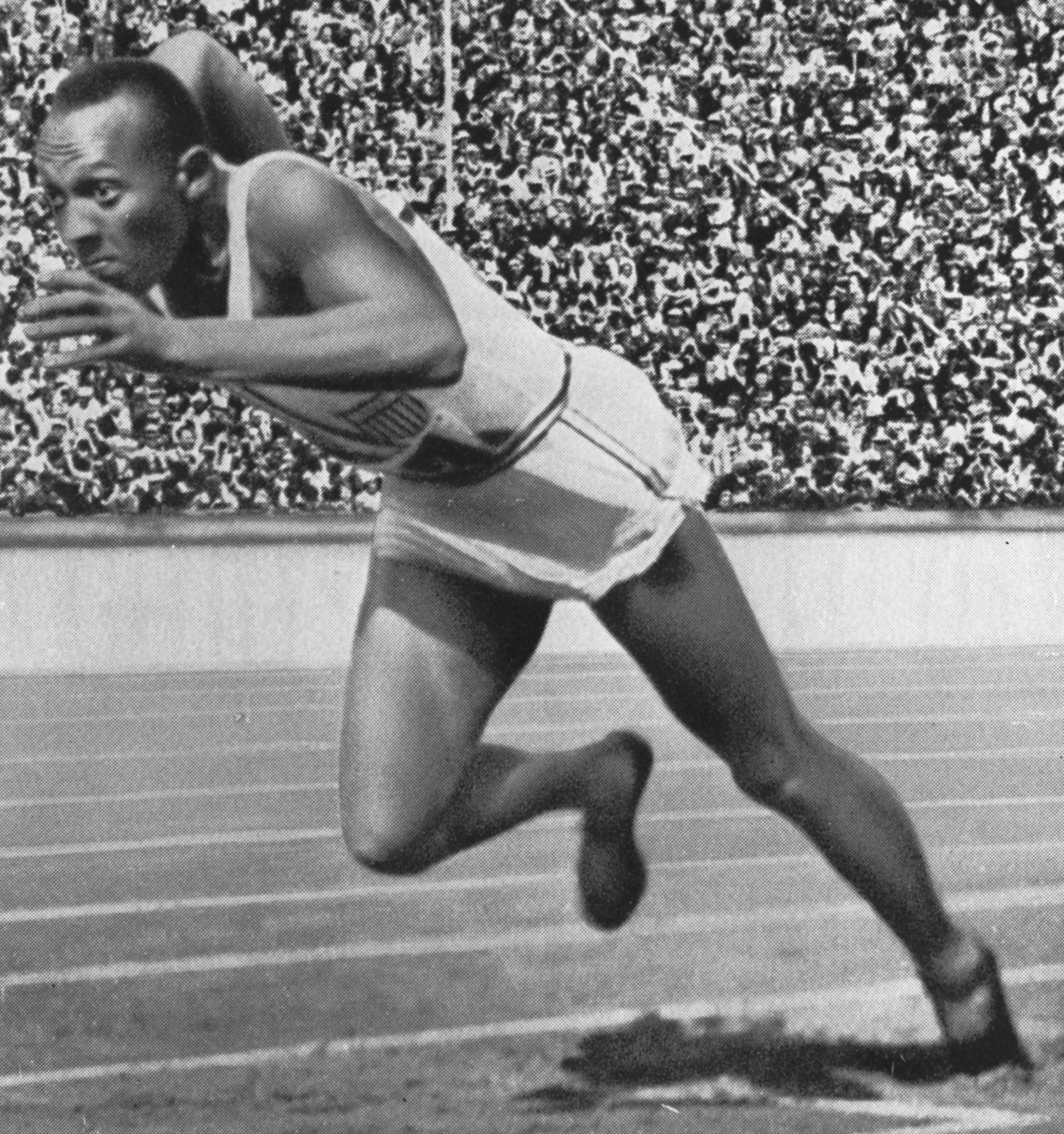 “One chance is all you need.”

Imagine the setting – the summer of 1936, Berlin, Germany. Adolf Hitler, chancellor of Germany and leader of the Nazi party is intimidating most of Europe. Red and black flags with swastikas are waving everywhere. Hitler’s henchmen, the Gestapo and Storm troopers, rule the streets. Hitler believes in the supremacy of the Aryan race (pure-blooded Germans). As the leader of this “master race”, he believes he must control the world. Jews, gypsies and dark-skinned individuals are believed to be inferior, even sub-human. Hitler bans all Jews from participating for Germany in the 1936 Olympics.

It was in this setting that the summer Olympics took place – Berlin, the “Motherland of Germany” under the watchful eye of Adolf Hitler. While the spirit of the Olympic games is to peacefully compete with other nations, Hitler viewed the 1936 summer Olympics as an opportunity to showcase the dominance of the Aryan race. To some extent, Hitler was successful – Germany won more medals and more gold medals than any other country in these games. However, in perhaps the most glamorous event, the 100-meter dash, the presence of one American athlete told a different story.

Born with the formal name of James Cleveland (J.C.) Owens in 1913, he was the 7th of 11 children and the son of a sharecropper in Alabama. At the age of 7, his father expected him to pick 100 lbs. of cotton a day in the summer. At the age of 9, his family moved to Cleveland, Ohio to pursue more opportunities and a better life. On his first day of school, a teacher taking roll asked the new boy his name. The reply was “J.C.”, but the teacher misheard, “Jesse.” The name stuck. The world would come to know the name Jesse Owens.

Owens expressed an interest in running during middle school and competed for East Technical High School in Cleveland. After equaling the world record in the 100-yard dash as a high school athlete, Owens was recruited to run track at Ohio State University. In 1933, Ohio State did not provide athletic scholarships to track athletes, but they did secure Owens with part-time jobs to help pay his bills. Sadly, even as team captain of the track team, Owens was not allowed to live with his white teammates on campus. Likewise, most restaurants in Columbus would not serve him or any other black individuals.

Owens excelled on the track at Ohio State University. He won eight individual NCAA championships during his career. During his junior year, he won all 42 events he entered. In what some call the greatest single accomplishment in sport, Owens broke 3 world records (long jump, 220-yard dash and 220-yard hurdles) and set another (100-yard dash) in the span of 45 minutes. This historic day was bolstered when it was learned that Owens did all of this with a severely-injured tailbone.

In the summer of 1936, Owens qualified for the Olympic games in the Long Jump, 100-meter dash and the 200-meter dash. Owens was easily the most talked about and sought-after athlete at the games. On his first day of competition, August 3rd, he stepped onto the track in front of 110,000 people to run the finals of the 100-meter dash. As Owens would say, “It was a lifetime of training for just ten seconds.” It was the closest race that he would see all week, winning the event by a tenth of a second over fellow American Ralph Metcalfe. Sitting in his Furher’s Box, Hitler watched the top two finishers, both of African descent from the United States take the gold and silver medals.

The next morning Owens struggled to make the finals of the long jump competition. Every competitor gets 3 jumps to achieve a jump that is long enough to qualify for the finals schedule later in the day.  Owens stepped over the line on his first two jumps, meaning that both jumps were disqualified. Despite being the favorite, he only had one chance left or his long jump competition would end abruptly.

An unusual scenario followed Owen’s second jump. Lutz Long, a German athlete with the longest posted jump in the competition introduced himself to Owens and offered some much-needed advice. Long suggested that Owens set his mark at least six inches short of the “foul” line and reminded Owens that he just needed to qualify for the finals. Owens took Long’s advice and easily qualified for the finals. That afternoon in the finals, Long and Owens were tied at 25 feet 10 inches after the 5th attempt.  On his 6th and final attempt, Owens set a new Olympic record, giving him his second gold medal.

After winning the event, Long was the first person to congratulate Owens. Long openly embraced Owens, grabbing his hand and raising it the way a wrestling referee would lift a victor’s hand. This was all done under the watchful eye of Adolf Hitler. It should be noted that Owens and Long never saw each other again but did exchange letters until Long’s death several years later in World War II.  Jesse Owens had a profound respect for Long’s assistance. “It took a lot of courage for him to befriend me in front of Hitler,” Owens said. “You can melt down all the medals and cups I have, and there wouldn’t be a plating on the 24-karate friendship I felt for Lutz Long at that moment.”

The following day Owens easily won the 200-meter dash, establishing his dominance as the world’s fastest athlete. Owens assumed that was the end of his Olympics until something unexpected happened. On the last day of the track and field competition, Coach Dean Cromwell decided to replace Marty Glickman and Sam Stoller on the 4 x 100-meter relay with Ralph Metcalfe and Owens. It has long been rumored that Glickman and Stoller were replaced because they were Jewish. According to multiple sources, German officials asked U.S. officials not to embarrass Germany any further by having Jews beat the master race. Glickman blamed U.S. Olympic Committee president Avery Brundage for authorizing such a move. Nevertheless, the U.S. 4 x 100 relay team won by an impressive 15 yards, setting a new world record in the process.

While there aren’t any direct quotes about Hitler’s thoughts after watching this event, it is well-documented that he quietly crept away before each of the medals ceremony, honoring Owens and playing the national anthem of the United States. One journalist stated, “Hitler was highly annoyed by the series of triumphs by the marvelous colored American runner.”

This feat of winning 4 gold medals was not equaled in the Olympics until the great Carl Lewis won the same 4 events in the 1984 Olympic games. Looking back on his Olympic experience, Owens said, “We all have dreams. To turn dreams into reality, it takes an awful lot of determination, dedication, self-discipline and effort.”

The Olympic games were definitely the pinnacle for Owens. The saddest part of Jesse’s story is that the world’s fastest man never ran another competitive race again. He was only 22. At that time, Owens was married and already had the first of his 3 children to provide for. He tried to capitalize on his new-found fame and land some commercial endorsements, but he was largely unsuccessful. Due to his attempts to secure these endorsements, Olympic committee officials voted to end his amateur status as a collegiate and Olympic athlete.

Despite being characterized as a hero and a national treasure, he still had to return to an America that was not ready to embrace a black man. As Owens learned, “It became increasingly apparent that everyone was going to slap me on the back, want to shake my hand or invite me up to their suite, but no one was going to offer me a job.” Even the president of the United States, Franklin Roosevelt, did not invite him to the White House or send him a telegram.

Owens bounced around from job to job. Among other jobs, he worked at Ford, owned a dry-cleaning company, pumped gas and briefly served as vice president of an affiliate in a negro baseball league. It wasn’t until the 1950’s that Owens achieved financial security when companies began asking him to provide speeches at conferences. He spent the rest of his life speaking to groups and working with children, inspiring others to reach their dreams. Owens died at the age of 66 from lung cancer with his wife and three daughters by his side.

Jesse Owens will forever be remembered as the man with enough courage to stare down Adolph Hitler and win. It didn’t change the future – Hitler still started World War II, culminating in the largest loss of life in human history. However, on that sunny August day, the actions of Jesse Owens loudly told the world that there was no such thing as a master race. He put the first chink in Hitler’s faulty worldview. As President Jimmy Carter said, “Perhaps no athlete better symbolized the human struggle against tyranny, poverty and racial bigotry.”

In 1976, President Gerald Ford presented Jesse Owens with the highest civilian honor – the Presidential Medal of Freedom.  In 2007, ESPN named Jesse Owens as the 6th best athlete of the 20th Century. Not bad for an athlete who ended his athletic career at the age of 22. To be sure, Owens received these awards more so for what he represented to humanity than for his athletic achievements.

Jesse Owens is one of the 144 “Wednesday Role Models” featured in the Student Athlete Program. This program is designed to improve the character, leadership and sportsmanship of high school athletes. To learn more about this program and how you can implement it in your school: