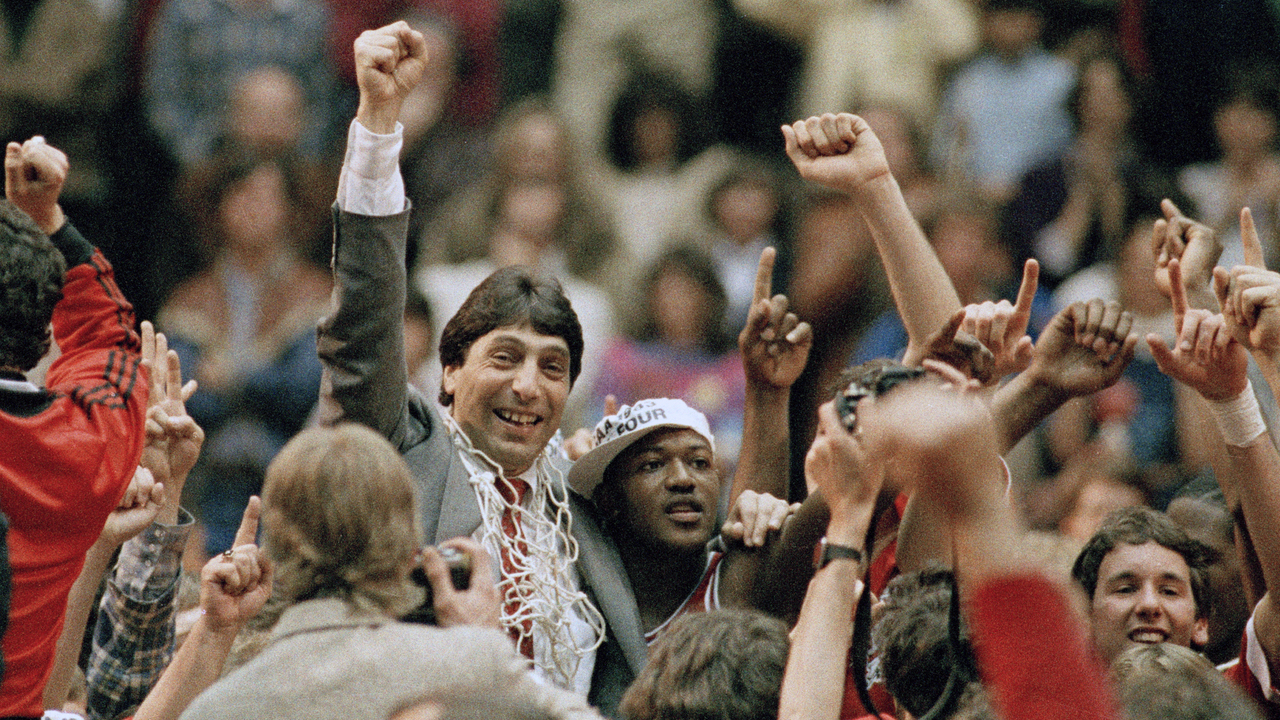 “Nothing great has happened without enthusiasm. I’m going to be enthusiastic and excited every day that God has given me.”

Jim Valvano — known to virtually everyone as Jimmy V — was a college basketball player, coach, and broadcaster. He also was a believer. Every year that he coached, Coach Valvano held one major practice session in which there was no running, dribbling or shooting. No player or coach was allowed to bring a basketball to the gym. This annual practice session was solely devoted to cutting down the nets. Confetti would fall from the rafters and music blared from the speakers as each of his players took turns cutting down a strand from the net. The final piece was reserved for the coach himself. He would climb the ladder, cut the final strand, and wave it to an imaginary crowd. Coach Valvano created this special practice session because he dreamed big and he wanted his players to dream big too. He often said, “When you have a goal, when you have a dream, and when you have a belief, you can accomplish miracles.”

As the head coach of the 1983 North Carolina State University basketball team, Valvano needed a miracle. Partway through that season his star guard, Dereck Whittenburg, had gone down with a broken leg and the NCSU Wolfpack had finished their regular season with a 16-11 record. Coach Valvano knew what everyone else also knew: the only way his players could  make it to the NCAA Tournament would be if they could win their Atlantic Coast Conference Tournament. If they could accomplish that then the Wolfpack would receive an automatic NCAA invitation. And NC State did just that. In the process, they defeated the defending national champion North Carolina Tar Heels with Michael Jordan and the #2 ranked Virginia Cavaliers, who had Ralph Sampson, the reigning national player of the year.

From that moment on Coach Valvano began referring to his team as “a team of destiny.” Apparently, he was correct. As the #6 seed in the West Region, the Wolfpack had to rally time and again from behind to win. After a double-overtime victory in an early round, Coach Valvano coined the now-familiar phrase, “Survive and Advance.” And, that’s what they kept doing. From the Sweet 16 to the Great 8 to the Final 4, the “Cardiac Pack” now found themselves facing the #1 ranked Houston Cougars in the NCAA Finals.

NC State was an overwhelming 11-point underdog. Virtually no one felt they could beat Houston’s powerful Phi Slama Jama team led by Akeem Olajuwon. Yet, with only 58 seconds remaining the teams were tied at 52. NC State possessed the ball and Houston went into a half-court trap defense. NC State frantically passed the ball around the court, trying to hold the ball for the final shot. Then, with only seven seconds remaining on the clock, Dereck Whittenburg received a pass near mid-court that was almost stolen. With three seconds left, he instinctively turned and launched a desperation shot from 35-feet. Seeing that the shot was going to come up short, teammate Lorenzo Charles leaped into the air, grabbed the ball in mid-flight, and slammed it home to win the National Championship. This scene, accompanied by the legendary call from Commentator Billy Packer, “Ohhhh! They won it! On the dunk!” is replayed during the NCAA Men’s Basketball Finals each year.

What’s really fun about this video clip is the image of a relatively short Italian coach — Jimmy V — frantically running onto the court to share this victory with his players. However, every time Coach Valvano approached a player, the player was already hugging someone else. So Jimmy V was seen running hysterically from group to group with little success. “I was like a maniac out there,” Valvano recalled years later. “I’m running around looking for somebody to hug, anybody.” But, just like they practiced many months before, Jimmy V and his team cut down the nets — this time for real.

Jimmy V was no slouch on the basketball court either. He had been a three-sport athlete in high school and he played as a walk-on point guard at Rutgers University. After he graduated, he became an assistant coach for several years before getting head coaching gigs at Bucknell, Iona, and then at North Carolina State. In the ten years that he was head coach at North Carolina State his teams won two ACC regular season championships and two ACC Tournament championships. Jimmy V then stepped down from coaching and went on to have a short, yet successful career as a broadcaster. Along the way, Jimmy V married his high school sweetheart and they had three wonderful girls.

This is a solid resume, but what separated Jimmy V from his peers was his passion and his absolute zest for life. He made that clear in numerous public speeches, saying, “Nothing great has happened without enthusiasm! I’m going to be enthusiastic and excited every day that God has given me.” And he was. From the time of his birth in 1946 to the time of his death in 1993, Jimmy V went 100 miles per hour with a smile on his face. “Jim had a love for life, not just seeing life, but experiencing life,” said friend and Duke coach, Mike Krzyzewski. “He got the most out of every day.”

So, it seemed especially tragic when ESPN announced that Valvano, who was only 47 years old, had cancer and his prognosis was terminal. Jimmy V had only 10-12 months to live. Although he knew his fate and he accepted it, Jimmy V went full throttle into the limited time he had left. He was determined to make this time count. So he proclaimed that he wanted to find a way to beat cancer and, from his hospital bed, he hatched the idea of the V Foundation for Cancer Research. Then, with just two months left to live, Valvano unveiled his plan live at the 1993 ESPY Awards show. He had just been awarded the inaugural Arthur Ashe Courage Award and he used the occasion to state the V Foundation’s motto, which exemplifies his spirit: “Don’t give up! Don’t ever give up!” Jimmy V then encouraged people to give as much as they could to help beat this disease. People were inspired in 1993 and they are still inspired today. As of 2021, his foundation has raised over $290 million for cancer research.

Jimmy V’s ESPY speech became immortal, but it almost didn’t happen. Announcer Dick Vitale had to beg Valvano to leave his hospital bed. Coach K had to accompany him from Duke Hospital to the ESPY Awards. “He was throwing up the whole time,” said Coach K. “There was no way that I thought that he would do a speech that night.” Vitale had to help Valvano up to the stage. Afterward, Vitale, Coach K, and Joe Theisman practically carried him back to his seat. However, in between those two moments Valvano provided one of the greatest speeches ever heard. As his lifelong friend, Sonny Vaccaro, framed it, “God gave him words that night… to give to us.”

We will end this chapter with some of those important words that Valvano left us with that night. Words about passion, love and life:

To me, there are three things we all should do every day, every day of our lives. Number one is laugh. You should laugh every day. Number two is think. You should spend some time in thought. And number three is, you should have your emotions moved to tears, could be happiness or joy. But think about it. If you laugh, you think, and you cry, that’s a full day. That’s a heck of a day. You do that seven days a week, you’re going to have something special.

Jimmy Valvano is one of the 144 “Wednesday Role Models” featured in the Student Athlete Program. This program is designed to improve the character, leadership and sportsmanship of high school athletes. To learn more about this program and how you can implement it in your school: