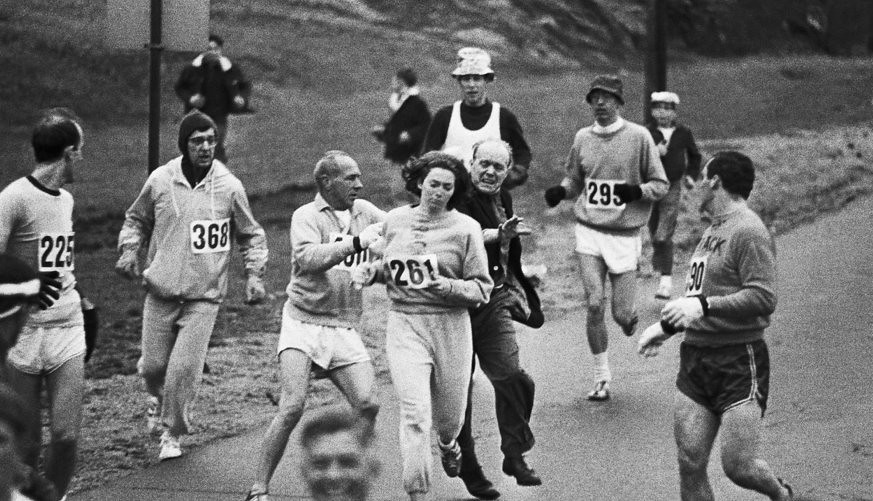 “All you need is the courage to believe in yourself and put one foot forward in front of the other.”

The 71st annual Boston Marathon was held on April 19, 1967.  This particular day was filled with freezing rain, snow and strong winds. The weather was absolutely atrocious for the 601 runners who had anxiously awaited this day. However, for one participant named Kathrine Switzer, the weather conditions were the least of her worries.  Kathrine was the first and only registered female runner in the marathon lineup and she had something to prove.

This was a time of gender inequality in sports. There were no written rules stating that women couldn’t compete in the Boston Marathon. But many people thought women were too weak to run a 26-mile race. The Boston Marathon had been an all-male event for the past 70 years and women were not welcomed. Kathrine was ready to change that fact.

Kathrine loved to run and she was good at it. Unfortunately, women’s cross-country didn’t exist at Syracuse University, the school she attended.  As a result, Kathrine took it upon herself to unofficially train with the men’s cross-country team. This is where she got the motivation to run the Boston Marathon. Her coach, Arnie Briggs, had 15 Boston Marathon races under his belt and he loved to talk about those experiences.

Kathrine was ecstatic. “Hot damn, she thought, I have a coach, a training partner, a plan, and a goal — to run the biggest race in the world — Boston.” Suddenly, Kathrine had an opportunity to fight for what she believed, no matter how unaccepted it might seem to others. This is the very definition of integrity – aligning your behavior with your values. Kathrine Switzer believed women were capable of running a marathon and she was dead-set on proving it.

Three weeks before the marathon, Kathrine filled out the entry form and signed her name as she always did, “K.V. Switzer.”  She was assigned number 261 and, in so doing, became the Boston Marathon’s first official female entry. Three male supporters would run with her: Coach Arnie, Tom Miller (her boyfriend, an ex–All American football player known as Big Tom Miller), and John Leonard, a member of the all-male Syracuse cross-country team.

After months of hard training, race day finally arrived. The Boston Marathon is always on Patriots’ Day, honoring the people who fought in the Revolutionary War. Kathrine thought it was pretty cool to participate in a race that had such historical meaning. On this April day, however, she was planning to make her own history.

Kathrine and her colleagues made the five-hour drive from Syracuse to Boston. The four of them arrived at the race location and made their way toward the start line. With the race number 261 pinned to her favorite sweatshirt, Kathrine was about to embark on a life-changing journey.  This was an extraordinary moment for Kathrine and the future of sports.

All runners had to have their race numbers checked as they entered through the gate.  But it was cold, snowy and disorganized. The officials seemed irritated and shuffled people along quickly. As Kathrine got closer to the start line an official tapped her shoulder and said “C’mon runners, let’s move on in, just keep it moving here!” And just like that, she was in. Shortly thereafter, the crowd heard the loud bang of the starting gun and the race began.  Kathrine said she felt like a “pilgrim going to Mecca.”

The first few miles were a piece of cake for Kathrine. Then around mile four, there was a commotion in the crowd.  A press truck quickly approached Kathrine and her pack.  The vehicle carried writers, photographers and the race director, Jock Semple. Just after this sighting, Kathrine heard another unfamiliar sound amid the runner’s smooth pitter-patter.  As the thumping sound got louder, she realized someone was chasing her.  She turned around and was startled to see Jock’s angry face just inches away.

“Get the hell out of my race and give me those numbers!” Jock yelled. As he said this, he grabbed Kathrine and tried ripping her race numbers off her sweatshirt.  Kathrine was so shocked and utterly terrified that she slightly wet her pants. As Jock clung to her sweatshirt, Kathrine struggled to break free. It wasn’t long before Big Tom came charging over like a bull. In one fell swoop, he body-checked Jock, who was lifted into the air and then slammed to the ground. Kathrine looked to Coach Arnie for some guidance and all he could say was “Run like hell!” And with their adrenaline pumping, they continued the race faster than ever. This unbelievable incident was caught on camera and the photo is now considered one of the most influential moments in the women’s rights movement.

Kathrine was in shock and felt awful about what just happened. She had been physically attacked. For a brief moment, she thought about dropping out, but instinctively knew that wasn’t an option. Years later, she recounted her inner voice during the race.

“I knew if I quit, nobody would ever believe that women had the capability to run 26-plus miles. If I quit, everybody would say it was a publicity stunt. If I quit, it would set women’s sports back, way back, instead of forward. If I quit, I’d never run Boston. If I quit, Jock Semple and all those like him would win. My fear and humiliation turned to anger!”

And so, she continued. The freezing weather persisted and blisters covered her feet. Nevertheless, Kathrine’s integrity brought out the best in her and she knew she could handle the conditions. She knew the pain meant nothing when working hard for a higher purpose.  She realized that after this race, she could be a role model that helped bring more opportunities to women.

And, while all this thinking was going on, Kathrine noticed that she was getting close to the finish line. Completely soaked and greeted by only a handful of reporters (none of whom cheered), Kathrine completed the race in a time of 4 hours and 20 minutes. The race was over, but her quest for change was just beginning.

Kathrine’s story hit the newspapers and eventually she became a well-known public figure.  With this fame, she was able to impact the world of running like no other. Kathrine was a primary force behind getting women officially accepted into the Boston marathon, which finally took place five years later, in 1972. Fast forward to 2017, exactly 50 years after Kathrine’s first Boston Marathon: 13,698 women had registered to run, representing almost half of the race entries. The landscape of women’s long-distance running clearly changed and Kathrine Switzer — and other women to follow — played an enormous role in that change.

Kathrine’s legacy didn’t end there. In 1978, she created an organization called the Avon International Running Circuit, which created international, women’s-only races. More than 200 women’s races in 27 countries were established. In some countries these races were the first sporting events of any kind for women. Her leadership also paved the way for the International Olympic Committee to admit the women’s marathon into the 1984 Olympic Games.

The significance of her bib number (261) on that historic day in Boston is not lost on women of the current generation. She still receives letters from women all over the world who embrace her legacy. Many carry the number in marathons and some even get a “261” tattoo. This means a lot to Kathrine who, at age 72, still runs today. Speaking in response to these letters, she said, “What they were really telling me was ‘That number makes me feel fearless.’”

Today, Kathrine runs her non-profit organization called 261 Fearless, which means “fearless in the face of adversity.” The goal is to empower women not only through running, but through everyday life challenges. Support is provided through running clubs, and educational programs and events.

Kathrine teaches us that keeping your integrity intact can help you get through any situation. Her story is proof that you can accomplish just about anything when stay true to what you believe. Like she once said, “All you need is the courage to believe in yourself and put one foot forward in front of the other.”

Kathrine Switzer is one of the 144 “Wednesday Role Models” featured in the Student Athlete Program. This program is designed to improve the character, leadership and sportsmanship of high school athletes. To learn more about this program and how you can implement it in your school: