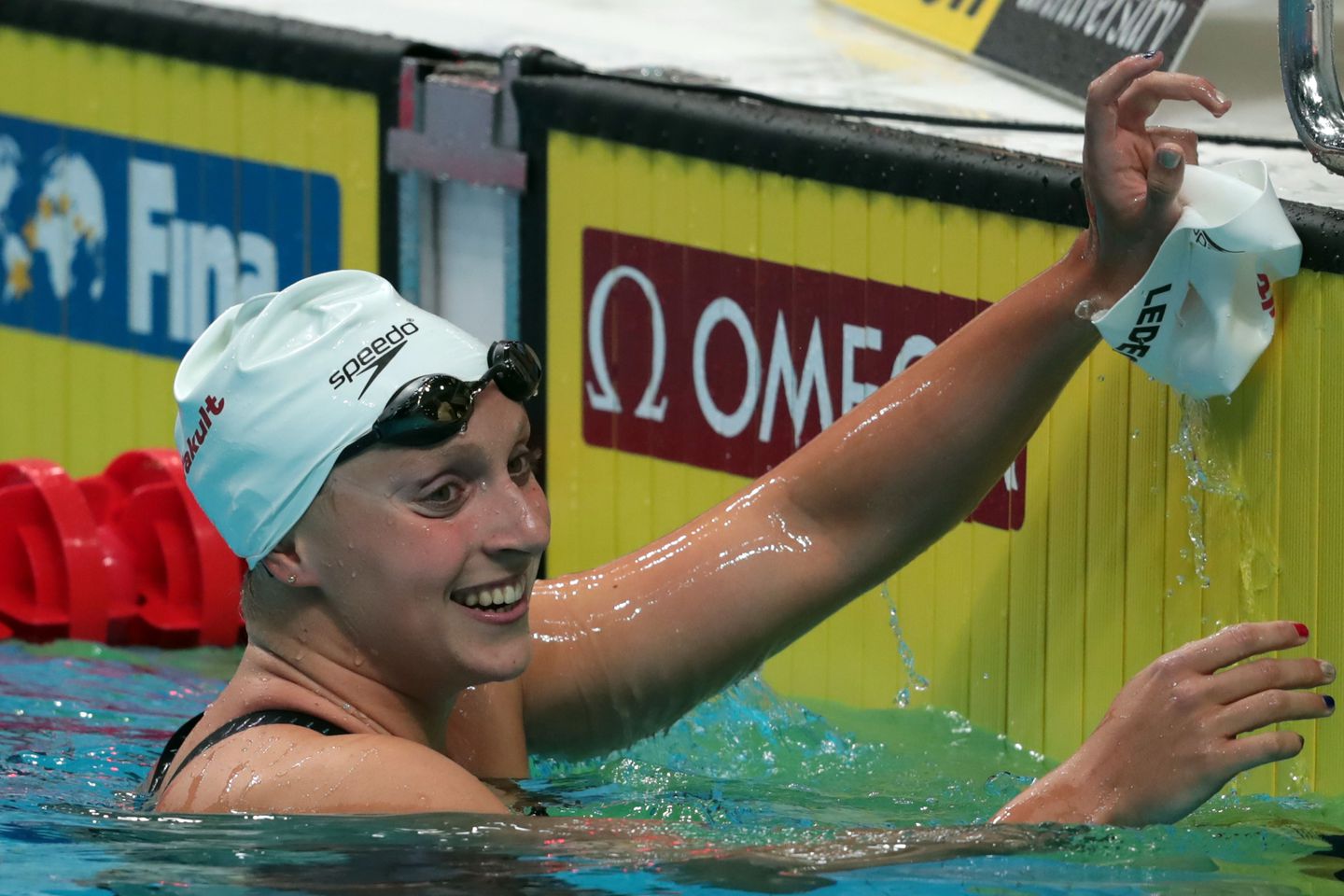 “What I’ve done over the past couple years has been pretty great, but even that doesn’t define my swimming. Working hard and doing everything I can to be successful should be my identity.”

Katie Ledecky certainly made a splash when she qualified to swim the 800-meter freestyle race in the 2012 Summer Olympics – at the age of 15. Not only did she win the gold in that event by more than four seconds, but she also broke the United States record set 23 years prior by Janet Evans. By 2013, Katie would shatter two world records and win four world championships – all before she got her driver’s license. Remarkably, as of 2022, she has earned seven Olympic gold medals and 22 world championship gold medals. This is a historic accomplishment; No other female swimmer has won so many. Katie also holds the fastest times ever in the women’s 400, 800, and 1500-meter freestyle. To this day, Katie’s accolades continue to multiply, making her the greatest female swimmer of all time.

Katie was born to Mary Gen and David Ledecky on March 17, 1997, in Bethesda, Maryland, and joined her first swim team six years later. Her mother had been a collegiate swimmer at the University of New Mexico, and had always believed that swimming was a very important life skill. One of Katie’s favorite childhood memories was meeting her role model, Olympic champion Michael Phelps, at an autograph signing. “And then five years later, I was on the Olympic team with him,” recalled Katie. “So, it was pretty surreal in that moment, to think back to meeting him when I was just starting to swim.” Shortly after meeting her idol, Katie decided to take swimming more seriously. This was a turning point because her new dedication started to pay off in the pool.

Katie’s talents began to excel and she secretly made a goal to qualify for the 2012 Summer Olympics. During this time she was training intensely with the Nation’s Capital Swim Club.  This is where she met coach, Bruce Gemmell. He worked diligently with Katie from 2012 – 2016, helping to turn her dream into reality. Coach Gemmell believes it’s Katie’s unique mix of technique, training, and mindset that has turned her into such a versatile athlete; She has set world records in both endurance races and sprints.

Katie’s technique is quite different than most female swimmers. Her method is described as a “loping” stroke, meaning she grabs water and pulls like a rock climber. “It’s not the prettiest stroke, but it’s what’s most efficient for me. And I think I kick a little more than most swimmers do,” explained Katie. Olympian Ryan Lochte once said,

“She swims like a guy. Her stroke. Her mentality. She’s so strong in the water. I’ve never seen a female swimmer like that. She gets faster every time she gets in.”

Another important key to Katie’s success was maintaining a competitive training atmosphere.  Katie found that the best way to flourish and push past the limits was to train rigorously with the boy’s team.  “She’s got a great training group – mostly boys, almost all boys. And she’s willing to compete with them every single day,” Coach Gemmell observed. Moreover, during her time with the Nation’s Capital Swim Club, Katie swam approximately 135,000 laps per year, which is equivalent to 1,918 miles.  If you think that sounds exhausting, don’t forget she also had to keep up with her studies!

In addition to her aggressive training tactics, goal-setting became a huge motivator for Katie. Her method was simple and to the point. She simply wrote “want times” onto slips of paper as a visual and constant reminder of what she wanted to achieve. “Goal setting has definitely stuck with me,” Katie revealed. “Those ‘want times’ were always very ambitious. That part has carried on. I try to set goals that seem kind of unreasonable at first. As I work toward them, the more reasonable they look.”  Katie would use her “want times” approach for practices, competitions and even before the Olympic Games.

In June 2015, Katie graduated from high school at Stone Ridge School of the Sacred Heart. In true Ledecky form, she left a legacy of breaking every swim event record except the 100-meter breaststroke. Since that time, Katie has continued to rewrite record books worldwide.  For example, at the 2015 World Championships, she became the first person ever to sweep five events. Her accomplishments at this event became known as the “Ledecky Slam.”

Katie is aggressive in the water, but in all other respects, people have found her to be humble, calm, and collected. Everyone enjoys Katie’s company whether she is on the starting block or hanging out with teammates in the locker room. The team bond is something Katie has always cherished. Perhaps this bond persuaded her to turn down millions of dollars in professional offers for a chance to swim at Stanford University. When asked about her decision to attend college, Katie explained,

“I want to go to college, get my education and swim in college. I’m not concerned about money at this point. I enjoy representing my team, my country, my family, myself. I don’t think at my age I need to represent something more than that.”

After two years of collegiate swimming at Stanford, Katie decided it was time to turn pro. Her reason for making that transition was mostly due to timing. She wanted to prepare for the 2020 Olympics to the best of her ability, and this required her to change up her training routine.  Although Katie now swims professionally, she has continued her studies at Stanford University.  When asked about her decision to go pro, Katie explained, “I am so grateful to have had the opportunity to train and swim collegiately for two years alongside some of the greatest women swimmers of this generation. (But) I am equally excited about the opportunities and challenges ahead as I continue to compete internationally as well as further my education.”

Now you can understand why Katie is truly one of a kind. Her preparation in and out of the swimming pool has turned her into a worldwide phenomenon. She has earned countless awards, medals, and even a spot in Time Magazine’s list of 100 Most Influential People (2018).  Yet what’s most important to Katie is not her accomplishments, but how she prepares herself to get there: “What I’ve done over the past couple years has been pretty great, but even that doesn’t define my swimming. Working hard and doing everything I can to be successful should be my identity.”  Her preoccupation with preparedness indicates that Katie Ledecky will continue to make waves around the world for a long time.

Katie Ledecky is one of the 144 “Wednesday Role Models” featured in the Student Athlete Program. This program is designed to improve the character, leadership and sportsmanship of high school athletes. To learn more about this program and how you can implement it in your school: