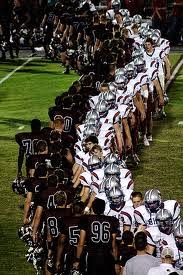 The Kentucky High School Athletic Association (KHSAA) has banned post-game handshakes between players from opposing high schools. The main reason for this new rule is that 24 fights have broken out in the state of Kentucky following high school athletic contests. The KHSAA warned schools that if the rule is disobeyed, the individual schools will be held responsible for the outcomes.

http://www.youtube.com/watch?v=RldUg5kISB0 (check out the story here)

Author’s Perspective #1: This is a litigious society and organizations like the KHSAA have lawyers that advise them on legal concerns. There is no doubt that a lawyer told them, “If someone gets seriously injured as a result of these handshakes, the organization could be held responsible.” So, some knucklehead at the top gets scared and makes an impulsive decision that protects the organization instead of looking at the larger picture.

Author’s Perspective #2: What is the larger picture, you ask? The main reason for high school athletics is to promote competition & sportsmanship. Players and teams work hard to win their competitive matches, but whether a team wins or loses, it is important to show respect to the other team. It is through the post-game handshake that athletes learn words like grace, dignity and humility. The irony is the KHSAA is banning the very thing that is put into place to promote sportsmanship.

Author’s Perspective #3: How many handshakes do you think took place in Kentucky after high school sporting events in the past two years? 100,000? 200,000? 1,000,000? I don’t know, but it seems ridiculous to ban the entire practice due to 2 dozen fights. That is about one half of one half of one percent. We need to stop creating rules for a few bad apples and penalizing those who can handle themselves appropriately.

Author’s Perspective #4: Just a thought, but instead of banning the post-game handshake, ban the players who get in fights. The KHSAA should take a page from last week’s blog where Coach Labrum suspended his players for a lack of character. My guess is that if he were in charge in Kentucky, athletes would get the idea that fighting is not tolerated.