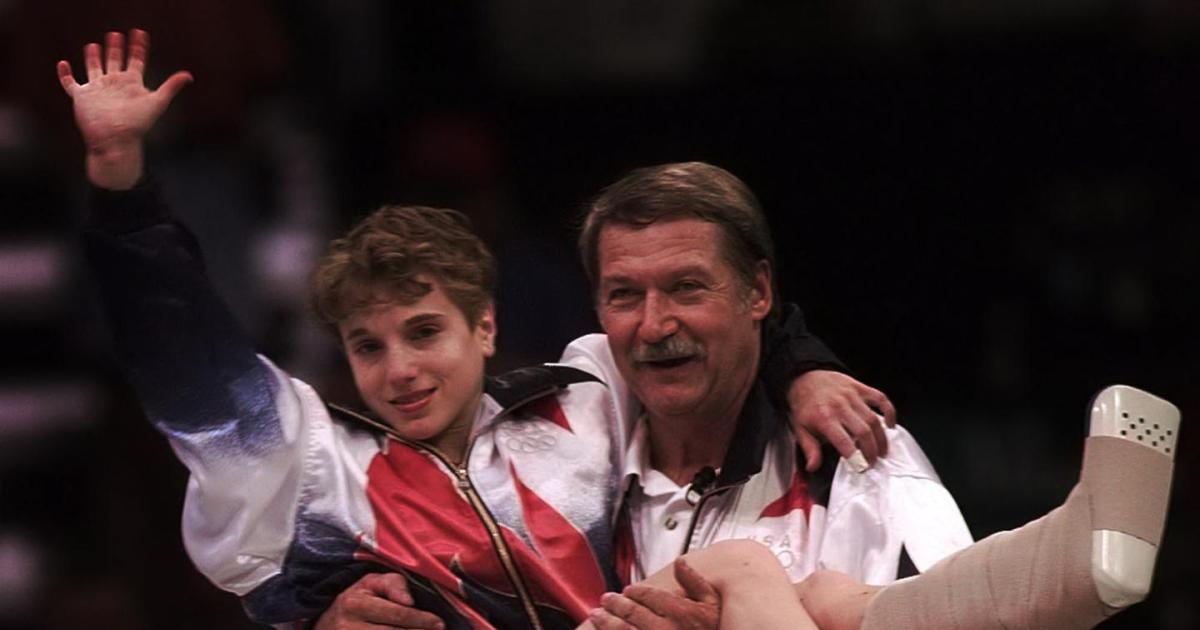 “What happened in Barcelona only made me want it more. I decided that I wanted Atlanta. Nothing and no one was going to keep me from reaching my dream.”

Every four years, Americans fall in love with gymnastics. This is particularly true for women’s gymnastics, which dominates the television coverage during the first week of every Olympics. For the other three years and 51 weeks in between, gymnastics is largely forgotten. It toils in relative obscurity. Yet, as the public turns towards more popular sports, gymnasts continue to train and sacrifice, probably more so than any other athletes in the world. There should be no doubt that each gymnast who makes the Olympic team undoubtedly exhibits a great deal of determination to get there.

Kerri Strug is the perfect example. Kerri’s introduction happened when she was just three years old. Her older sister, Lisa, was already a promising young gymnast. Kerri began attending those practices with her mom and naturally fell in love with the sport. As Kerri grew older, she started mimicking what she saw. By the time she was eight, she practiced 2 hours a day with a private coach. Based on her early success and her body type, coaches from elite gyms began recruiting her to train full-time. In 1991, at the age of 13, she opted to join Bela and Martha Karolyi at their elite training facility in Houston, Texas. They were the best. The Karolyi’s had trained 17 Olympic athletes by 1991. As Kerri said, “Bella is a dream maker.”

Kerri lived with a host family and went to a school that worked with her intense training schedule. She trained 6-8 hours a day, 6 days a week. The Karolyi’s were demanding. Her four-foot-six-inch 75 lb. frame was tested in every way possible. More than a few times Kerri called her mom begging to come home. So, why did she stay? She was determined. “I wanted to compete,” Kerri said. “This was something I knew I could do and I wanted it more than anything.” She had her eyes and her heart set on the 1992 Olympics in Barcelona, Spain.

Performing a double handspring in the tuck position at full speed requires a lot of trial and error. Imagine how many times a gymnast falls while attempting to do a backflip off of a four-inch-wide beam that extends four feet off the ground. Kerri and the other elite athletes were usually sore and hurting. Sprained wrists, twisted ankles and stitches come with the territory. Kerri also suffered some major injuries. She fractured her sternum (age 9); tore her stomach (age 15); fractured the L4 and L5 vertebrae (age 16); ruptured her eardrum (age 17); and tore her ligaments and tendons during the 1996 Olympic Games (age 18).

Kerri made her first Olympic team in 1992 at the age of 14. Of the 545 American athletes who made the Olympic team, Kerri was the youngest competitor.  Her goal was to compete for the all-around title. She felt confident. “I am going to hit everything,” she wrote in her diary. “I can do it and I will do it.” On the parallel bars, out of 10 possible points, she scored a 9.862. On the Balance Beam – 9.75. On the floor exercise, she scored a 9.837. Finally, on the vault, her best event, the judges awarded Kerri a 9.95. Her strong performance helped America win a bronze team medal. It was all so exciting.

Kerri also felt confident that she had performed well enough to earn a place in the all-around competition. To qualify, a competitor must finish in the top 36. The one caveat is that only three gymnasts from each country can qualify. She kept looking up at the board but she couldn’t figure out if she made it. She finally spotted her sister in the audience and began shouting, “Did I make it? Did I make it?” Her sister quietly shook her head no. “When Lisa told me, it hit me really hard,” Kerri said. “I stood paralyzed. Tears filled my eyes and I had such an empty feeling inside my stomach.” This feeling only heightened when she realized that her teammate, Kim Zmeskal, scored .014 higher than Kerri. After all the training and sacrifice, Kerri missed her dream by four-thousandths of a point.

Many thought Kerri would retire at that point. However, Kerri became more determined. “What happened in Barcelona only made me want it more,” she said. “I decided that I wanted Atlanta. Nothing and no one was going to keep me from reaching my dream.”  Thence followed another three years and 51 weeks of stress, self-denial, social isolation, pain, and unceasing mental and physical labor.

And exactly four years later, Kerri did make the 1996 Olympic team. Termed the Centennial Games, they were held in Atlanta. Kerri was stronger. She was more confident. She had a new attitude. “It’s time to show everyone how far I’ve come,” she wrote in her diary a few days before the games. “It’s my turn to shine.” Her team was dubbed the Magnificent Seven and they were favored to win a team gold medal. This was a big deal because Team USA had never won at the Olympics. This team bonded. They made a pact that no one would think about the individual competition until the team competition concluded.

More than 1 billion people tuned in to the event team finals on June 23, 1996. Another 36,000 people packed the Georgia Dome for a distinctive home-court advantage. The Americans started their rotation on the parallel bars. Everyone hit their routine. Kerri scored a 9.782. Next up was the balance beam. Again, everyone performed admirably. Kerri received a 9.737. On the 3rd rotation, Kerri hit the routine of her life, receiving a 9.837 on the floor exercise. Team USA had a huge lead over Russia heading into their final event – the vault. The only thing that could keep them from winning the team competition would be if several members fell. “And that just never happens. Never ever,” Kerri thought.

The unthinkable started to happen. A bobble here, a step there. Maybe the nerves were getting to the Americans. Dominique Moceanu was second to last for the Americans. She fell on her first vault. The crowd grew quiet. Dominique fell again on her second attempt. 9.2 was all she could muster. It all came down to what Kerri could do. If Kerri could score a 9.4 or better on either one of her vaults, the Americans would win gold. Kerri ran as fast as she could down the runway, went into her roundoff, flipped onto the vault, twisted, flipped and… fell backwards on the landing. It was the first time Kerri fell in competition in over a year. Worse, when she landed, she heard something rip inside her left ankle. She also felt a searing pain. “I’ve had all sorts of pains in my life, but this pain was like none I had ever had before,” she later recounted.

She limped over to Bela Karolyi and said “My foot, my foot.” She asked, “Do we need this?” Bela replied, “Kerri, we need you to go one more time. We need you one more time for the gold.” Bela then added his famous words of encouragement, “Kerri, you can do it.” She nodded and hobbled back down the runway. She was 77 feet away from what she had trained for her whole life.

When the green light came on, Kerri gathered all her strength. She ran with all her might. She was performing the same vault as before – the Yurchenko 1 ½.  Once again, she went into her roundoff at 45.8 feet, flipped on the vault, twisted, flipped and slammed into the floor on both feet. Kerri heard another rip in the ankle and immediately hopped to one foot. She quickly saluted the judges and fell to the ground. “The pain knocked me to the mat, a pulsating, pull-your-hair-out, you’re going to die pain,” she recalled. She started crawling toward the stairs not knowing if the judges would count her last vault as a fall. “Is it legal,” she cried. “Are they going to count it as a fall?”

The trainers carried her to the training room underneath the stands. Then Bela came in screaming, “We won! We won! Kerri, you did it! You did it!” 9.72. Within minutes, the medal ceremony was about to start without Kerri. Bela then said, “Kerri, you’re going out there. You just put those gold medals in your country’s hands. Even if I have to carry you, you’re going out there.” And, that’s what he did. In one of the most iconic scenes in Olympic history, Bella Karolyi carried Kerri Strug to the podium to receive her gold medal with her teammates. The crowd went nuts.

Kerri still had her dreams of winning the all-around title and winning event titles, but that was just not meant to be. Kerri had seriously damaged her ankle and torn ligaments and tendons. “I reached one very important goal that affected millions, maybe billions of people,” she said. “I had to accept it and appreciate what it meant to people and to me.” She watched the remainder of the competition from the stands as a spectator. Kerri immediately retired after the Atlanta Games and never competed again in competition. What a way to go out.

Kerri Strug is one of the 144 “Wednesday Role Models” featured in the Student Athlete Program. This program is designed to improve the character, leadership and sportsmanship of high school athletes. To learn more about this program and how you can implement it in your school: