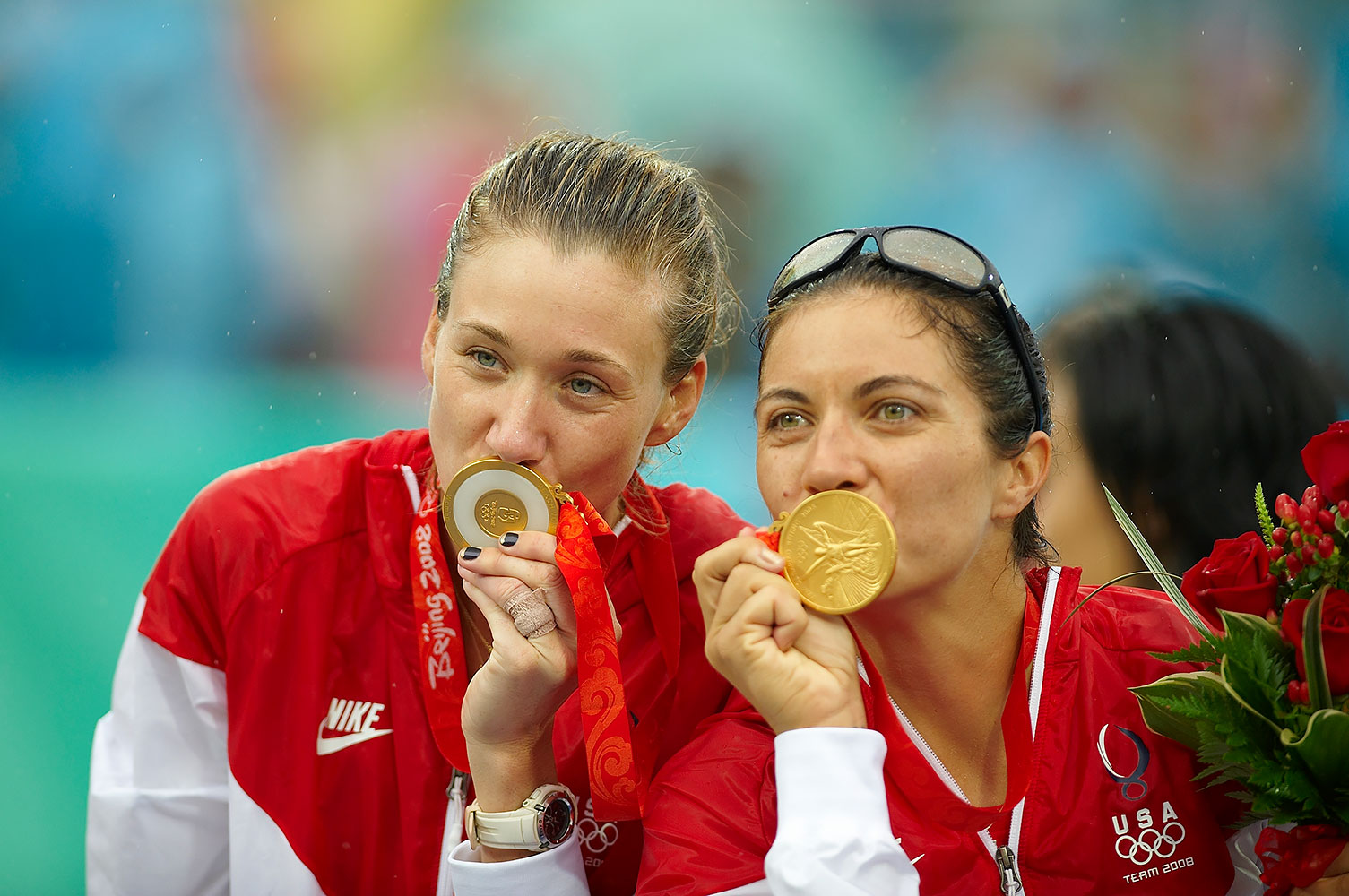 “It takes time to develop trust and confidence in each other (and) get the handle on teamwork…  We felt as if we both could play blindfolded.”

But, as a team, Misty and Kerri became icons. They ended their journey at the 2012 Olympic Games as the greatest beach volleyball team of all time. “What makes Kerri and Misty so in-sync as a duo is their ying and yang,” said Jennifer Kessy, fellow volleyball player. “They are very opposite. They balance each other out. They need each other. They come together and make this pretty amazing team.”

It was actually Misty’s parents who got the pair together. Misty’s parents approached Kerri’s parents at dinner in the Olympic Village after their daughter’s “disappointing” 5th place finish. Kerri’s initial response about playing beach volleyball was pretty negative, “I don’t play beach volleyball because I don’t want to look like an idiot in the sand.” Kerri thought about it for a while, but ultimately decided to visit Misty in Southern California and give it a whirl. The heavens didn’t magically open up that day. It took time to develop their chemistry. “It’s unrealistic to think success will come instantly for a partnership,” Misty smartly commented. “It takes time to develop trust and confidence in each other, get the handle on teamwork and the knack for court sense. It takes time to know what your partner is thinking and how she will respond in various situations.”

They began playing in tournaments during the 2001 season. They hired a coach, Dane Selznick, to develop their teamwork. “Eventually, Dane got us to the point where the game became totally instinctive every time the ball was in the air,” Misty commented. “I felt as if we both could play blindfolded.” Slowly, but surely, the pair began to gel.  Slowly, but surely, the pair began to win championships. By the time, the 2004 Sydney Olympics arrived, they were the #1 seed and the prohibitive favorites.

The team of Kerri Walsh & Misty May worked perfectly together like “Fred Astaire and Ginger Rogers.” They won the gold medal without losing a set, becoming the first Americans to win gold in beach volleyball.  After defeating the Brazilians 21-17, 21-11, Kerri fell to her knees and Misty tackled her hard. “I didn’t care if I’d broken both of her knees in the celebration,” Misty said. This photo became the iconic moment of the 2004 Olympic games. Mission complete.

Of course, this Olympic duo was not through.  They continued their partnership and dominated beach volleyball for the next several years. In 2008, Kerri and Misty rolled into the Olympics in Beijing, China, once again considered the overwhelming favorites to win gold. They were riding a streak that boasted 101 straight match wins and 18 consecutive tournament victories. And, once again, they rolled through the competition without losing a set. The gold medal match was played under a torrential downpour, but even poor weather couldn’t stop this team. They defeated the #1 Chinese team 21-19, 21-18. The announcer made the following call on match point: “Kerri slammed it straight down the center, putting an exclamation point on their victory, on their careers, and on history.”

After the 2008 games, the pair decided to take a break. Kerri and her husband decided to start a family. Misty decided to take on other life challenges. One of Misty’s first adventures was Dancing with the Stars. She was doing well in the competition until she slipped in her high heels and tore her Achilles tendon. It would be 18 months before Misty would play volleyball again. Misty, however, didn’t want to go down this way. One day in 2010, she told her husband that she needed to give world-class beach volleyball one more shot before officially retiring. Then she told Kerri about her decision to play again.

That “one shot” was the 2012 games in London, England. Kerri and Misty were no longer the number 1 seed and they in fact did lose a set in a preliminary match. However, they dominated the competition and won their third Olympic gold medal by defeating the #2 American team, 21-16, 21-16. It was a fitting end for the most accomplished duo in the history of beach volleyball. They had won all of the big points in all of the big matches.

“Misty May and Kerri Walsh did for volleyball what Wayne Gretzky did for hockey and Magic Johnson did for basketball,” commented volleyball player, Brian Gimmillaro. “They all changed the way the game was played.” This duo will be forever remembered as consummate teammates. They had perfected their communication and trust until they could anticipate each other’s movements in highly important moments. They were tremendous teammates who proved to be an unbeatable team.

Misty May and Kerri Walsh are two of the 144 “Wednesday Role Models” featured in the Student Athlete Program. This program is designed to improve the character, leadership and sportsmanship of high school athletes. To learn more about this program and how you can implement it in your school: