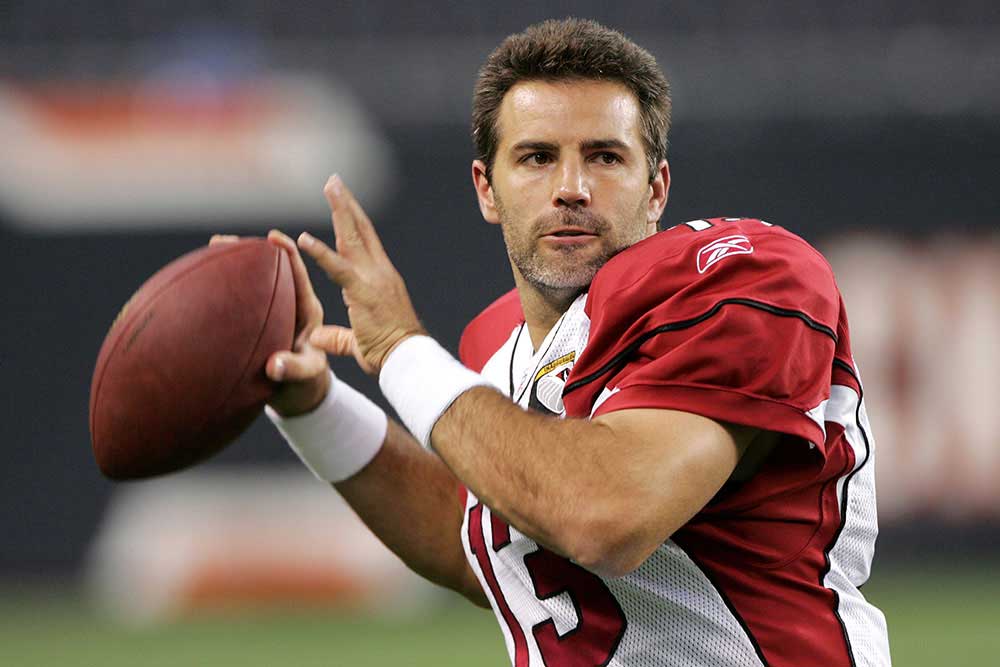 “Whatever your situation in life is, I hope my story is of some value to you. No matter how discounted you might be, if you stay true to your principles, believe in yourself and keep working hard, good things eventually happen.”

“Who is this guy?” was a common refrain during the 1999 NFL season. His teammates asked this question when the St. Louis Rams starting quarterback went down with a serious injury in the preseason and head coach Dick Vermeil named Kurt Warner as the starter for the season opener. After Kurt threw three touchdown passes in each of his first three games, Sports Illustrated put him on the cover with the caption, “Who is This Guy?” After Kurt threw for 4,353 yards and 41 touchdowns and he was named the regular season MVP, defensive coordinators were asking the same question. Then, after throwing a 73-yard game-winning touchdown pass to win Super Bowl XXXIV and being named the Super Bowl Most Valuable Player, the whole sporting world collectively took notice. Not only did they want to know who this guy was, but where did he come from, and why he did not start a game in the NFL until he was 28 years old?

Twenty years before this climactic moment, Kurt Warner was enduring a tough upbringing in the small town of Cedar Rapids, Iowa. His parents divorced when he was just six years old. His father would periodically disappear from his life and his mother struggled to pay the bills. Then Kurt and his brother endured their mother’s second marriage to a lousy guy who mistreated all of them. Fortunately, Kurt developed into a gifted athlete who worked hard to succeed. “Not only did I love sports, but I also had an internal fire that caused me to push ahead and develop my skills.”

Ten years before this Super Bowl moment, Kurt had received only one modest scholarship offer to play football in college. This offer came from Northern Iowa University, a Division 1-A school without much of a football pedigree. Kurt subsequently was red-shirted his freshman year and then sat on the bench for the next three. He almost transferred because he felt like he wasn’t getting a fair shot. However, he got his opportunity in his final year. Kurt made the most of it and he took his team to the playoffs. He later was named the Gateway Conference Offensive Player of the Year.

Four years before being named the Super Bowl MVP, Kurt had gone undrafted in the 1994 NFL draft. He briefly signed with the Green Bay Packers but was cut during the pre-season. So Kurt went back home to Cedar Falls and worked the graveyard shift at the Hy-Vee Grocery Store. He was paid a minimum wage of $5.50 per hour and lived in the basement of his girlfriend’s parents’ house. His girlfriend, Brenda, also was facing hard times. A single mother with two children, she had been forced to move back in with her parents. Even worse, one of her children had serious mental impairments because Brenda’s ex-husband had accidentally dropped him on his head in the shower.

Common sense might have dictated that Kurt and Benda not get involved with each other. After all, Kurt was down on his luck and so were Brenda and her kids. But they decided that good people supported each other in difficult times. Accordingly, Kurt worked 8 hours each night and took care of the kids by day so that Brenda could finish her nursing degree at a local junior college. They bought groceries with food stamps.

“Talk about a humbling experience,” recalled Kurt. “The floor was concrete, and it was really cold down there. We always had to wear sweats and socks.” However, Kurt and Brenda never stopped believing in themselves as a family. And even though it seemed like everyone had forgotten about him, Kurt never gave up on his dream of playing professional football

With no NFL team willing to give Kurt a shot, he decided to play in the Arena Football League. For three seasons he was the starting quarterback for the Iowa Barnstormers. This was not exactly a high-profile job. Still, it paid better than the grocery store and he loved playing football. Kurt also married Brenda and adopted her two children. Kurt was playing football and the four of them were a solid new family. Kurt was never a wild party guy, but he began to make some serious life changes. He stopped drinking and swearing. He led a weekly bible-study group for his Arena-League team. He became a man of deep faith in God and worked diligently to be a positive role model.

Finally, just one year before his catapult to stardom, Kurt found himself overseas as the starting quarterback for the Amsterdam Admirals in NFL Europe. He led the league in passing yards, completions, and touchdowns. This was enough to earn him a tryout with the St. Louis Rams, which was the shot he had been waiting for his entire life. Kurt survived the final cut and was listed as the third-stringer for the entire 1998 season. However, the Rams went a dismal 4-12, and Kurt only played the final three minutes and thirty-eight seconds of the final quarter in the final game of the season. After the season, Coach Vermeil chose Kurt to be one of the Ram’s five unprotected players who could be selected in the NFL Expansion Draft. But, because Kurt was merely a little-known backup quarterback, no one was interested in him.

Clearly, this story so far has not been the customary prelude for one of the greatest personal seasons in NFL history. Nevertheless, in 1999, Kurt Warner, the man who later would be dubbed “the greatest player never to be drafted,” took the Rams from worst to first in the NFL and was named its Most Valuable Player, all while being paid the league minimum. Their offense was so prolific that it was called “The Greatest Show on Turf,” as they set multiple offensive NFL records. ESPN commentator, Chris Berman called Kurt Warner’s performance that year, “The greatest single-season sports story in history.”

The following year Kurt again was named the NFL’s MVP and later would play in two more Super Bowls (one for the St. Louis Rams and one for the Arizona Cardinals). Even though he narrowly lost those two Super Bowls, he ranks 3rd, 4th and 6th all-time in passing yards by a quarterback in a Super Bowl. In 2008, he was the recipient of the Walter Payton NFL Man of the Year Award for his performance on the field and his character off the field. Kurt also is the only person in history to be inducted into both the Arena Football League Hall of Fame and the NFL Hall of Fame.

Still, we are left with the question that we started with. Who is this guy? Kurt would want you to know that the guy who won the Super Bowl and two NFL MVPs is the same guy who stocked shelves at the Hy-Vee Grocery Store. To him, it’s all about perspective. His story easily could have been one of missed opportunities. But Kurt always kept pushing forward. “It would have been very easy to feel sorry for myself or become bitter or walk away from my dreams,” Kurt wrote in his autobiography (appropriately titled All Things Possible). “But I believed in my talents and kept battling, and I guess that makes it a story worth telling.” This NFL Hall of Famer appreciates that character is something forged in the struggles of life. Kurt believes that, when victories come without struggles, they have little meaning. When success comes too easily, it can result in a shallow individual.

Kurt would describe himself as a Christian who cares deeply about his fellow human beings. He is a family man with strong moral principles. When others would have run away from a divorced mom with a severely disabled child, Kurt jumped in with both feet. When others would have given up after being cut by an NFL team, Kurt found new opportunities to prove himself. He wants his story to be an inspiration to others: “Whatever your situation in life is, I hope my story is of some value to you. No matter how discounted you might be, if you stay true to your principles, believe in yourself and keep working hard, good things eventually happen.”

Kurt Warner is one of the 144 “Wednesday Role Models” featured in the Student Athlete Program. This program is designed to improve the character, leadership and sportsmanship of high school athletes. To learn more about this program and how you can implement it in your school: