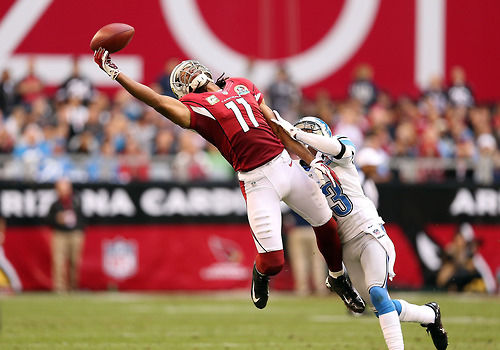 “I really enjoy my philanthropic work, traveling around the world and helping people in need. That’s a lot of fun for me. It’s really rewarding. You’re helping people, but it’s helping you, too. It puts life in perspective.”

Larry Fitzgerald, the Arizona Cardinals wide receiver, has it all. Through his years of hard work on the football field, he has acquired elite athleticism, talent, and fame. Off the field, he is often referred to as humble, authentic and caring. In fact, despite all of Larry’s great fortunes, what has made him most happy in life is helping those in need. Though many professional athletes make great contributions on and off the field, only a select few have taken their off-field performance to the level of Larry Fitzgerald.

Larry Darnell Fitzgerald, Jr., was born on August 31, 1983, in Minneapolis, Minnesota. His father was a highly distinguished sports reporter in the Twin Cities region and so lots of Larry’s childhood was spent on various professional fields. He would accompany his dad and try to assist him in any way he could. Larry, Jr., soon became a fixture on the Minnesota Twins baseball field, where he hung out while his dad set up before games. He also served as a ball boy for the Minnesota Vikings. Nevertheless, Larry never took his privileges for granted. When he wasn’t tagging along with his dad, Larry and his mother would be donating time at different community charities. Larry quickly discovered that he thoroughly enjoyed helping others. Looking back on those days he said,

“Helping others is something that was part of my upbringing, and is woven into the fabric that spans across multiple generations of my family.”

As a youngster, Larry discovered his own talents on the football field and became a high-speed wide receiver. In 2002, he attended the University of Pittsburg where he played for the Pittsburg Panthers football team. During his two-year collegiate career, Larry’s positive attitude made him a pillar of the community and the best football wide receiver in the school’s history. The impact he had on the athletic program and beyond was immeasurable, which is why on July 1, 2013, the university retired his #1 jersey. “In addition to his exceptional football talents, Larry has always been one of the University of Pittsburgh’s finest representatives. As thrilling as he has been as a player, Larry has been even more inspiring off the field for his incredible commitment to philanthropic causes,” announced the athletic director Steve Pederson.

To be clear, Larry is one of the most prolific receivers to ever play the game. He ranks second or third in just about every major career category for a pass-catcher. Most of these records are held by the great Jerry Rice, but Larry is still playing and is gaining ground every year. He has been invited to 11 NFL Pro Bowls and he routinely leads the league in completions and yards. He has spent 15 years with the Arizona Cardinals, led them to their first-ever Super Bowl, and caught two touchdown passes during that game. He also has rewritten every game, season, and career record as the Cardinal’s premier pass-catcher. Whenever he decides to retire, Larry’s next stop undoubtedly will be the Pro Football Hall of Fame. To date, Larry’s hefty catalog of football highlights has made him one of the best NFL receivers of all time and a hero to many.

At the same time, Larry has used his renowned accomplishments between the sidelines as a powerful platform from which to expand his kindhearted endeavors off the field:  “God has blessed me as an athlete with a great platform and you can do a lot of things with a platform. You can make a fool out of yourself and do all the wrong things or you can do some things that are right and try to make a positive impact.”

Larry’s dedication to the welfare of others may be unequaled in sports. As team captain of the Cardinals, he believes that it is imperative to set an example for his team and the next generation. “He’s demonstrated a commitment to our team and our community that is the model for every other member of our organization to follow,” stated Cardinals owner Bill Bidwill. “He not only lends his name and his notoriety to several great causes but is extremely generous financially and especially with his time.”

Larry’s humanitarian investment of his time and resources have spanned a wide range of issues. One of these areas has been education and sport. He wants everyone to have the same opportunities he did. So, to aid as many people as possible, Larry established the “Larry Fitzgerald First Down Fund.” This fund annually donates over $600,000 to encourage reading competence and technology access for K-12 students. Moreover, the Minneapolis Park and Recreation football program, where Larry learned how to play the sport, received 1,000 new shiny helmets on his behalf.

Larry’s mother died of breast cancer when he was a sophomore at Pitt and he therefore has dedicated himself to cancer awareness and support. He created the “Carol Fitzgerald Memorial Fund” to provide support for breast cancer survivors, research, and education. He also served as the league spokesperson for the NFL’s breast cancer awareness initiative called ‘A Crucial Catch’. Larry donates $5,000 for every touchdown and another $1,000 for every reception he catches during the NFL’s National Breast Cancer Awareness Month. NFL Commissioner Roger Goodall says that these efforts are making a difference… “Not just with breast cancer but with a variety of other charities, because that’s the kind of guy he is.”

While Larry has made his mark in America, he has also left footprints in countries most people aren’t willing to visit. He has toured more than 80 countries and not just to connect with our troops overseas. Larry wants to better understand the needs of underprivileged civilians. He has always taken a hands-on approach and he has never refused a challenge. His crusade has improved water systems in Ethiopia, where he helped dig wells and construct irrigation systems. Equally extraordinary, Larry (trained by doctors) has fitted hearing aids for children in several African countries. Remarkably, these examples are only a small sample of his good deeds aboard.

When Larry was asked about his favorite pastime off the field, he responded: “I really enjoy my philanthropic work, traveling around the world and helping people in need. That’s a lot of fun for me. It’s really rewarding. You’re helping people, but it’s helping you, too. It puts life in perspective when you come back and you say, ‘Man, it’s raining again in Minnesota.’ I think when I was in Rwanda and seeing malnourished kids, kids not eating, not having healthy, clean drinking water, things that we take for granted — it puts everything in perspective for you.”

It’s no surprise that Larry’s collection of NFL records and charitable activities have earned him plenty of prestigious honors. One highlight occurred in 2016 when Larry was the co-recipient of the Walter Payton Man of the Year Award. This top tribute salutes a player’s off-the-field charitable service along with his greatness on the field.

Larry Fitzgerald is a great mentor, role model, and family man. He also is determined to make the world a better place. He not only sets the standard for charitable giving for professional athletes but his kindness has touched lives across the globe. He doesn’t wear a cape, but he is a superhero in the eyes of many. When asked how he wants to be remembered in the grand scheme of things, Larry responded by saying, “Just a guy that cared about his fellow man, lived every day like tomorrow wasn’t guaranteed.”

Larry Fitzgerald is one of the 144 “Wednesday Role Models” featured in the Student Athlete Program. This program is designed to improve the character, leadership and sportsmanship of high school athletes. To learn more about this program and how you can implement it in your school: