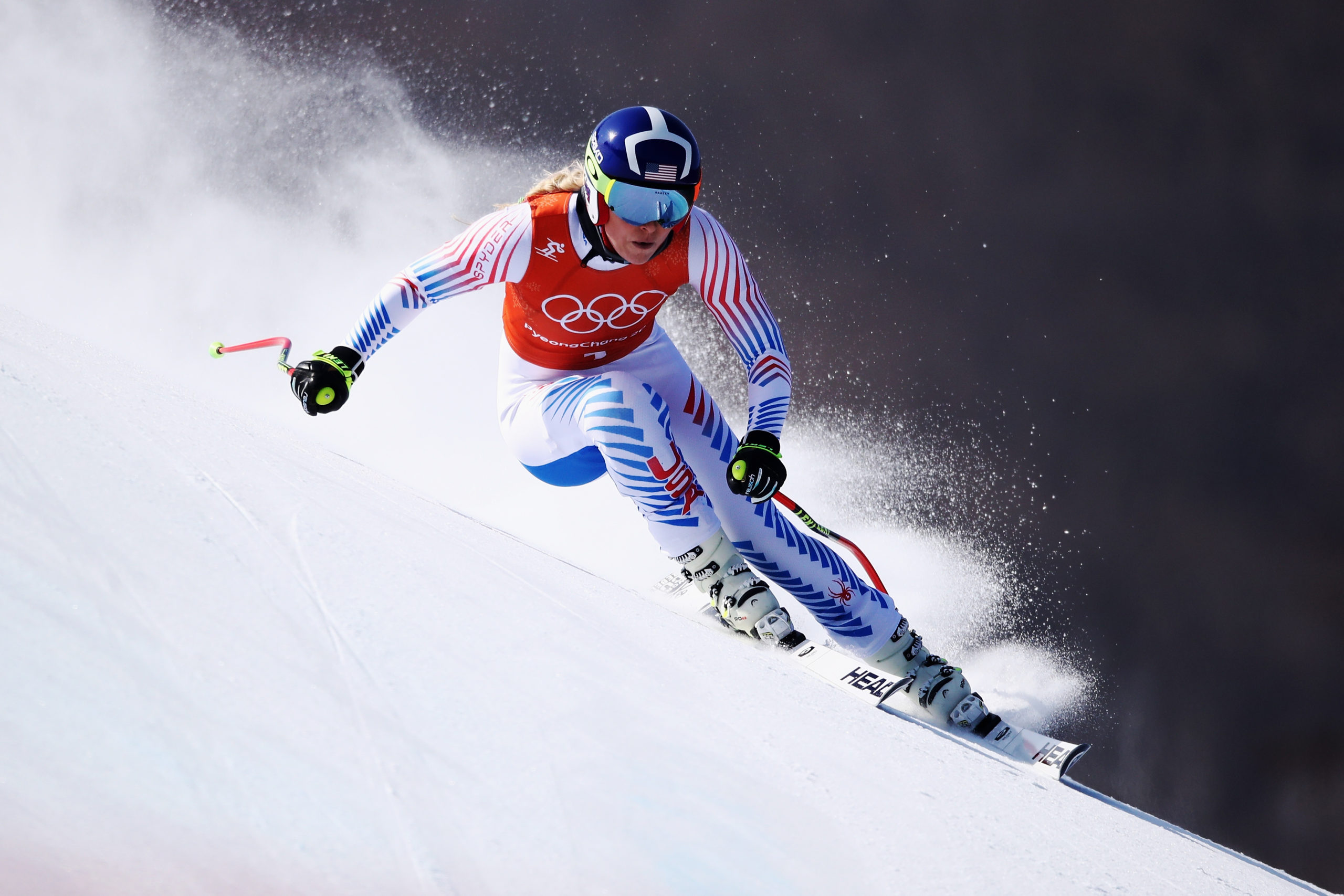 “Follow your dreams. If you have a goal, and you want to achieve it, then work hard and do everything you can to get there, and one day it will come true.”

“I love going fast. I love the adrenaline. That’s why I do it.” These words epitomize Lindsey Vonn. She skis down insane mountains with reckless abandon. She always goes 110% with little regard for her own safety. Lindsey says that fear is just not a part of the equation. Downhill ski racing is a unique sport in which the actual difference between first and 10th place often is a blink of an eye. Lindsey’s career has been defined by her insatiable ability to find those hundredths of a second to become a champion.

Lindsey has dedicated her whole life to skiing. From the age of two, when she tried on her first set of skies, to the ripe old age of 34, when she became the oldest person to win a medal at a world championship, she committed everything she had to the sport of skiing. In between, she won 4 World Cup overall championships, three Olympic medals (one gold), and 82 World Cup races in her career. Lindsey is one of a handful of skiers to win World Cup races in all five disciplines of alpine skiing (downhill, super-G, giant slalom, slalom and super combined). Any objective person would rank her as the most successful American ski racer of all time and arguably the greatest racer, man or woman, to ever put on skis.

Skiing was in Lindsey’s blood. Her grandfather taught her how to ski when she was barely out of diapers. Her father, who won a national junior title before having a career-ending knee injury at the age of 18, was a tremendous help. Both pushed Lindsey to compete at a high level. Lindsey was skiing year-round by age seven and demonstrated a lot of potential. So much so, that her parents decided to move the entire family from Minnesota to Colorado. There, Lindsey could receive the best training to propel her to the next level of skiing. This meant that Lindsey and her siblings left behind the life they always knew, including school, and friends. All four of her siblings skied, but Lindsey was a little more driven than the rest. She later reflected on those early days by saying, “I’ve always said that I want to be number one in ski racing. I want to win gold medals. I want to win titles. The rest of my family wanted to have friends and hang out.” Lindsey always had the type of dedication needed to become an elite skier.

For Lindsey, this investment turned out to be a good one. By the time she was 16, Lindsey made her World Cup debut as a professional. A year later, she made her Olympic debut at the 2002 Salt Lake City games. Her best Olympic result was sixth in the combined event. She was convinced that she could do better. But she recognized that she would have to take her dedication to a whole new level if she were going to compete against the best. “When you’re young, you develop ways to win, and you think they will always work, but then you get to the top, competing against the other top athletes, and sometimes things don’t work.”

So, Lindsey doubled down. As a result, Lindsey soon dominated the sport of skiing like no one else in history. In 2008, she became only the second American woman to win the overall Alpine Skiing World Cup title. She backed it up by defending this title in 2009, 2010 and 2012. It was also during this stretch that she became the first American woman to win a gold medal in the downhill event at the 2010 Olympics. This cemented her legacy as the greatest female American skier of all time. After a devastating injury in 2013, she fought back to win Alpine Skiing World Cup season titles in the downhill division in 2013, 2015, and 2016. In 2016 Lindsey also won the Alpine Skiing World Cup title in the super giant slalom event.

So far our description of Linsey’s dedication has touched on her fearlessness and her unrelenting training. However, perhaps the most impressive aspect of her career has been her ability to bounce back after treacherous injuries. The thing is, the likelihood of sustaining a serious injury in professional skiing is 100%. When skiers are traveling 80 miles an hour down mountains with hairpin turns, it is just a matter of time before a skier takes a bad spill. Broken bones just come with the territory. And yet, as soon as the bones are mended, the competitive skier must strap on her skis and get back on the slopes. Perhaps no one has done this better than Lindsey. After one of her patented wipeouts, a television commentator summed up her courage:

“As a former speed skier, had I taken a fall like that, you wouldn’t see me for a week. Lindsey will be out training this afternoon. Every injury that you have as a speed skier, it steals away your courage, with the exception of Lindsey Vonn. I’ve never seen anything like it.”

When asked to list her injuries, she sounds like someone who has been to war. “My right knee, two ACLs, MCL, meniscus, broken my wrist, my thumb, my pinky, just a couple of random broken bones. Oh, my ankle. I forget. There’s just a lot,” Lindsey recalled. “I’ve got some screws. The first ACL, they took my hamstring. The second one, they took my patella.”  And yet, after every injury, she gets right back on that horse and charges down that mountain at top speed. No fear. No worries.

A perfect example occurred at the 2006 Winter Olympics. Lindsey entered the downhill event as the overwhelming favorite. In the middle of her run, her ski clipped a gate and she went down hard. Her skis flew off and she spun into the orange protective fencing. She had to be airlifted to a hospital and kept overnight. “The crash was terrible,” Lindsey said later. “It was one of the worst crashes I ever had in my life. I thought my back was broken. It really scared me and I thought I would never ski again.” However, to everyone’s amazement, Lindsey competed two days later. Although her 8th place finish was not what she had hoped for, she was given the Olympic Spirit Award for this incredible performance.

Lindsey’s swan song came at the 2018 Olympic Winter Games in South Korea. Her grandfather, the man who taught her to ski, was a veteran of the Korean War. He couldn’t wait to return to South Korea and watch Lindsey compete at those particular Olympic games. Unfortunately, he died a few months before the games began. Therefore, Lindsey decided to spread some of her grandfather’s ashes near the bottom of the downhill race course. That way he could still be there, and part of him would remain in Korea forever. As it all turned out, Lindsey secured a bronze medal in the women’s downhill event and she dedicated her Olympic performance to her grandfather:

“Our family never gives up and I never gave up. I kept working hard and I’m really proud of this medal and I know he (her grandfather) is too.”

Lindsey has always loved the sport of skiing. However, injuries and surgeries had reached a point where further competition was not possible. Her family had been begging her to retire and Lindsey finally had to accept the truth of their advice. “My body is screaming at me to stop and it’s time for me to listen.” So, early in the 2019 season, she announced that she would retire after the season. Her final performance at the World Championships was quintessential Lindsey. In the super-G, the only thing she would earn was a black eye, after she crashed hard in turn five. However, a few short days later, in her final downhill event, Lindsey secured a bronze medal. In so doing, she became the oldest woman to medal at the World Championships.

When Lindsey first entered serious competition as a teenager, she began writing down her goals. At that time those goals might have seemed like far-fetched dreams. However, as Lindsey went through her career, she continued to cross off those goals one by one. US Alpine Director Patrick Riml attributes Lindsey’s remarkable run over the years to her intense dedication to be the best. As he said, “Her determination, her drive to become better, to win more races, it’s unbelievable.” At age 34, this chapter comes to a close, but it will be interesting to see what this driven individual accomplishes in her next chapters.

Lindsey Vonn is one of the 144 “Wednesday Role Models” featured in the Student Athlete Program. This program is designed to improve the character, leadership and sportsmanship of high school athletes. To learn more about this program and how you can implement it in your school: