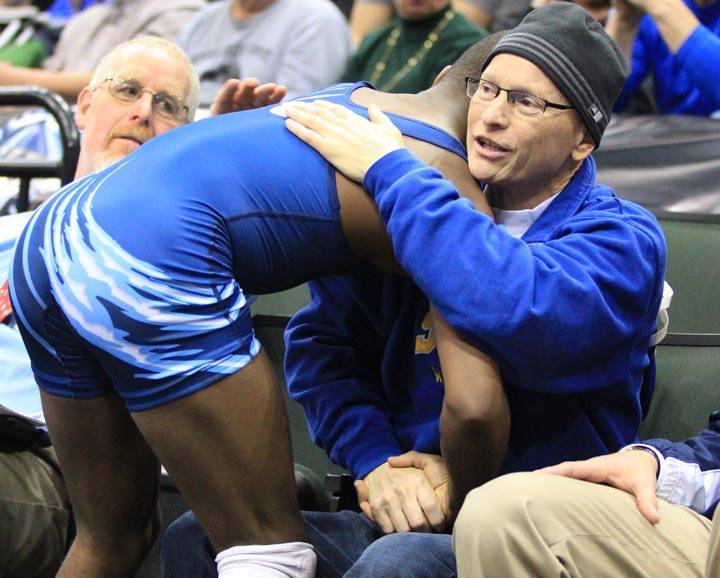 “When you go out there, you want to win, but if you don’t win, you have got to be a good sport and you be polite. That’s the biggest part.”

On March 1, 2014, the Minnesota State High School Wrestling Championships took place in front of thousands at the Xcel Energy Center. Fans poured into the arena. They were eager to watch the talented wrestlers compete in the biggest match so far in their lives. Malik Stewart was in the group of state finalists. He was a sophomore from Blaine High School and like all of the other state finalists he got there by an outstanding record in regional meets. Like them, he earned his outstanding record because he had physical power, speed, technical skill, mental toughness, and endurance. In short, Malik had paid his dues and was very, very good. Nevertheless, what caught the people’s attention that day wasn’t Malik’s great wrestling ability. It was his sportsmanship.

Like his fellow competitors, being in the state finals was the capstone of a sport begun early and a lifetime of sacrifice and work thereafter. Like many other role models you have been reading about, Malik’s sports career was motivated and shaped by an early tragedy. His dad died of a heart attack when Malik was seven years old and, as you might expect, he sought refuge from his anguish in sports  —  more specifically, in wrestling. Initially, wrestling was a good distraction from his emotional pain, but over time it became much more than that. Malik wanted his dad to be proud of him, and wrestling became Malik’s full-fledged passion. Over time he became determined to prosper at the highest level and he carried this determination into his high school wrestling career. “He wants to be elite,” said his coach, Josh Prokosch.“He’s always looking for the best way to do something. Seeking advice from coaches, from other wrestlers, from alumni that we have come in.” Consequently, in only his second high school season, Malik Stewart made it to the state finals.

When the tournament weekend finally arrived, Malik was both nervous and excited as he and his fellow wrestlers entered the stadium. He was only ranked third in his 120-pound weight class. Nevertheless, he stayed focused and was ready to compete for the title. As the matches got underway, Malik began to shake up the tournament lineup. With his adrenaline flowing and his team cheering wildly, Malik grappled his way to the championship match. This amazing feat for such a young man put him face to face with the number 1 seed, Mitchell McKee.

Now, as it turned out, Malik and Mitchell had more than just wresting in common. Mitchell was also a sophomore and he too was wrestling for a higher purpose. He and his father, Steve McKee, shared a love for the sport and had closely bonded throughout Mitchell’s wrestling journey. But sadly, Steve was battling terminal cancer and his family had come to the realization that he didn’t have much time left. Mitchell wanted his father’s last days to be filled with the things they loved, so he made it his mission to win the state championship title. Mitchell was a fighter, just like his dad, and together their dreams came true when he qualified for the championship match.

The stage was set and all eyes were on the center of the mat, where both Malik and Mitchell stood proud. To say this was one of the biggest moments of their lives thus far would be an understatement. Once the first whistle blew, the wrestling fans rose to their feet and the moment of truth began. Ironically, although it had taken years for both boys to get to this level, the match was over in less than two minutes. Mitchell used a hip toss and an arm bar technique to successfully pin Malik for the title.

This was a breathtaking win for Mitchell, but of course, it was an extremely tough loss for Malik. He had put in such an effort that nobody would have been surprised if he expressed some anger or frustration after his defeat. But that’s not what happened at all. Instead, Malik picked himself up off of the mat and shook hands with and hugged Mitchell. “I went through the same thing when I was younger… so I know what he is going through,” Malik explained. Next, he shook hands with Mitchell’s coaches. But then Malik did something that amazed the entire crowd. He ran across the stadium in an unknown direction — even his coach and mother were confused by what was happening — and shook Steve McKee’s hand and hugged him as well.

“He won,” Malik said of Mitchell. “He was pretty proud, and his dad was pretty proud. So, I went over there and I shook his hand, embraced him a little bit, and told him to stay strong and everybody loves him.” Mitchell couldn’t help but pause from celebration to acknowledge Malik’s genuine acts of kindness: “It was a big match for him and to be able to hug my dad like that and not storm off like a lot of kids do… really respectful.”

Needless to say, the audience erupted into applause, and tears of compassion streamed down many faces. In that quick moment, Malik had become a winner too. “I got a little teary because I lost the match (but) I know the hard times he was going through. The crowd went wild and I heard a couple of people say after I did it — that was pretty classy — but I just did it straight from the heart.”

Malik’s selflessness, poise, and respect had a profound effect on everyone. The spectators had just witnessed something much more powerful than wrestling. In fact, Malik’s extraordinary behavior inspired a middle school wrestling coach to write a letter to Malik’s school district. The letter stated:

“The whole crowd gave a standing ovation, not just for Mitchell and his father, but for Stewart, who understands what true sportsmanship is. Thank you for making your athletes into what they are today. Mr. Stewart is a model wrestler that we can all use in our examples of what a true athlete is.”

Malik’s Coach Josh also was incredibly proud of Malik’s maturity. He observed that he had never seen anything like it in all his years of wrestling: “You see kids, they lose and throw their headgear, they sit and pout. First thoughts through Malik’s mind are to congratulate Mitchell, congratulate the coach, and shake the dad’s hand. So that was fantastic. For a sophomore in high school, he can see a lot of the big picture which is pretty rare nowadays.”

News of Malik’s unique display of sportsmanship filtered quickly from the arena to the public. Local and national media outlets, such as The Today Show and ABC News, picked up on the heartwarming story. Furthermore, Malik was honored at the 2014 Musial Awards. This is an event that recognizes the year’s finest moments of sportsmanship and the biggest names in sports who exemplify both class and character. The mission of the Musial Awards is to “encourage kindness, integrity and civility in sports and society — and to inspire people across the nation to be good sports.” Without question, Malik fit their bill perfectly.

Malik has set a standard for all athletes to follow. His outstanding demonstration of sportsmanship is a great reminder that morality and humanity are crucial components of competition. As Malik said, “When you go out there, you want to win, but if you don’t win, you have got to be a good sport and you be polite. That’s the biggest part.”

Malik Stewart is one of the 144 “Wednesday Role Models” featured in the Student Athlete Program. This program is designed to improve the character, leadership and sportsmanship of high school athletes. To learn more about this program and how you can implement it in your school: