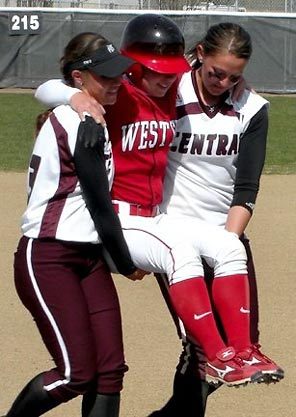 “It didn’t feel like it was a decision. It just felt like the right thing to do.”

On April 26, 2008, Central Washington University hosted a double header in women’s softball against its rival, Western Oregon University. It was late in the season and both teams were competing to win the Great Northwest Athletic Conference Championship. In the 2nd inning of the second game, Sara Tucholsky stepped up to the plate with two Western Oregon teammates on base. This was a big moment for Sara. She was in the midst of a season-long slump, going 4 for 34 during her senior year. Sara just wanted to get on base any way she could and advance the runners.

On the first pitch, Sara took a called-strike. On the next pitch, Sara’s bat connected hard with the ball. “I hit that pitch and it just went,” Sara would later recall. “I knew it was out.” She hammered it over the center field fence for a 3-run home run. Sara was ecstatic. She had never hit a home run – not at any level. Her 5’2” frame was just not built for power-hitting. In her excitement, she ran right past first base. Her first-base coach yelled at her to come back to touch first base. When Sara made the 180-degree pivot back to first base, she felt a crack. She immediately fell to the ground in agony. The pain was intense and she wailed in pain. She managed to crawl back to first base and there is where she remained.

The umpire, Jacob McChesney, looked down at Sara hugging first base and thought to himself, “What on earth are we going to do.” At that moment, Sara’s head coach, Pam Knox, arrived on the scene. She understood, that by rule, if she or any other member of the team assisted Sara, she would immediately be called out. Coach Knox turned to the umpire and asked, “What is the ruling if I put somebody in for Sara?” The umpire stated that Sara’s hit would be ruled a 2-run single and the pinch-runner would remain on first base. Even though Coach Knox didn’t want to take away Sara’s only home run of her career, she did not see another option.

Just as Coach Knox began to communicate her decision to insert a pinch runner, she heard an unfamiliar voice. “Excuse me, would it be okay if we carried her around and she touched each bag?'” The person asking the question was Mallory Holtman, the woman playing first base for Central Washington, the opposing team. The umpire looked at Mallory with a puzzled look on his face, yet he clearly understood that this action was permissible. After a nod of approval, Mallory and fellow teammate, Liz Wallace, walked over to Sara, who was still clutching first base.

“Is it okay if we pick you up and carry you around the bases?” Liz asked. The response was a resounding, “Yes, thank you.” Mallory looked Sara in the eye and said, “You hit the ball over the fence. You deserve it.” So, Mallory and Liz gently picked up Sara and carried her around the bases, slightly dipping at each base to allow Mallory to touch each base with her left foot. Once the crowd understood what was happening, fans from both sides stood and applauded this act of sportsmanship.

When Sara touched home plate, Mallory and Liz handed Sara off to her own teammates, who helped her back to the bench. This was Sara’s last at bat as a collegiate softball player. Sara would never play college softball again. An MRI on Monday would indicate that Sara had torn her Anterior Cruciate Ligament (ACL), ending her senior year and her career. Sara’s team, Western Oregon, went on to win that decisive game by a score of 4-2. They also went on to clinch the conference title and qualify for the Division II playoffs. Later, when asked if they regretted their decision, Mallory and Liz responded in unison, “Absolutely not. Not at all.”

At the time, it didn’t seem like that big of a deal. No one on either team thought this simple gesture of sportsmanship would go beyond the confines of this field and the 100 fans in the stands. As Mallory said, “Granted, I thought of it, but everyone else in my position would have done it too.” Maybe, maybe not. The coaches from both teams seemed very impressed by what they saw that day. Coach Knox commented, “It’s a great moment when someone has the character to step up to do the right thing at the right time.” Mallory’s head coach, Gary Frederick, was equally impressed, simply saying, “It’s emotional. You’re proud to be associated with those kids.”

The public was equally enthralled by the actions of Mallory Holtman and Liz Wallace. The story had legs. After a few days in the local media, ESPN reported on the story. The following weeks and months were hectic. The three ballplayers appeared on Inside Edition, The Early Show, ESPN SportsCenter, and the Ellen DeGeneres Show. Ellen rewarded them all by sending them to a resort in Florida to relax and reminisce. The group continued to travel. They were invited to sit on the field during the 2008 MLB home run derby. During the ESPY Awards, all three were honored with the Best Moment in Sports ESPY Award for 2008.

Life has moved on since that day, but the lessons from that day remain. In 2012, Coach Frederick decided to step down and encouraged Mallory to apply for his head coaching position. Mallory was hired even though she was competing against 30 qualified applicants. One of the reasons undoubtedly had to do with her character. She noted, “Being nice matters and I think sometimes our society forgets that.” Universities want coaches who will win, but they also want coaches who will instill character, sportsmanship and leadership. My guess is that the Central Washington University athletic department could vouch for her character.

Mallory has consistently made similar comments about that day, “It didn’t feel like a decision. It just felt like the right thing to do.” Each and every one of you will be faced with similar ethical decisions at different times in your lives. Maybe it will be on the athletic field, maybe it will be in business and maybe it will be in a marriage. I hope this story demonstrates that good things happen when you make the right decisions.

Mallory Holtman is one of the 144 “Wednesday Role Models” featured in the Student Athlete Program. This program is designed to improve the character, leadership and sportsmanship of high school athletes. To learn more about this program and how you can implement it in your school: