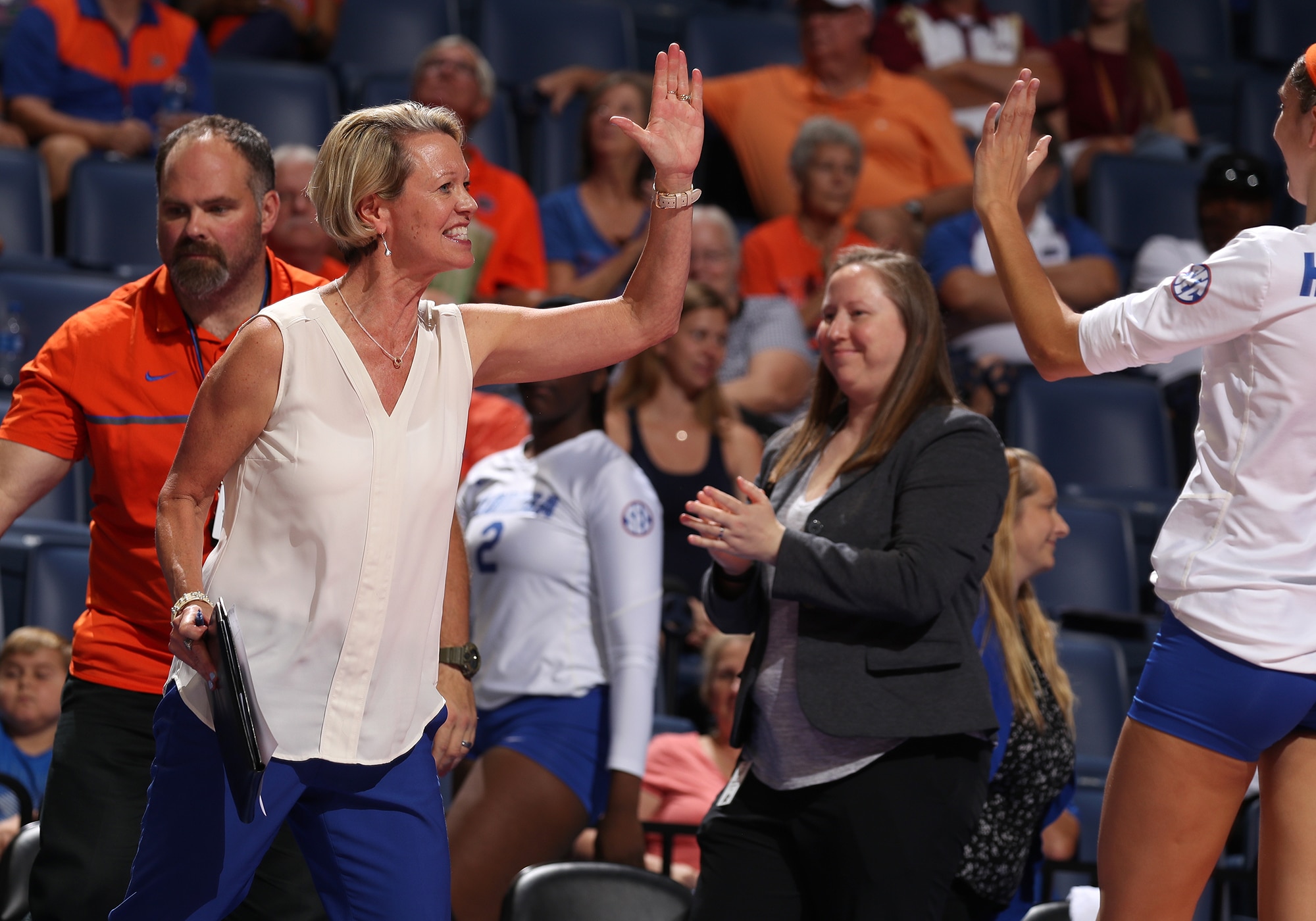 “I think in coaching it’s easy to get caught up in the numbers — the win/loss percentage. But, if that’s all you think about then you lose the opportunity to understand the most important thing, which is the relationships.”

Coach Mary Wise is the head coach of the women’s volleyball team at the University of Florida. Her record for the past 31 years speaks for itself. She has had 30 consecutive winning seasons on her way to 1,001 career victories – and counting. Her winning percentage hovers right at 90%. Her teams have won 24 Southeastern Conference (SEC) Championships and have played in 8 NCAA final fours. Former player, Caroline Knop probably said it best:

“Coach Wise is the pinnacle of female coaches in the game.”

However, Coach Wise very rarely speaks about statistics and records. When she is asked about her legacy, she speaks about the accomplishments of former players after they leave her program. She has an open door policy, so when a former player returns, she immediately stops practice to introduce her to the current players. They laugh, tell stories and reminisce. “The relationships that are built through the recruiting and the four years that they play is nothing compared to the relationships that you can keep long after they have graduated,” said Coach Wise. “That really is the best part of this job.”

Make no mistake about it, Coach Wise is as tough as they come. When asked to describe her, most people in her life say, “competitive,” “fiery,” and “passionate.” She absolutely hates to lose and this focus permeates down to every member of her staff and players. She motivates her players to play to the highest level and then to somehow find the next level. As Coach Wise says:

“My leadership philosophy is to help every player find and to hone their superpower.”

And yet, when she holds a team meeting, everyone refers to it as a “family meeting.” According to assistant coach, Matt DeLancey, “It truly is a family.”  Former player, Carlie Snyder said, “I sometimes forget that she is the winningest female head coach because she really does care about us as people and wants us to grow over our careers. I always know that it’s okay to come into her office and talk about anything, even if has nothing to do with volleyball. I’m really lucky to have that home away from home.”

Mary Wise was not always known as Coach Wise, even though it must feel that way. After all, she is entering her 40th year as a coach. At some point, she was just Mary, one of six children growing up in Evanston, Illinois. She had four older brothers and so she learned to be competitive. She had to fight for everything — the last piece of dessert or the ball in pick-up games of driveway basketball. Although atypical of girls in the 1960s, Mary’s parents also encouraged her to be just as involved in sports as her brothers. So Mary was always playing sports with the other kids in her neighborhood. “This was long before there were organized leagues, travel teams, or specialization in sports,” recalled Mary. “No one ever played just one sport.” You name it, she played it.

By the time, she got to high school, Mary could only play three sports; one per season. In the spring, she played softball and in the winter she played basketball. She needed a fall sport, so she chose volleyball. Mary admits that she was never a world-class athlete, but she had just enough athleticism to be good at every sport. And her best sport was volleyball. As it just so happens, coaches from Purdue University were recruiting an all-American from the area who ended up signing with the University of Southern California. This left one scholarship open at Purdue. Mary said, “It was just a matter of being in the right place at the right time.” Mary became a dean’s list student, a standout setter and, as such, led Purdue to two Big Ten conference championships.

That could have been the end of her athletic story, but at the age of 21, something happened that would never happen today. Mary became the youngest Division I head volleyball coach in the nation. In 1981 Iowa State University decided to take a chance on this young passionate woman. She admits that she was “underqualified and overwhelmed,” but she also was driven and committed. She also was humble enough to know that she didn’t have all the answers. This left her curious and eager to improve. In those days, she had limited staff and limited resources. So Mary felt that she had to do anything and everything to become a true leader of that team. She was often the one driving the team van to the games.

After four years at Iowa State and another five years at the University of Kentucky, Mary was offered the head job at the University of Florida in 1991. Coach Wise immediately turned Florida into a national powerhouse. Prior to her arrival, Florida had three winning seasons, one NCAA appearance, zero SEC championships, and zero all-American players. Since her arrival, she has overseen 30 winning seasons, 30 NCAA appearances, 24 SEC championships (18 consecutive championships), and her players have received 117 all-American honors.

Coach Wise has no plans to call it quits anytime soon. The competitive fires still burn brightly in this coach. Florida volleyball play-by-play announcer, Tom Collett confirmed this belief when he said, “She still has that same passion, that same drive, that same focus and that same intensity going into every match today as she did when I first met her.”

After an extensive conversation with Coach Wise, one gets the overwhelming feeling that she will not view her career as a failure if she doesn’t win a national championship. “I think in coaching it’s easy to get caught up in the numbers — the win/loss percentage. But, if that’s all you think about then you lose the opportunity to understand the most important thing, which is the relationships.” While other coaches spend countless hours watching game film or planning the x’s and o’s, this leader believes her time is better spent on connecting with players and building trust.

She reminds us all: “The answers are always in relationships.”

Coach Wise’s impact is captured by current and former players who spent years under her tutelage. Former player, Caroline Knop said, “She is not just a coach for us, she truly is a mentor. She cares about our well-being, about creating strong independent women who are going to be successful after their four years at Florida. That is a testament to who she is as a person and her character.” Current player, Carli Snyder, added, “I do feel so excited to play for someone who genuinely values the type of person you are when you leave her program.” Perhaps the best compliment came from another player, Simone Antwi, who expressed her desire to pass on the torch: “I just hope that later on in my life I can have this impact on a girl — be a strong role model for her too.”

Leaders in all industries read countless books on leadership, looking for that gold nugget to improve productivity. And here is Coach Mary Wise teaching us that perhaps there isn’t anything new under the sun on leadership. Quite possibly Coach Wise has given us a simple blueprint to follow. Maybe leadership is simply caring about people and helping them shine. Mary’s life shows us that the most successful outcome of leadership should be measured by the impact one can have on the lives of others.

May Wise is one of the 144 “Wednesday Role Models” featured in the Student Athlete Program. This program is designed to improve the character, leadership and sportsmanship of high school athletes. To learn more about this program and how you can implement it in your school: