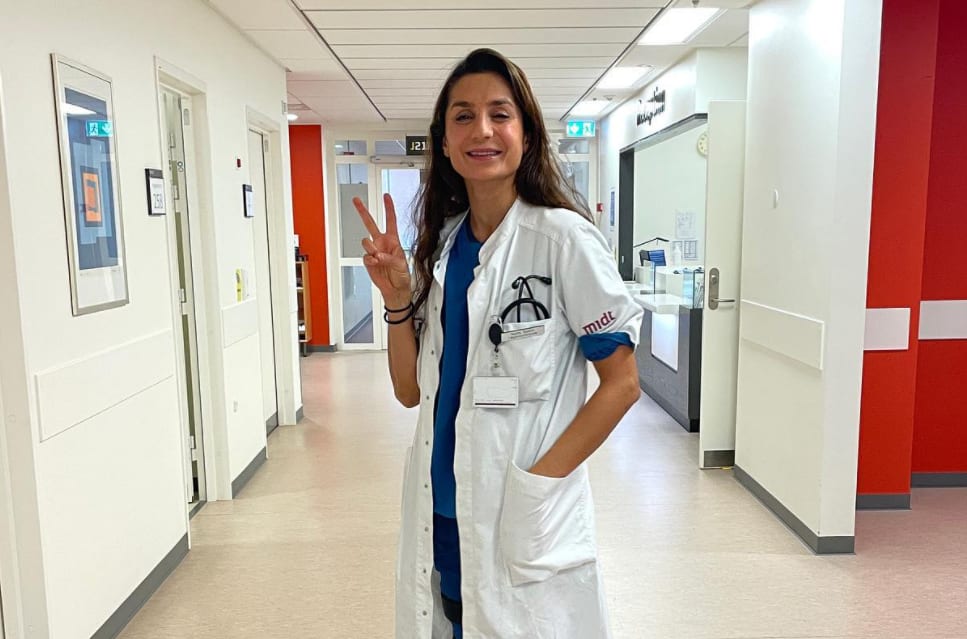 “The worst thing is not knowing what the future is going to bring. Not knowing if I’m going to live or not. That uncertainty is the worst part of the journey.”

When Nadia Nadim speaks about her fond memories of her early years with her close-knit family, you might guess she is from any small town in America. She had four sisters, a loving mother, and a doting father. However, Nadia in fact was born in Afghanistan and her father was a general in the Afghan Army. And, at the age of 10, her pleasant memories suddenly stopped one day in 1998 — when her father was brutally executed by the Taliban.

Nadia’s life would never be the same. Not only did she lose her father, but she also lost any semblance of a peaceful home. When the Taliban took over, they imposed Islam’s Sharia Law. A woman was not allowed to leave the house without a man by her side. School was outlawed for young girls and work was banned for any female. Worse, the Taliban brought violence, murder and chaos to her country. Nadia has described this era of her life as “hell on earth… a place where dreams were not allowed.”

It was certainly not a time or a place to raise a family. So, in a desperate move, Nadia’s mother sold everything to pay a human smuggler to sneak the entire family out of the country. The first step was to evade the watchful eyes of the Taliban. This involved five females being stuffed in the back of a truck in the dead of the night. Nadia may have been too young to fully understand what was happening or where she was headed, but she did recognize that it was a life-or-death situation. “The worst thing is not knowing what the future is going to bring,” Nadia recalled. “Not knowing if I’m going to live or not. That uncertainty is the worst part of the journey. If you knew you were going to die — fair enough — but you don’t know. Am I going to die tomorrow, or will it be something worse than that? I think that’s the worst part of being a refugee.”

The family’s first stop was Pakistan. From there, they caught a flight to Italy. The final leg of the journey ended in a refugee camp in Denmark. For the next eight months the entire family lived in a tent and was dependent upon others to provide food, water, and clothes. They had zero money and limited freedom, but it was 100% better than living under Taliban rule. They were allowed to dream again. “When you have nothing, you still have your dreams and hopes because that’s something that no one can take from you and it doesn’t really cost anything,” said an emphatic Nadia. “Anyone, everywhere, at any time, can have those two things.”

Right next to the refugee camp was a field where members of a female football (soccer) club trained. Through the chain link fence, Nadia watched the girls play football for hours on end. She watched in amazement. Nadia and her sisters had never imagined that girls could play sports. It was like watching the impossible become possible before her very eyes.

Nadia desperately wanted to play this game, yet she fully understood that she needed a football. She was also astute enough to notice that some balls that were shot over the goal into the bushes were not retrieved by the team. So, she gathered her sisters and her friends from the refugee camp to go on a scavenger hunt. When they returned, the girls had scratches all over their bodies from the thorny bushes. But they also had retrieved 23 balls. Despite their desire to keep the balls for themselves, the girls decided to return them to the team manager the following afternoon. In return, the manager allowed the girls to keep several of those balls for their personal use.

This is where Nadia’s dream began. She and her friends did not know the rules of football, but they spent their days imitating the girls on the field. Nadia learned to dribble the ball over 100 times without allowing the ball to hit the ground, and later she learned to “bend the ball like Beckham.” Hour after hour was spent on that dusty lot with imaginary goals and made-up rules.

When the family was granted political asylum, her mother moved the family into a community-based apartment. She took on three jobs to help stabilize her family while all five girls went to school. After school, Nadia practiced football every day. Subsequently, from 2005-2015, she learned the basics on club teams in Denmark. She then signed a major contract with the American-based NWSL Soccer League in New Jersey, and later played for the Portland Thorns. In 2018, she took her talents back to Europe to star for Manchester City in England and then for Paris Saint-Germain in France.

At every step of the way, Nadia became a star player. From the very beginning she played football with great intensity and, as a forward or striker, she often led the team in goals scored. For Nadia it was as if every game were a celebration of what she had overcome. Teammate Dagny Brynjarsdottir said, “You can sometimes tell when Nadia is playing, what she has been through — just so much passion, she works so hard and gives everything.” Mark Parsons, her head coach in Portland, agreed: “She brings everything. She wants to do the work. She wants to do the work early, get ahead and stay ahead. She has fire and determination that is never ending.”

Perhaps the best testament to Nadia’s skills as a footballer has been her extended playing career with the Danish National Team. She has played in 99 games for her adoptive country from 2009-2022. The irony is that it almost didn’t happen. In fact, her acceptance to the team was initially declined. Due to her political asylum situation, she could not apply for citizenship until she was 18. Next, FIFA, the international governing body of women’s football, initially declined her application to join the Dutch National Team. FIFA cited an archaic rule about a 5-year residency in a country after receiving citizenship. However, Nadia refused to take “no” for an answer. She appeared before the FIFA board and told her life story. After that appearance, FIFA granted her immediate acceptance to the National Team. No one could say no to that heartfelt story.

In addition to her impressive football career, Nadia has learned to speak nine languages fluently. If that weren’t enough, she became a doctor in 2022 after attending medical school for 10 long years. During each football season, she would practice and train six hours a day and then attend medical school remotely each evening. In the off-season, she would return to Denmark and attend Aarhus University in person. So, when her football career ends, Nadia will fulfill her goal of becoming a surgeon.

It seems Nadia has always known what she wanted to do with her life. “Whatever time I have, I want to change the world,” she stated. She has always remembered the compassion that others showed her in her journey, and she now wants to pay it forward. She also remembers those little girls in Afghanistan who didn’t get out and who are still living under the Taliban. She desperately wants them to feel the freedom and joy that she has enjoyed since leaving at the age of ten. When asked to reflect on the current situation in Afghanistan, Nadia feels pessimistic and sad. “Breaks my heart thinking about the future for girls and women in the country. Right now I don’t see a future,” she said with a heavy heart. “You can’t let cavemen run the country and expect it to be a modern country where there is progress and women have human rights. I don’t see it. They are going to do a lot of harm and ruin future generations.”

The final chapters of Nadia’s story have not been written. After all, she is just a young woman. However, we know that she has a strong desire to give back to humanity and change the world. As the author, I hope Nadia’s story can help inspire you to find the courage inside yourself to pursue your dreams. I also hope that this story reminds you of the immense individual rights and freedoms that we all enjoy in America.

Nadia is one of the 144 “Wednesday Role Models” featured in the Student Athlete Program. This program is designed to improve the character, leadership and sportsmanship of high school athletes. To learn more about this program and how you can implement it in your school: