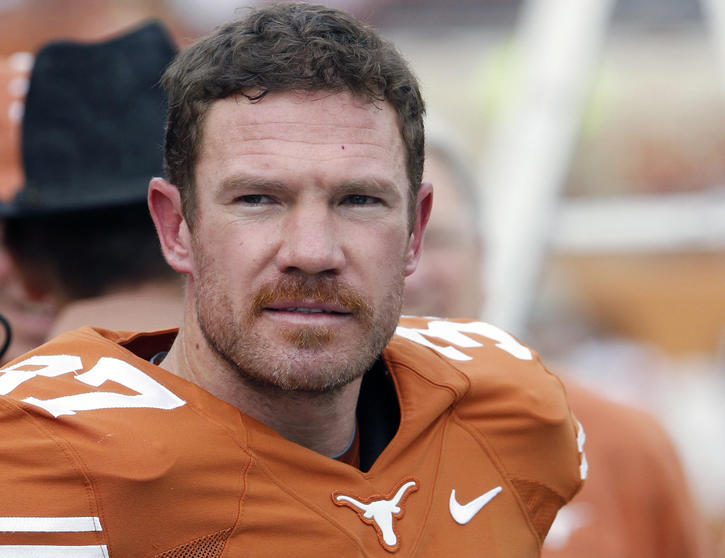 “A lot of people have these dreams, a lot of the time they’re just fleeting. The fact that I focus all of my energy into making them happen is why it happens.”

High school came easy to Nate Boyer. He grew up in a middle-class family just outside of Oakland, California. He graduated from Valley Christian High School in 1999 without a plan. His mother described him as an “average kid.” Nate described himself as “rudderless.” His only plan was to “get the hell” out of his protected town of Pleasanton. He wanted to make it on his own. Without the slightest bit of help from his parents, he moved out.

For the next several years, Boyer lived a meager existence. He briefly enrolled at Mesa Community College in San Diego. He then found himself homeless in Los Angeles. He lived in an old Honda Civic Hatchback. He slept in Griffith Park. He showered at the Hollywood YMCA and he scavenged food from restaurants on the Sunset Strip. He worked a lot of odd jobs. His life was meaningless and he positively impacted no one.

Then, on September 11, 2001, Boyer finally woke up. As he watched the World Trade Center Twin Towers fall, he felt crazed by the meaningless destruction and thousands of deaths. Not only was the world an unsafe place, but his own life had no meaning. If he had been obliterated in that obscene mass murder, it would have been of no consequence. He had no goals, no mission and no one relied on him. In that moment of dismal clarity, Boyer decided he had to change his life and give it some meaning.

In that fertile mood, Boyer came across a Time Magazine article about the genocide of the people in Sudan, a war-torn country on the continent of Africa. For some reason, the words and pictures moved Nate to action. “Maybe I just allowed myself to be affected by it for once instead of just looking at it as a photograph. I thought about the actual people.” Nate said. “Something inside was telling me ‘You have to go over there. You have to help these people somehow.’”

He scraped together all the money he had to buy a plane ticket to N’Djamena, the capital of Chad. He next tried to talk his way onto a United Nations flight by claiming to be a doctor. That didn’t work and while he was being reprimanded, Boyer insistently argued: “Look, I just want to help. I’ll do anything. Let me volunteer.” And so it happened. Boyer delivered food and moved medical equipment. He held hands with the children and cried with them.  This experience further opened his eyes and heart. “That was the first time that I had really been around death – and you’re right there,” Nate recalled. “The men are dead or out fighting. The women, almost all of them had been raped. Some of these kids are missing limbs and are just maimed in the face. At the same time, they are smiling and playing, they are just happy.”

It was only two months of his life, but those experiences in Darfur changed Boyer’s soul. He finally had found a purpose for himself and a clear course of action. He set about finding a way to give more of himself. He was intrigued by the Army, particularly the special forces. Boyer observed, “The special forces’ motto is De oppresso liber, which means ‘free the oppressed’. That alone spoke to me because this is what I want to do. I want to fight for those who can’t fight for themselves.” So, at the age of 24, he joined the Army and entered a special-forces training program to become a Green Beret, one of the most elite fighting forces known to man. Of the 145 individuals who began this training program, only 11 became a Green Beret. Nate Boyer was one of those 11.

For the next 5 years, Nate served his country proudly. He was a part of numerous deployments to places like Iraq and Afghanistan. His platoon was responsible for eliminating the number 2 and 3 most wanted men in Afghanistan. While many of his missions remain top-secret, we know that Boyer earned a Bronze Star for his actions in battle. Nate was honorably discharged from the Army. It didn’t take long for Nate to look for his next life challenge.

Boyer was 29 and he enrolled as a college freshman at the University of Texas. Despite never playing a down of organized football in his life, he tried out for and made the team as a walk-on. Boyer was red-shirted his freshman year and then played sparingly the next year. He met with the head coach, Mack Brown to ask how he could play more. Mack Brown told Boyer that he just wasn’t good enough to play substantial minutes at an elite college program.

This answer wasn’t good enough. A few days later, Boyer once again entered Coach Brown’s office and said, “You’re losing your first and second team deep-snappers. I can do that Coach. I’m going to take a ball with me to Afghanistan and I’m going to practice every day and I’ll come back as your deep snapper.” Coach Brown’s response was, “Come on Nate, that’s not gonna work.” Coach Brown underestimated Nate’s drive to learn and didn’t fully understand how coachable he was.

While on Boyer’s so-called annual “summer internship” with the Army reserves, he watched YouTube videos and researched the position. Every chance he got, he practiced. When he returned to the team, he tried out for the position of long-snapper on punts and field goals. “What’s amazing to me is a guy who had never thought about deep-snapping, never talked to a deep-snapper, never looked at deep-snapping, never been involved in the kicking game – in a 2-month period could come back and be as good as he was, Coach Brown said. “It was really fantastic.” Boyer started as the Longhorn deep-snapper for the next three years, and according to all accounts, never missed on any of his five hundred plus snaps. Not once.

Boyer brought so much more to the team than quality snaps. His coach relayed the following story. “We’d be in the middle of two-a-days and they’d be griping about too much practice and how hot it was in Austin, TX. So, I would say, ‘Nate come here, tell them about sitting in a fox hole when it’s 117 degrees with 50 pounds of armor and a helmet on with people shooting at you.’ And he would get up and say, ‘You guys are clueless, oh my gosh, quit being babies.’” Nate became a positive role model and a team leader.

Boyer was given a special responsibility on the team. When the team ran out of the tunnel, Nate would carry the American flag. He did this every game for five straight years. This was an honor that Nate will always treasure. “I love my country and I love what the flag means to me and what it represents”, Nate says. “I would love more than anything for everyone to feel that pride of country that I feel.”

Never one to back down from a challenge, Nate decided to try out for the NFL in 2015. When most NFL players are retiring, this 5-foot, 10-inch 220-pound free agent became a bonafide long-shot. Boyer asked Coach Brown to talk to a few scouts about his chances and each scout said the same thing, “too old,” “too small” and “too slow”. Nate then told his coach, “That’s what I figured, but you know I’m going to make the team anyway.”

Boyer went undrafted, but became the oldest rookie ever signed when the Seattle Seahawks picked up his rights. In his one and only game, Boyer led the Seahawks onto the field and carried the American flag.  He accurately deep-snapped punts and field goals. He even recorded one tackle. Unfortunately, he was cut by the Seahawks. Nate has not been signed by another team.

If you think being cut from an NFL team has Boyer sulking in a corner, think again. “The one thing that I want people to know is that I’m never gonna quit,” Boyer exclaims. “There’s just no way that you’re ever going to break me.” At the age of 35, Boyer is looking for another opportunity to make a difference in this life. While I cannot tell you when, where or how, I would not bet against Nate Boyer. Would you?

Nate Boyer is one of the 144 “Wednesday Role Models” featured in the Student Athlete Program. This program is designed to improve the character, leadership and sportsmanship of high school athletes. To learn more about this program and how you can implement it in your school: