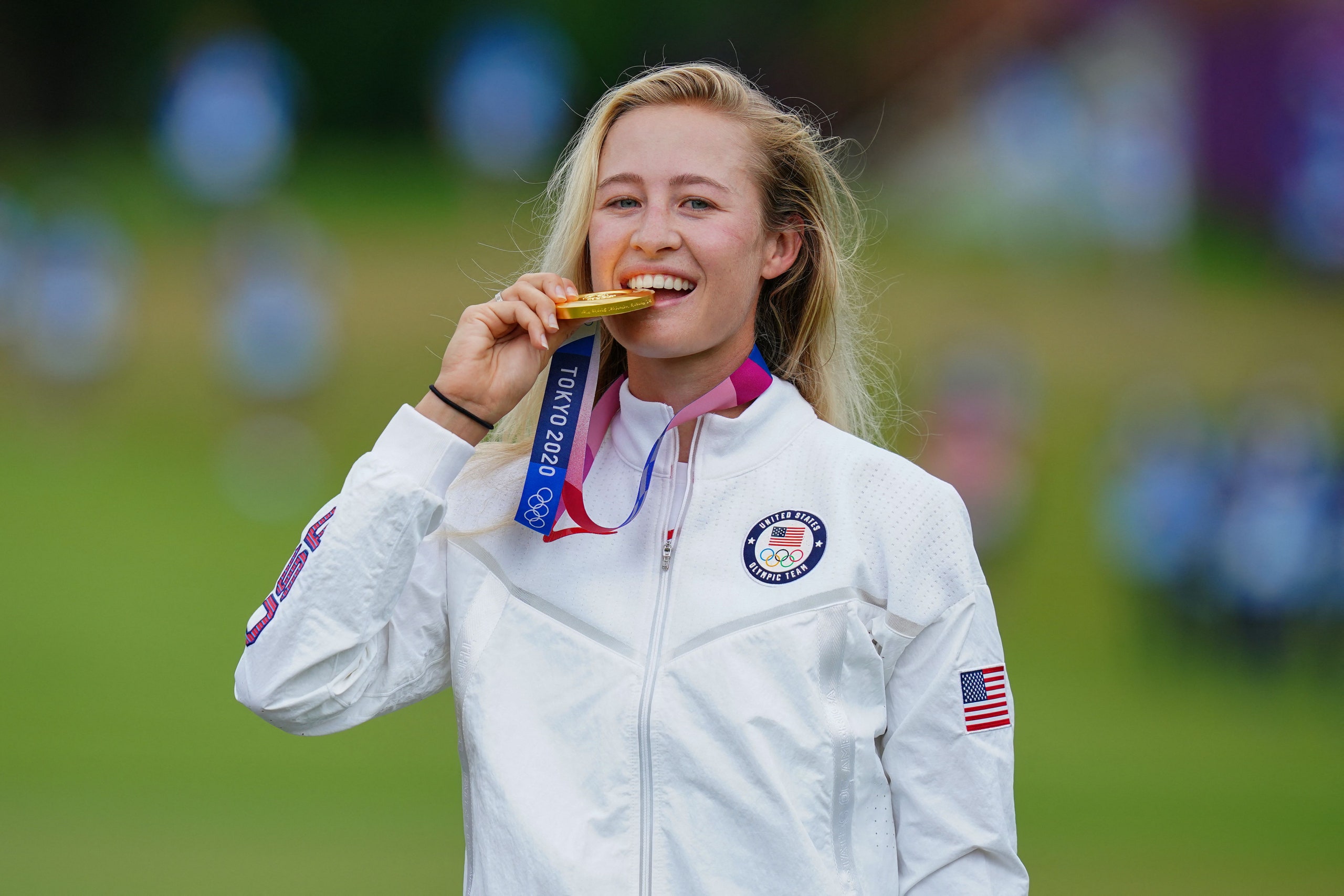 Nelly currently is a 23-year-old professional golfer on the LPGA Tour. At the time that this chapter is written, she has held the #1 ranking in the world for 26 consecutive weeks. This streak breaks the record for most consecutive weeks in the top spot by an American since they started keeping track of this statistic. She has seven wins on the LPGA Tour, including one major, the 2021 Women’s PGA Championship. Nelly also won the gold medal in women’s golf at the 2021 Summer Olympics in Japan. And, although 2021 was a banner year for Nelly, many are predicting that this 23-year-old will accomplish much greater achievements in the future.

So, what’s her secret? Because Nelly grew up in such an athletic family, she gives a lot of credit for her success to “their genes”. However, the truth is that Nelly has been practicing and preparing her whole life for this success. As a child, she was introduced to all kinds of sports in her hometown of Bradenton, Florida: ice skating, gymnastics, softball, tennis, and golf. “The truth is, my parents loved it because we were outdoors and being active,” Nelly recalled. “Anything where we were outdoors, they were happy.”

“Preparing my whole life” is no exaggeration. When Nelly was asked about the age that she began playing golf, she responded, “I started playing when I started walking.” The main reason for this is because her older sister Jessica had already seriously taken up the game. So, when Nelly turned six, she began taking lessons about 3-4 times a week. Then, when Jessica would play in tournaments, Nelly would tag along. And, eventually, Nelly began playing in these tournaments too. Sometimes Jessica would be the older age-bracket champion and Nelly would be the younger age bracket champion.

Nelly then followed in her sister’s footsteps and attended IMG Academy, a prestigious sports-focused high school in Florida. At IMG, Nelly received specialized instruction from top quality professionals. She regularly practiced 4-6 hours a day. Each day she worked on improving a different part of her game. She honed her skills on the driving range, chipping area, and putting green. And, this intense and sustained groundwork paid off.

At the age of 14, Nelly actually qualified for the Women’s US Open. With youthful innocence and braces on her teeth Nelly commented, “The Women’s US Open means so much to me because the past years I have been there every year, watching my sister, outside the ropes. Finally, this year, I get to be inside the ropes.” To make it a true family affair, her father caddied for her during the tournament. This in fact helped her make the cut, which is an amazing achievement for someone that age.

When she was 16, Nelly petitioned the LPGA to allow her to turn pro before her 18th birthday. Her application was accepted, so Nelly decided to forgo college and go directly to the pros. As a 17-year-old, she played on the Symetra Tour, the “futures tour” of the LPGA. She said the stress of that tour was more intense than anything that she had ever experienced because every shot counted toward qualifying for the LPGA Tour. If she could finish in the top 10 on the money list, she would earn her card on the LPGA Tour. Nelly managed to finish 9th, which meant she would play on the LPGA Tour at 18.

Older sister Jessica was waiting for her arrival. And it didn’t take long for Nelly to win on the LPGA Tour. When she did so, Jessica and Nelly became only the third pair of sisters ever to win an LPGA event. Then, in 2021, Jessica won the Diamond Resorts Tournament of Champions and, the following week, Nelly won the Gainbridge Tournament. This occurrence made them the second set of sisters to win back-to-back events on the LPGA. They both also earned spots on the 2019 Solheim Cup — where 12 members of the American team take on 12 members from the European team — and when the Korda sisters were paired together, they never lost a match.

With all the potential for sisterly rivalry, one might wonder how it all works out so well. First off, Nelly loves playing alongside her older sister whom she has always idolized: “She’s pretty much everything to me…I wouldn’t be able to imagine being on tour without her because I wouldn’t know where I’d be without her.” Jessica characterizes the relationship this way: “We are very competitive, but we are more supportive of each other than we are competitive. I think that’s been very healthy for us. When one of us is struggling, there is always someone there to pick the other one up.”

Going into 2021, the Korda sisters were on equal footing. However, Nelly had a breakthrough year. She won the PGA Championship in June and earned the #1 ranking in the world. In the following days, four female golfers were selected to represent Team USA at the Olympics. Nelly and Jessica earned two of those slots. Living up to her #1 ranking, Nelly delivered a hard-fought 1-shot victory for herself and America. “This is surreal,” she said moments after the medal ceremony. “You really don’t understand it until you’re in the position. It’s such an incredible feeling because at the end of the day, you’re not just playing for yourself, you’re playing for your country.”

These key victories have separated Nelly from just about every other golfer in the world. Being ranked #1 puts a bullseye on her back, but Nelly feels zero additional pressure. As her sister said, “She’s so fearless in what she does. I don’t know if it’s because of her age or her personality, but Nelly has always been fearless.” Golf Analyst, Amanda Blumenherst, plainly predicted, “I project Nelly to be the dominant golfer over the next several years.”

The reality, however, is that tomorrow is promised to no one, particularly in the fickle game of golf. Certainly no one knows what the future holds. Nelly understands this and maintains a level-headed perspective: “Perfect and sports just don’t go together. I just try to take it one tournament at a time, one shot at a time.” The one constant is Nelly’s work ethic. She began golfing at four years of age and has continuously, relentlessly, pursued improvement in her game. She continues to steadfastly work on her game. Practice and preparation are the keys to her success.  Based on this level of commitment to the game of golf, we all probably will be seeing a lot more of Nelly Korda in the upcoming years.

Nelly Korda is one of the 144 “Wednesday Role Models” featured in the Student Athlete Program. This program is designed to improve the character, leadership and sportsmanship of high school athletes. To learn more about this program and how you can implement it in your school: