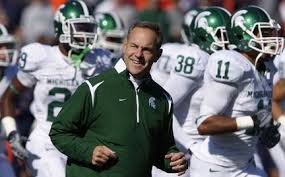 Yes, this is another sports related story and yes, it is one more story about my alma mater, Michigan State University. However, the lessons are applicable to anyone. Let me explain…

Max Bullough is from my hometown of Traverse City, Michigan. He was the senior captain, leading tackler and the heart and soul of the #1 ranked defense in the country. His nick name is, “The Computer,” for his ability to recognize the tendencies of the opponent and get his teammates in the correct defense.  He was selected 1st team Big-10, 3rd team all-American,and 1st team academic all-American.  The Rose Bowl meant everything to him. He had practically prepared his entire life for this moment. You see, his grandfather played for Michigan State University as did two of his uncles. One younger brother currently plays on the team and the youngest brother has verbally committed to MSU. To say that his blood bleeds green is not much of a stretch.

Despite all that it meant to him and all the time he spent preparing himself for this moment, Max Bullough “violated a team rule,” and was suspended from playing in the Rose Bowl, his final collegiate game. At this point, no one knows what he did to get suspended, but suffice it to say, he regrets it as much as anything he ever did.

Next Man Up: So, who could possibly replace this leader? Coach Mark Dantonio has a saying, “Next Man Up.”  Trouble is, Kyler Elsworth, was the next man up. Elsworth, a 5th year senior who never started a game. Ellsworth, a former walk-on who had never played a significant role in his collegiate career. On top of it all, Elsworth had less than a week to prepare for this new role in the heart of the defense.

With Michigan State University clinging to a 4-point lead in the waning moments of the Rose Bowl, Stanford was attempting to score the go-ahead touchdown. It was 4th down and less than a yard. Who do you think leapt over the line of scrimmage to stuff the fullback for no gain? Kyler Elsworth – the next man up.  Who was named the Most Valuable Defensive Player of the Game? Kyler Elsworth – the next man up. 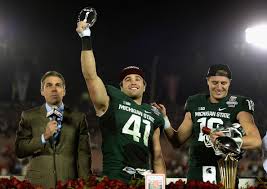 Accepting the Defensive MVP Award for the Rose Bowl

Life Lesson #1: Max Bullough teaches us that you should never get to big for your ‘britches.’ Even when you are at the top of your game, when you are looked up to as a leader, when everything is going your way… you still need to do things the right way, make good decisions and conduct yourself with character… every time.

Life Lesson #2: Coach Mark Dantonio teaches us that everyone is held to the same high-standard. I’m sure it just about killed him to suspend one of the best players on the team and diminish MSU’s chances for victory. It had to feel like disciplining your own child and keeping him from the one thing he wanted more than anything in his life. Still, Dantonio didn’t play favorites or provide preferential treatment.  You gotta respect that!

Life Lesson #3: Sometime in your life, you will be second-string. You can sit back and mope about it or prepare yourself for the eventual moment when it is your turn.  Some day, some where at some moment, you will be the next ‘man’ up. Believe in yourself and prepare for those occasions. After the game, Kyler Elsworth said, “I always thought I could play football at this level. I just knew I had it in me.”

P.S. Kyler Elsworth was taught the Character Development & Leadership Curriculum while he was a freshmen at Goodrich High School (MI).

1) Have you ever had to be the next person up? How did that go for you? How did you prepare for that moment?

2) If you were the coach, would you have suspended your best player because he/she violated team rules? Why or why not?

3) What makes this story so inspirational or such a feel-good story?