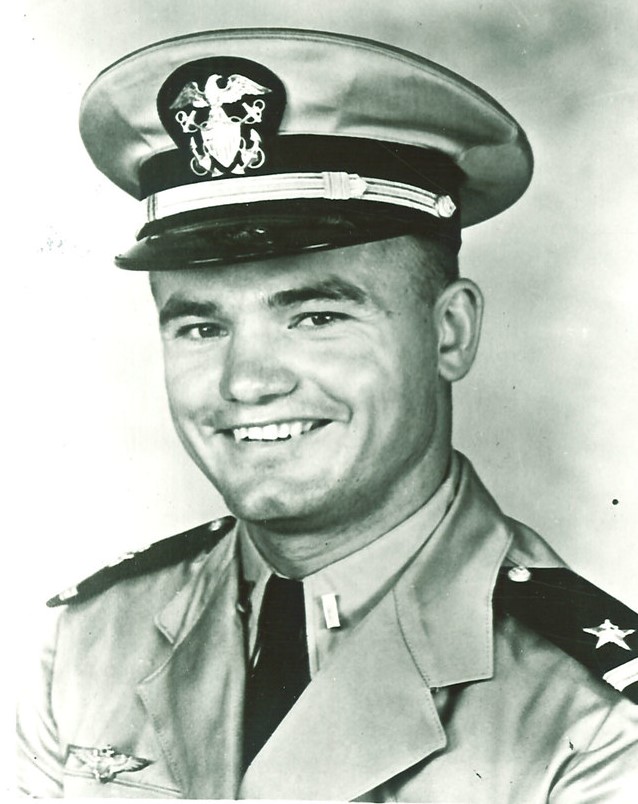 “Every man who I’ve admired in history has willingly and courageously served in his country’s armed forces in times of danger. It is not only a duty but an honor to follow their example the best I know how.”

There are 14 football stadiums in the Big 10 Conference. Of those, three are named after states, one is named for the team mascot, three are named Memorial Stadium to honor those who died for our country in wartime, two were named after wealthy alums who donated large amounts of money, one is named for a former university president, and one is named after a Civil War Federal Army base. However, only one football stadium is named to honor a former player. That university is the University of Iowa and that stadium is Nile Kinnick Stadium. He earned that extraordinary honor, not only for being an exceptional athlete, but also for his service to his country.

Nile was born in 1918. He is part of the “Greatest Generation,” the one that witnessed the Great Depression and World War II. He was raised in the small town of Adel, Iowa, along with his two younger brothers. His parents were devout Christian Scientists, which meant Nile was raised with values of discipline, hard work, and strong morals. Consequently, Nile excelled in the classroom and also on the athletic field. He played baseball, basketball, and football and, upon graduating from high school, was recruited to play college football. Many thought he would attend the University of Minnesota because it was the best at that time, but Nile chose the University of Iowa because its team was struggling. Nile was the type of kid who loved a challenge.

When he arrived on campus in 1936, Nile quickly learned how big that challenge was going to be. Still reeling from the Great Depression, the athletic department was nearly broke and the football team was in shambles. In fact, during Nile’s first two years Iowa won just two games. Their luck was so bad that they even lost 13 consecutive coin tosses. The one bright spot was Nile. “Nile Kinnick was the Iowa team. He ran, he passed, he punted, he place-kicked, and he also was a great defensive ball player,” observed Forest Evashevski, a legendary quarterback for the University of Michigan. Unfortunately, Nile suffered an ankle injury in 1938, and this hampered his contributions to the team in his junior year.

In a strange twist of fate, on the very day that Hitler invaded Poland — September 1st, 1939 — the Iowa Hawkeyes played their first game of the season. Nile, now in his senior year, was the team’s captain and his leadership and on-field performance were making a difference. “We saw the way this guy worked and we tried to emulate what he did,” said former teammate Bill Green. “He was the motivation.” In fact, Nile hardly ever left the field during a game. He played 402 minutes that season out of a possible 409 minutes and was responsible — by either throwing, kicking, or running the ball — for 107 of the 130 points his Hawkeyes totaled that season. In the process Nile set 14 school records, six of which still stand today, while leading his team to a 6-1-1 record. It was their best season ever.

Perhaps Iowa’s biggest victory that year was their 7-6 victory over Notre Dame. During that particular game Nile scored the winning touchdown, kicked the extra point, and later punted the ball to the ND 5-yard-line to seal the victory. “He was just about the strongest, toughest little guy you ever saw, unbelievable the hits he took, and he’d bounce right up like a rubber ball and huddle up,” reported teammate Bill Green.

At the end of that break-out season, every kid in Iowa wanted to wear Nile’s number 24 on their jerseys. He had won just about every major award in the country. He was a consensus First-Team All-American, and he won the Maxwell Award as well as the Walter Camp Memorial Trophy. Finally, on November 28, Nile became the first and only Iowa Hawkeye ever to win the Heisman Trophy. Even the Associated Press named him the Male Athlete of the Year — beating out Joe DiMaggio in baseball, Byron Nelson in golf and Joe Louis in boxing.

Clearly, everyone knew there was something special about Nile Kinnick. He was a real leader, which is why he was elected student body president his senior year. He was also very bright and graduated with straight A’s. As such, he gave the commencement speech for the class of 1940. Everywhere you looked, there were signs that read, “Nile for Governor.” As journalist Beano Cook pointed out: “He was an idol, he was a great person, not just a football player, and that’s the reason the people of Iowa loved him.”

Nearly everyone expected Nile to continue his football career and play professionally. However, he turned down a $10,000 a year contract to play with the Brooklyn Dodgers and instead enrolled in the University of Iowa Law School. He also became an assistant coach for the Iowa football team for the 1940 season. And, in whatever free time he had, Nile dabbled in politics. However, as it turned out, Nile’s future would not be in football, the law, or even politics. Instead, because much of the world was in the midst of World War II, Nile felt an obligation to serve in the US armed forces to fight fascism and the Nazi Regime. In 1941, he wrote the following:

Every man who I’ve admired in history has willingly and courageously served in his country’s armed forces in times of danger. It is not only a duty but an honor to follow their example the best I know how. May God give me the courage and ability to so conduct myself in every situation that my country, my family, and my friends will be proud of me.

Three days before the Japanese bombed Pearl Harbor, Nile was inducted into the US Navy. He trained for the better part of a year to become a fighter pilot. In 1943, he was assigned to the aircraft carrier USS Lexington and flew an F4F Wildcat. On June 2, 1943, Ensign Kinnick took off in his fighter jet for a routine training flight off the east coast of South America. At some point during the flight, his plane developed a major oil leak. He was too far offshore to make it to land. Moreover, the flight deck of the USS Lexington was crowded with planes. If Nile attempted to land on its flight deck he would have jeopardized the lives of his fellow servicemen. So Nile did what he had to do. He executed an emergency landing on the water. Rescue boats arrived within eight minutes, but they never recovered the plane or Nile’s body. Nile Kinnick died just 7 days shy of his 25th birthday.

His death shocked a nation and paralyzed Iowans. “It was like losing a member of your family — couldn’t believe it,” said childhood friend, Dean Jones. For the next six weeks, the Iowa campus was consumed with memorials and wakes. Former teammate Carl Vergamini recalled those moments, saying, “You had that feeling that so much was lost in the blink of an eye. A great future, lost forever.”

In the years since his death, Nile has been honored with numerous tributes. His jersey, number 24, is retired and therefore can never be worn by another Iowa football player. The coin that is flipped at the start of every Big 10 game bears his image. When the College Football Hall of Fame was opened in 1951, he was part of the inaugural class. In 1972, the Iowa football stadium was renamed to honor the life and legacy of Nile Kinnick. It should also be noted that when Sports Illustrated named their All-Century Team, Nile was on the 1st team.

Those closest to Nile knew that he had political aspirations. After all, his grandfather had served two terms as the Governor of Iowa and Nile was always discussing state and national issues and formulating ideas to create positive change. An example: During the time Nile was training to be a fighter pilot, he ventured into the deep south for the first time. It was also the first time that he was formally introduced to overt racism. He couldn’t believe how black people were forced to sit in the back of the bus or to use separate restrooms. He subsequently wrote a letter back home to express his strong desire to create bold changes in this country. Once again, Nile was sensitive to cultural flaws and, as always, thinking of solutions.

America lost 416,800 service men and women in World War II. Every single one of those individuals who made the ultimate sacrifice undoubtedly meant so much to those back home. However, the loss of Nile seemed to hurt a little more because of what he might have become. Long time Iowa senator Tom Harkin said, “With his record, his intellectual capacity, his grit and determination, I think he could’ve been president of the United States. I really do.” Iowa broadcaster, Jim Zabel, put it this way, “The people who knew him and grew up in that era are the ones who say, ‘Golly, if he just could have lived.’”

Nile is one of the 144 “Wednesday Role Models” featured in the Student Athlete Program. This program is designed to improve the character, leadership and sportsmanship of high school athletes. To learn more about this program and how you can implement it in your school: