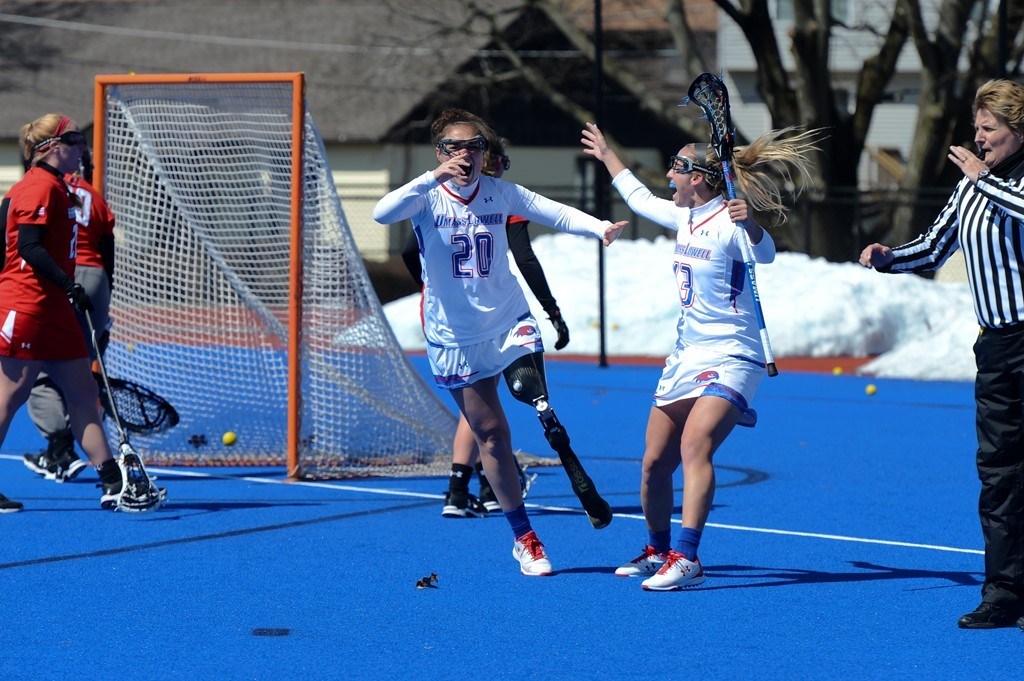 July 30, 2016, was a warm sunny day in Northeastern Massachusetts. Being summer, thousands of tourists took the ferry boat to Martha’s Vineyard. This was a popular vacation destination and two of the tourists were Noelle Lambert and her best friend, Kelly Moran. They were teammates on the varsity lacrosse team at UMass-Lowell. Both had just finished their freshmen year and Noelle was the team’s leading scorer. She was looking forward to a promising collegiate career.

The preferred mode of transportation on the island was a moped. Noelle volunteered to drive because Kelly previously had a negative experience on a moped. So, with Kelly riding on the back and Noelle at the helm, they set out to explore the popular island. Unfortunately, they didn’t get far. Once on the main road, Noelle lost control of the steering. She veered left into oncoming traffic and ran right into a dump truck. Noelle and Kelly were knocked to the ground. “I looked down at my leg,” Noelle later recalled. “and, it was gone.” Her leg was almost completely ripped off and she was bleeding profusely. A driver from another car took off his shirt and applied a tourniquet to keep Noelle from bleeding to death. He told her, “Everything’s fine, you’re gonna be okay.” Noelle responded, “No, my leg is gone.”

Shortly thereafter Noelle was airlifted from Martha’s Vineyard Hospital to Boston Medical Center. Once there, what was left of her leg was amputated. Many of her family and teammates were already gathered in the waiting room. One of the first individuals allowed in to see Noelle was her coach, Carissa Medeiros. Noelle asked,

“Am I still on the team?” Coach Medeiros replied, “You are the team.”

Noelle never wavered. Instead, she set a goal to continue to play lacrosse with her team. Somehow, some way, she was going to make it back. “It’s unbelievable how much she wanted to get back to business, right away,” said Coach Medeiros. However, the truth of it was that Noelle’s life was far from business as usual. She received her first prosthetic leg after a series of fittings and adjustments. Then it took weeks to learn how to walk again. It took almost a year for her to move on to a running prosthesis. This device is not easy to use. It had a blade where the foot would be and it was very flexible. Consequently, Noelle fell more than a few times as she learned to run again.

Often, near-death experiences profoundly change people. This was certainly true for Noelle. The accident dramatically changed her perspective on life and her work ethic. “Before my accident, I was the type of player that just went through the motions every day in practice and never put in any extra work,” said Noelle. “Now I had to put in the extra work. To be able to compete at a Division 1 level I had to put in three extra workouts a day, more than anyone else, because I had one less leg.”

Noelle also began to appreciate being alive and what life had to offer her. Even her teammates recognized the difference in her personality. “You will never see Noelle without a smile,” commented senior teammate Courtney Barrett. “She is such an ‘I can do this’ type of kid.” In addition, Noelle’s laughter played an important role in her life. She would laugh at herself when her leg fell off at inopportune moments or when she fell on her face. One time she even dressed up in an “I Hop Billboard” costume to playfully poke fun at her situation. “Get it?  ‘I Hop!’” Noelle pointed out with a smile.

Noelle continued to work toward her comeback. After redshirting in 2017, she rejoined her team for the 2018 season. The NCAA had cleared her running prosthesis and Noelle passed her team’s running test. “For her to come back a year after her surgery and be able to do better than when she did as s freshman with two legs, that alone was emotional,” said Coach Medeiros. Noelle’s new work ethic also served as an inspiration to the team.

“Okay, if she’s doing this then I need to be going 10 times harder because I can,” said Kelly Moran, the woman who sat on the back of that moped that fateful day. “To be able to look over and see her working hard just motivates everyone else to work as hard as we can.”

Finally, in a game against Hartford, April 7, 2018, some 616 days after her accident, Noelle returned to the playing field. It was near the end of the first half. And, without much delay, Noelle broke free off of a pick, received the ball from her teammate, shot, and scored. “It was a special moment I’ll never forget,” Noelle said. “That was really a great stepping stone for me, and it reassured me I would be able to play again and even perform better.”

Coach Medeiros called a timeout so that the entire team could run on the field to congratulate Noelle on her big moment. “Seeing the joy of my teammates was the best,“ Noelle said with gratitude in her heart. “None of it would have been possible if not for them.” It all seemed to be worth the work. It also seemed to matter more to her now. Although she had scored 16 goals as a freshman, this goal seemed a lot more special. It came as a result of a ton of hard work and a very different outlook on life. This was a time when nothing would be taken for granted.

In fact, Noelle had this to say after her lacrosse career ended: “Now when I look back at the accident, I’m grateful that it happened to me because it changed my life. It changed my perspective and what’s important in life. It changed the type of person I was, the type of athlete and everything.” Noelle also appreciated the support she received from her family, teammates, coaches, and the NCAA for helping her complete her intercollegiate athletic journey.

Noelle now has graduated from college and she has a new goal. The US Track Paralympic Team has asked her to compete for Team USA. This is a big honor for Noelle and she now has her sights set on the 2020 games in Tokyo, Japan. Given what she has overcome, and the type of person that Noelle is, it is difficult to doubt her future accomplishments.

Perhaps the coolest part of this story is Noelle’s desire to give back to other amputees. After her accident, several survivors of the Boston Marathon bombings helped her to adjust to her new reality emotionally and financially. Noelle wanted to pay it forward. So she started the Born to Run Foundation to help young people receive specialized prosthetics that will help them live a fun and fulfilling life. Individuals with amputated legs need different prosthetics to walk and run, and each one costs money. “Nobody realizes how expensive prosthetics are,” Noelle said. “I’ve been really lucky; I’ve had a couple foundations help me.” Noelle wants to continue this legacy of giving.

Noelle Lambert is one of the 144 “Wednesday Role Models” featured in the Student Athlete Program. This program is designed to improve the character, leadership and sportsmanship of high school athletes. To learn more about this program and how you can implement it in your school: