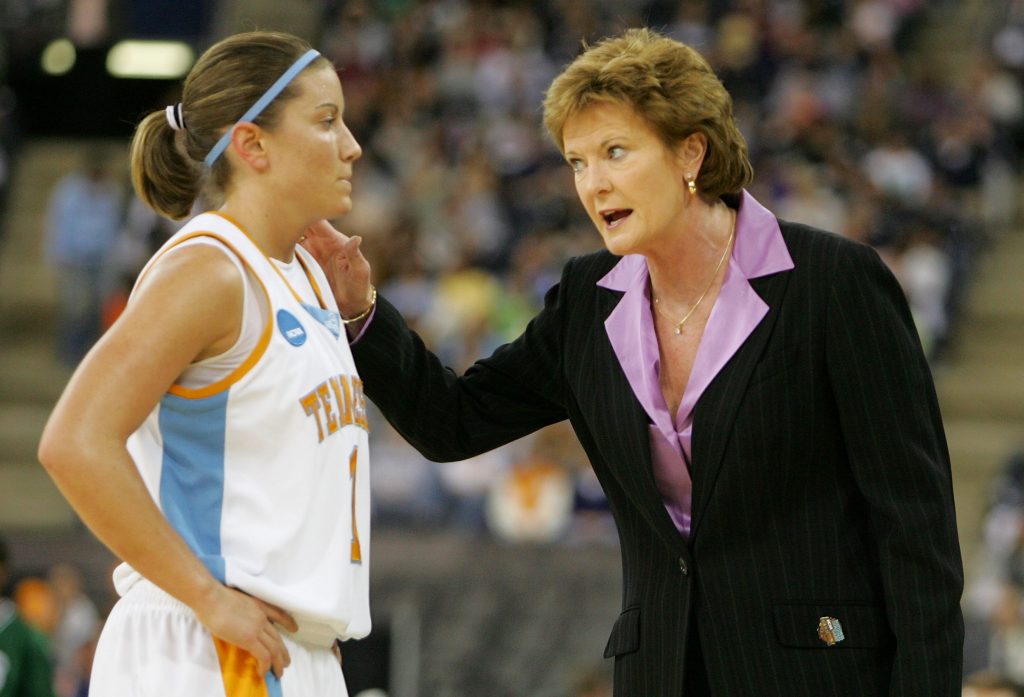 Kyra, I would take you to lunch, but I wouldn’t take you to war… Bridgette Gordon, quit being a baby!…Holdsclaw, sprint through the line! …Warlick, just get out of the drill. Put someone in who can throw a pass… I feel like I’m coaching a seventh-grade team! …You had no leadership tonight… Where’s your head? …You let every single one of these people down… Get off the court… You act like a whipped puppy …I went to Illinois to get a competitor and instead I got you! Don’t you hide on us!

In a word, Pat Summitt was tough. For 38 years she stalked the sidelines as the head coach of the University of Tennessee Lady Volunteer basketball team. She established a standard of excellence that all other programs tried to emulate. Players came to Tennessee to become the very best and that is what Coach Summitt demanded from all her players. No player, regardless of how great she was, got through the program without receiving heavy doses of yelling, icy-stares, sarcasm, finger-pointing and criticism. Former player Kyra Elzy once said, “She rode me like a Kentucky Derby Horse.” Another former player Abby Conklin was quoted as saying, “Yeah, I would recommend playing for Pat Summitt, if a year of counseling comes with it.” Pat kicked players out of practice, held workouts after losing games, scheduled early morning practices, and once refused to allow the team to use their own locker room for a month because they didn’t work hard enough to “pay the rent.”

The second word players used to describe Pat Summitt was love. The reason her players ran through brick walls for her was entirely due to the close relationships she formed with each one. Summitt always went the extra mile to demonstrate how much she cared. As often as the NCAA rules allowed, she provided home-cooked team meals. She took the team on road-trips to play tournaments all over the globe. She routinely wrote hand-written notes to encourage players through difficult times. She attended the funerals of family members and she took the overnight shift at hospitals when players were injured. Her house was continually filled with former players who returned to visit their former coach. “Coach, everybody asks me what you mean to me,” former player, Shanna Zoleman said. “I’ve never told you to your face how much I love and respect you, and what you did for me. You are my second mother.”

Perhaps the best word to describe Pat Summitt is leadership. Her stated purpose was to “change things in the most solid, demonstrable way for young women like me, help broaden their lives and choices through athletics. I wanted to help other women be strong.” To make this happen, Summitt unapologetically coached every practice like it was the national championship game. She set the standard of excellence and she pushed everyone to maximize their full potential. She believed that when you push a player to the brink, the mind and body respond by expanding. That’s called “growth”, and Coach Summitt was always ready to force the growth out of each player. For example, after the 10th loss of 1997 season, player Abby Conklin made the following statement to the team. “If there is a championship in us, that woman will get it out of us.” That team went down in history as the only national championship team to have 10 or more losses.

To fully appreciate Coach Summitt, it is important to understand her foundation. Pat was born in rural Tennessee in a log cabin with no running water. Her father was a farmer. The farm put food on the table for Pat, four older brothers and a younger sister. Farm life was tough and demanding, and Pat’s father treated her like another son. The children were expected to milk cows at 5 a.m. and again in the evening. They bailed hay and harvested the crops. This is where Pat learned her legendary work-ethic. “She could carry a hundred-pound bag of feed on one shoulder, and a sixty-pound bag of dog food under the other arm,” her brother, Tommy recalled. Pat also played basketball with her brothers at the foot of the barn. She even won her fair share of drag-races as a teenager.

Despite her strength and stamina, Pat grew up in an era where girls played a markedly different game of basketball than the boys. The girls played with 6 players. Three played defense and three played offense. Neither group was allowed to cross the mid-court line. At that time, it was believed that due to health reasons, women should not run the entire length of the court. Pat excelled at basketball, earning a scholarship at the University of Tennessee-Martin. Immediately after graduation from UTM, she took a job as an assistant basketball coach at the University of Tennessee. Two weeks later, the head coach quit. For $250 a month, Summitt became the head coach and never looked back.

Of course, things were very different back in 1974. There was no such thing as a woman’s athletic scholarship, so recruiting involved putting up flyers around campus and walking through dormitory hallways saying, “You wanna play?” Summitt was unsure about her basketball philosophies at the time, but she knew how to get people in shape. In her first practice, she demanded, “Hit the stairs!” Summitt fondly remembered, “Forty girls went up one set of bleacher stairs – and half of them quit at the top. They just never came down.”

In those early days, Coach Summitt swept the floors, pulled out the bleachers and taped ankles. She blared Linda Ronstadt 8-tracks as she drove the 15-person van to away games. In other words, she did everything a leader needed to do to get her program off and running. In her spare time, Summitt earned her Master’s degree and earned a silver medal playing forward for Team USA in the 1976 Olympics. Eight years later she coached Team USA to a gold medal in the 1984 Olympics.

In the meantime, the state of women’s sports began to change after Title IX kicked in during the mid-seventies. Tennessee’s athletic department began to increase funding and scholarships for its women’s sports. When her first women’s athletic director asked her what she envisioned for the future, she responded, “I want to fill the gym.” That goal seemed far-fetched since there were a mere 53 fans who witnessed Summitt coach her first game. However, Pat Summitt was a visionary. Years later, her teams would sell out arenas at Final Fours and out-draw the men’s team for home games on campus.

Pat is widely recognized as the most successful female coach of all time. Indeed, Sporting News named her the 11th greatest coach — of any sport — of all time. She was the only woman on the list. She was also named the Naismith Basketball Coach of the Century in 2000. She was the first coach, man or woman, to win 1,000 games. Her teams played in 18 Final Fours and won eight national championships. She won at least 20 games in all 36 years she coached, never missing an NCAA tournament. She also had a 100% graduation rate at Tennessee, which meant a great deal to her. Pat definitely knew how to lead. She inspired and motivated players to reach their full potential. She helped young ladies flourish in life. This is what she is remembered for and it is her enduring legacy.

Sadly, there is also another legacy for Pat Summitt. Sometime during the 2011 season, she had trouble remembering conversations and misplacing important belongings. Her lifelong friend, Esther Hubbard said, “It was talk, and repeat. Talk, and repeat. Something wasn’t right.” During games, this 8-time national coach of the year, had trouble recognizing schemes. She couldn’t remember the name of an offensive play she had run for decades. At the end of the season, she went to the Mayo clinic. The diagnosis was early-onset dementia, Alzheimer’s type.

She approached this disease the same way she approached every other challenge in her life – with determination and vigor. “With a diagnosis like this you don’t quit living,” she told her team. “You keep going.” She continued to coach the 2012 team to a 28-9 season, losing in the regional finals to the eventual national champion, Baylor. She retired at the end of the season. She spent the rest of her life in the company of her beloved son, Tyler, close friends and family. Pat Summitt died on June 28, 2016 at the age of 64.

With the help of an editor, Pat wrote an autobiography in her final years appropriately entitled, “Sum it Up.” She candidly wrote that she had trouble with the dates and differentiating the championships, but she could remember the players. She wrote, “I won 1,098 games, and eight national championships, and coached in four decades. But what I see are not the numbers. I see their faces.” When asked what she is most proud of, she responded, “The answer is easy – I’m proudest of them.” The world misses this great leader.

Pat Summitt is one of the 144 “Wednesday Role Models” featured in the Student Athlete Program. This program is designed to improve the character, leadership and sportsmanship of high school athletes. To learn more about this program and how you can implement it in your school: