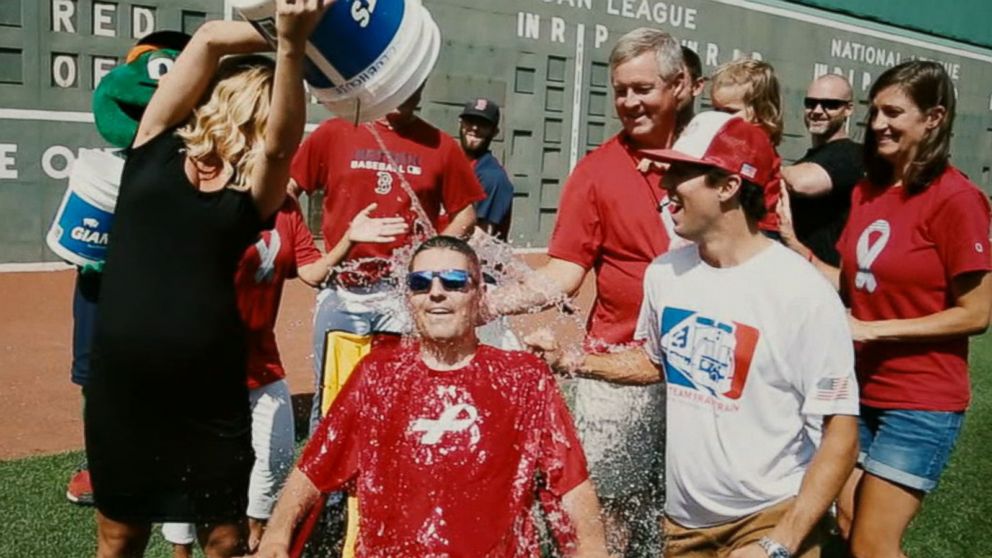 “I’m going to change the face of this unacceptable situation of ALS. We’re going to move the needle and raise money to fight.”

If you had a Facebook account during the summer of 2014, it was impossible not to view one of the numerous Ice Bucket Challenge videos. In just two short months, this phenomenon had become the most successful social media campaign in the history of the world. Seventeen million of these short videos were posted on Facebook. These videos were watched by 440 million people in 150 countries. Cumulatively, the Ice Bucket Challenge videos were viewed more than 10 billion times.

This is how it worked. A person would fill a bucket with some ice cubes and some water. This person would then dump the bucket of freezing water over her/his head. It was immediately followed by a familiar challenge that essentially said, “I am doing this to raise awareness for ALS. I challenge the following three people to do the same thing or donate $100 to the ALS Foundation or both. You have 24 hours.” This person then tagged three individuals in the Facebook video with the #ALSIceBucketChallenge.

This movement quickly became a phenomenon. Close friends and family did it. Celebrities like Oprah Winfrey, Justin Timberlake, and Taylor Swift did it. Athletes like Tom Brady, Derek Jeter, and Michael Jordan did it. You even saw former president George W. Bush posted a video in which he said, “I do not think it’s presidential for me to get splashed with ice water, so I’m simply going to write you a check.” Seconds later his wife Laura dowsed him with a bucket full of ice water saying “That check is from me.” The most watched video (12 million views) was provided by the richest man in the world, Bill Gates, principal founder of Microsoft, who was challenged by Mark Zuckerberg, founder of Facebook. However, most of the seventeen million Ice Bucket Challenge videos were posted by everyday citizens who cared.

The Ice Bucket Challenge raised $160 million for the ALS Foundation in just two months. To date, that number has ballooned to $220 million and is still growing. The idea was simple, it was fun, and it was effective. This movement changed the trajectory of research to cure ALS, a relatively obscure and very deadly muscle degenerative disease. Still, most people have no idea how this movement got started. Most have never heard the name, Pete Frates – the man behind the Ice Bucket Challenge.

Pete Frates was the second of three children of John and Nancy Frates. While still in elementary school, a physical education teacher grabbed Pete’s parents and said, “We call kids like Pete ‘One in Ten Thousand’.” Another teacher told his parents, “You know he has IT, you know that, right? He has IT.” What this educator and others were referring to is the right combination of compassion, athleticism, and leadership.

Pete was the classic 3-sport athlete who never specialized in one sport. During his senior year, he was the captain of the hockey team, football team and baseball team at St. John’s Prep in Beverly, Massachusetts. As he entered his senior year in high school, Pete sought an athletic scholarship to play baseball. He was determined to follow in his parents’ footsteps by attending Boston College. This, of course, was surprising news to head coach, Pete Hughes. “If the young man could not crack the starting lineup in high school,” he later said, “What were the chances that Pete could play at a D-1 program like Boston College?”

Little did this coach know that Pete would lead his Boston College team in home runs and stolen bases during his junior and senior years and eventually become team captain. As all of this played out, the coach developed a different view of Pete. “Pete brings a ton of energy to our team. He’s a leader and plays incredibly hard.”

Nevertheless, upon graduation, Pete went undrafted. He played in Europe for a while and then returned home to play for the Lexington Blue Sox, a semi-pro team just outside of Boston. Pete knew that he was never going to gear up for a major league team, but he couldn’t bring himself to give up the game he loved. He sold insurance by day and played baseball by night.

Then, early in the 2012 season, Pete’s batting average dropped by about 100 points. He began to notice other strange symptoms. He had trouble buttoning his shirt and holding silverware. He felt exhausted much of the time and his legs would give out on him for no apparent reason. In fact, one friend mistakenly thought Pete was drunk after he stumbled home from a local bar. Pete responded, “I wasn’t drunk last night. Something’s wrong. Something’s happening to me.”

Pete began scheduling medical appointments. After a battery of tests, the doctors asked Pete to come in to discuss their diagnosis. Pete asked his parents to join him. “I don’t know how to tell a twenty-seven-year-old this,” the doctor said. “Pete, you have ALS.” His parents asked the doctor for the treatment plan. “Mr. and Mrs. Frates,” the doctor began. “I’m sorry to tell you this, but there’s no treatment and there’s no cure.” Pete’s mother ran out of the room and screamed “Oh my God! My son’s going to die.”

True to form, Pete maintained a positive attitude. He was determined to beat the disease. And once a leader, always a leader. Within a few days of his diagnosis, Pete gathered his family and set the tone. “What an amazing opportunity we now have to change the world,” Pete said. “I’m going to change the face of this unacceptable situation of ALS. We’re going to move the needle and raise money to fight.”

Just like he fought his way onto the Boston College baseball team, Pete finagled an appointment with one of the top ALS doctors in the world, Dr. Merit Cudkowicz. During the exam, Pete asked, “How close are you to finding a cure?” She responded by telling Pete that there was not enough money to properly research a cure. Pete asked directly “How much do you need.” Doctor Cudkowicz replied, “I don’t know, Pete. Probably a billion dollars.” Pete looked her in the eyes and said, “I’m going to get working on that.”

And, he did. Pete was never more focused than he was at that moment. Pete believed that this was his purpose in life. “There’s a reason why I’m so young and got diagnosed with it,” he said. “I want to get out there and captivate people and get some momentum for this disease. I’m going to change this disease forever.”

Pete maintained a positive attitude and kept living life to the fullest extent possible. He made a bucket list of things to do while he still had strength. He traveled. He bought a boat. He went to work for Boston College as the director of baseball operations. In June of 2013, Pete married his girlfriend, Julie. In 2014, Julie gave birth to their daughter, Lucy. Becoming a father meant everything to Pete. Lucy has become his purpose for living. Pete was determined to defy the odds and watch Lucy grow into a young woman.

In the summer of 2014, Pete watched a video of a friend dumping water on his own head. Pete smiled and said, “This is exactly what we’ve been waiting for. This is it!” Pete asked his brother, Andrew, to go to the gas station and buy a bag of ice. Andrew then ran out in the rain and dumped ice water over his head from a dirty trash can. He then challenged his dad and the ALS Ice Bucket Challenge was off and running. The videos started pouring in and Pete began “liking” each video on Facebook and tagging his vast array of powerful supporters. Some 17 million videos later, this phenomenon had raised $220 million dollars to help fight ALS. Amazing.

Please understand, this disease has not shown Pete Frates any mercy. ALS treated him like every other unlucky soul with this diagnosis. This 6’ 2’’ 225-pound young man suffered greatly. At first, his speech slurred, he fell frequently, and his fingers lost their agility. As time progressed, he needed a wheelchair. He could no longer feed or bathe himself. As the disease progressed, his organs broke down one by one. Pete lost his ability to speak, his ability to control his bowels, and his ability to breathe without assistance from a ventilator. As 2018 ended, Pete — a husband and father — was virtually a prisoner in his own body. He was unable to move or communicate. Pete required around-the-clock care costing his family about $90,000 a month on medical bills. Nothing about ALS is easy or fair. And, so, just like so many victims before him, on December 9, 2019, Pete Frates died.

Pete ultimately lost his battle with ALS, but his dream remains alive. Pete didn’t want one more person to be diagnosed with the death sentence known as ALS. Pete was irate that, over the 75 years since Lou Gehrig’s Disease became recognized widely by the public, its course and consequences have remained unchanged. As his former coach said, “It’s known as Lou Gehrig’s disease, but it will be known as Pete Frates’ cure.” It’s now up to us to keep the legacy of Pete Frates alive. If you can donate money to help fund a cure for ALS, please go to www.petefrates.com or http://www.alsa.org/donate/.

Pete Frates is one of the 144 “Wednesday Role Models” featured in the Student Athlete Program. This program is designed to improve the character, leadership and sportsmanship of high school athletes. To learn more about this program and how you can implement it in your school: