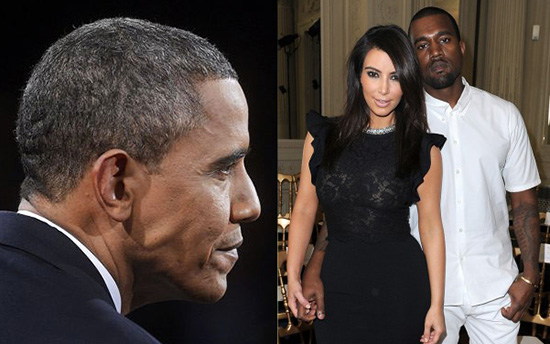 Earlier this month, President Barack Obama criticized reality TV, and in particular Kim Kardashian and Kanye West, saying that their reality TV shows have helped create a generation of youngsters who are obsessed with wealth and celebrity. Specifically, the president said, “The American dream involved some pretty basic stuff – a good job where you felt some security, a good education… People felt if they worked hard they could get there… I don’t think people went around saying to themselves, ‘I need to have a 10,000-square-foot house’… I think there has also been a shift in culture.”

Kim Kardashian’s mother, Kris Jenner, was quick to defend her daughter and to provide a retort to the President. Jenner said, “I wasn’t aware that you could only set the bar so high and that we could only dream so big. I was taught, Dream big, work hard and you could have whatever you wanted.” She went on to say that their reality TV shows employ hundreds of people.  You can listen to more of her comments below:

Author’s Perspective #1: When I heard the president make his comments, I found myself nodding my head in agreement. Reality TV really has altered the definition of success. The culture is obsessed with fame and fortune. It gives young people a false impression of what it takes to be successful.

Author’s Perspective #2: I think the main point of President Obama is that the path to fame is misguided. In previous generations, we held ticket tape parades for individuals who achieved greatness – for inventors like Henry Ford, innovators like Amelia Earhart, U.S. soldiers who were victorious in WWII and astronauts who landed on the moon.  Now, we hold parades for athletes who win games for entertainment. Reality TV further erodes the meaning of fame, showing young people that they can be famous for… well, nothing. Reality TV puts fame before accomplishment and celebrity before talent. The end result is too many young people not aspiring to achieve, produce and contribute to society.  Why? Because that is not celebrated.

Author’s Perspective #3: I thought this was a one-sided case until I head the comments by Kris Jenner. It made me pause. Haven’t we always had celebrities who made a ton of money and lived in big houses, drove nice cars and vacationed in exotic places? Didn’t kids in the 1950’s want to be like the stars in old Hollywood? Didn’t the kids in 1960’s want to live like Elvis, Frank Sinatra or the Beatles? In the 80’s kids watched Lifestyles of the Rich and Famous. Is this any different? Maybe I’m just being too “old school” on this? Does a reality TV star have some kind of redeeming qualities? Are the Kardashians just a modern day version of some starlet from Hollywood?

But then, I came to my senses and decided, “Nah, the President has it right.  I am with him on this one.” I want young people to look up to Barack Obama. He has achieved and accomplished. He is serving his country as a public servant. Achievement and leadership led to fame. Reality TV stars become famous first, and I am not sure about their contributions and achievements?

Your Turn (follow us & tweet responses to @CDandLeadership using #CDandL):
1) Twitter Question: Do you side more with President Obama or with Kris Jenner on this issue? Why?
2) Do you think reality TV that showcases fame and celebrity are changing the definition of what it means to be a success? If so, is this a problem?
3) Does our culture focus too much on fame and success without substance? Shouldn’t we have substance, talent and achievement first, which then leads to fame?
4) Do you aspire more to be like Bill Gates or Kanye West? Would you rather be the doctor who cures cancer and doesn’t get famous or Kim Kardashian who is famous without achievement?