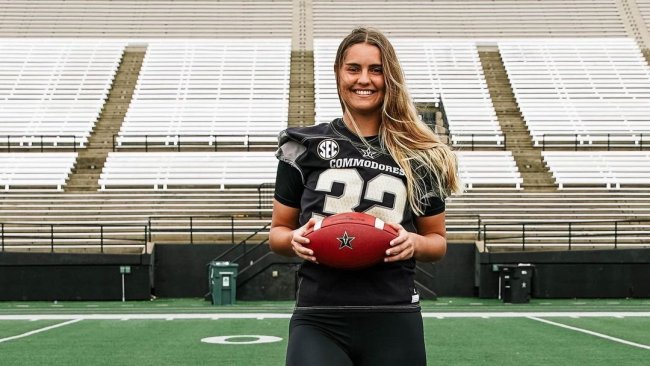 “I want to change that narrative and show that playing like a girl is something you want to strive for.”

On Saturday, November 22, 2020, Sarah Fuller celebrated with her Vanderbilt University women’s soccer team. They had just won the Southeastern Conference (SEC) championship by defeating Arkansas 3-1. Sarah served as the starting goalkeeper for the team, and allowed only one goal. For Sarah, this was such an accomplishment — such a tremendous feeling. “If someone told me that I’d have to go through three and a half years of struggle for this to happen, I’d be like ‘yes, okay, that’s fine,’ because this has been pretty amazing… Being able to hold that trophy with my teammates was just incredible.”

This championship was her last soccer game of the 2020 season. The NCAA had canceled the national championship tournament because of the Covid-19 pandemic. So Sarah and her teammates headed back to their respective hometowns to be with their families on Thanksgiving. However, Sarah’s holiday plans were about to change. You see, the Vanderbilt football team suddenly had a rash of Covid cases and they were struggling to field a team for their upcoming game against Missouri. In fact, the starting kicker and the backup kicker were being held out of the game because of their exposure to the virus.

There now was no football player capable of reliably kicking extra points or making a field goal. So Vanderbilt head coach Derek Mason immediately began making phone calls. One of those calls was made to Ken Masuhr, the associate head coach of the women’s soccer team. After explaining the dire situation, Coach Mason asked if Mashur could recommend anyone on the soccer team. Without hesitation, Coach Masuhr suggested their starting goalkeeper, Sarah Fuller, because she had the strongest leg on the team. Shortly thereafter, Sarah was asked if she wanted to try out for the position at practice that day. Sarah’s enthusiastic response speaks for itself:

For Sarah, kicking footballs seemed like a natural transition. After all, goalies routinely place the ball on the ground and kick the soccer ball to mid-field, or beyond, to advance the ball down the field. Sarah had earned an assist during the SEC soccer tournament by kicking the ball to one of her teammates who then scored.  The obvious difference is that a soccer ball is round and a football is oblong. Sarah adjusted easily. She consistently made field goals from 35 yards in practice the following week. She said her most difficult transition was having to wear football pads and a helmet — something she had never done.

The football team welcomed Sarah with open arms. There was no harassment by the players, or any sense that this was a publicity stunt. The football team needed a kicker and Sarah had the skill set to contribute to the team. Team punter, Harrison Smith watched her in practice on Tuesday and said, “I didn’t know what we were going to do, but she went out there and started doing well, and it was like, ‘Thank goodness.’” After her initial practice, Sarah was greeted with cheers and high-fives. “All the guys have been amazing and super uplifting,” said Sarah. “The entire Vanderbilt football staff has been incredible.”

Other females had played college football before Sarah. Liz Heaston, a soccer star at Willamette University, attempted four extra-point attempts in two 1997 games as the replacement kicker for the football team. Katie Hnida suited up for the University of New Mexico and attempted an extra point in the 2002 Las Vegas Bowl against UCLA. And the next year, Hnida became the first woman to score in a Division I-A game when she kicked two extra points in a regular season game. Finally, Becca Longo became the first female to receive a collegiate scholarship to play football at Adams State University. However, she never made it on the field. Now, on this Saturday, November 28, Sarah was hoping to become the first female to play football in a Power Five collegiate football game.

When game day came, Sarah selected jersey number 32. This was her number on the soccer team. On her helmet, she placed the meme “Play Like a Girl.” She ran out of the tunnel that day with her team and she was ready to do her part. Her parents were on hand to greet her from the stands. “She embraces a challenge. She is excited about it,” said her dad. “We were excited for her and the moment in history.” And, on that late autumn day, it seemed like the entire world tuned in to the game to watch her perform. ESPN College Gameday ran a five-minute feature on Sarah.

Sarah paced the sidelines waiting for her opportunity. Unfortunately, the 2020 Vanderbilt football team was not very good; They had not won a game the entire season. And, on this auspicious day, they did not score any touchdowns, so Sarah could not kick any extra points. The offense also did not get within field goal distance, so she also was not needed for that. Sarah’s only moment came when Vanderbilt kicked off to start the second half. Doing as instructed, Sarah kicked a 30-yard squibber down the right sideline. Vanderbilt quarterback, Mike Wright later commented, “There were people on the sideline literally starting to cry — the emotion, the crowd, everybody cheering her on — the entire stadium was electric.” The SEC even recognized her contribution by naming her the SEC Player of the Week.

The following week was a home game against rival Tennessee. In this game, the offense scored two touchdowns. Sarah made history again by connecting on both extra-point attempts, thereby becoming the first woman to score in a Power Five college football game. After each kick, she was mobbed by her teammates and given high-fives. The referee even made sure she received the ball following the first successful kick. Sarah had earned her way onto the team and into the hearts of many college football fans.

Sarah is extremely happy that she had the enthusiasm to “go for it” and the courage to say “yes.” She will tell you that her experience was an awesome journey. At the same time, she understands the larger significance. On reflection, Sarah said:

“I just never thought I could impact this many people. And the fact that I am encouraging all these little girls to do big things — why, I’m like speechless. At the end of the day, if I can inspire young women to do what they want to do and make their dreams come true, that’s incredible.”

Still, Sarah is humble enough to know that other women in sports have done a lot more than her. As such, she leaves us with this message: “Women in sports deserve this amount of coverage for women’s sports. Those women work so hard, doing what they do. NWSL, WNBA, all those women’s sports organizations work so hard. I totally believe they deserve that attention. They deserve that recognition.”

Sarah Fuller is one of the 144 “Wednesday Role Models” featured in the Student Athlete Program. This program is designed to improve the character, leadership and sportsmanship of high school athletes. To learn more about this program and how you can implement it in your school: