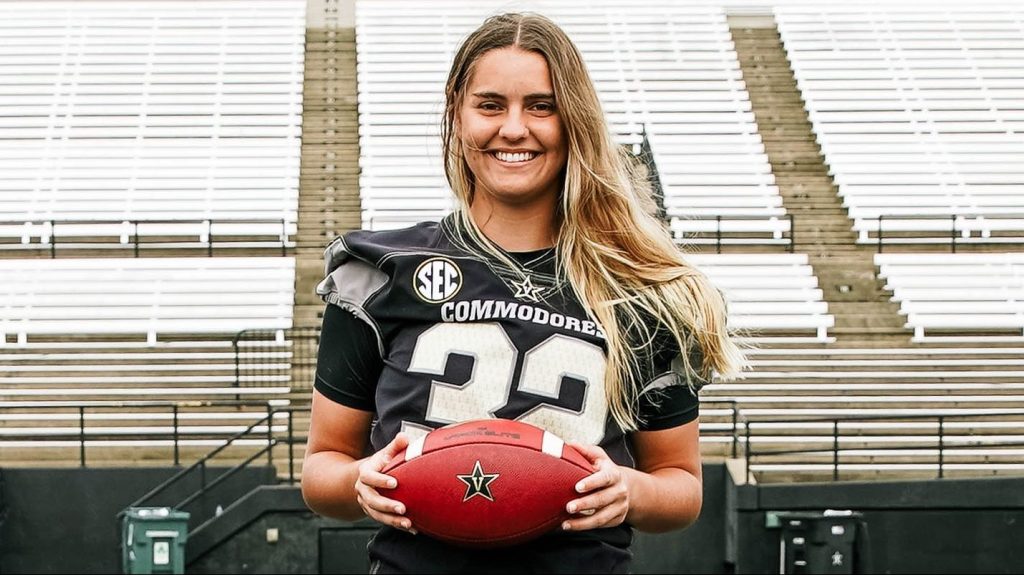 Two weeks ago Sarah Fuller was the goalie for Vanderbilt University, anchoring her team to the SEC Championship. After the game, she began planning a trip home for the holidays to spend with her family. However, she received a phone call from her coach. Apparently, the 1st, 2nd and 3rd string kickers for the Vanderbilt football team were diagnosed with Covid-19. The team was in a bind and began calling around campus to find someone to fill in. Sarah’s coach recommended her. When she heard about the opportunity, Sarah replied, “I’ll be there within the hour.”

For the first time in her life, Sarah donned shoulder pads and a helmet. She practiced for a week, this time with a new kind of ball. When game day arrived, she wore jersey number, 32, the same number she wears when playing goalie. On her helmet, she placed a quote, “Play Like a Girl.” Now, unfortunately, the Vanderbilt football team is not very good this year. They never scored a touchdown and didn’t even get close enough for a field goal. The only opportunity Sarah had to play was when her team kicked off to start the second half – not exactly a Rudy story. Still, Sarah became the first woman to play football in a Power Five football game.

Sarah performed her singular duty admirably. After the game she was interviewed and spoke proudly of her experience. “It’s just so exciting that I can represent the little girls out there who wanted to do this or thought about playing football or any sport, really,” Sarah said after the game.

Your Turn: What do you think about Sarah playing in this football game this weekend?